Expat on Shanghai's pandemic fight: 'Neighbors are a silver lining' 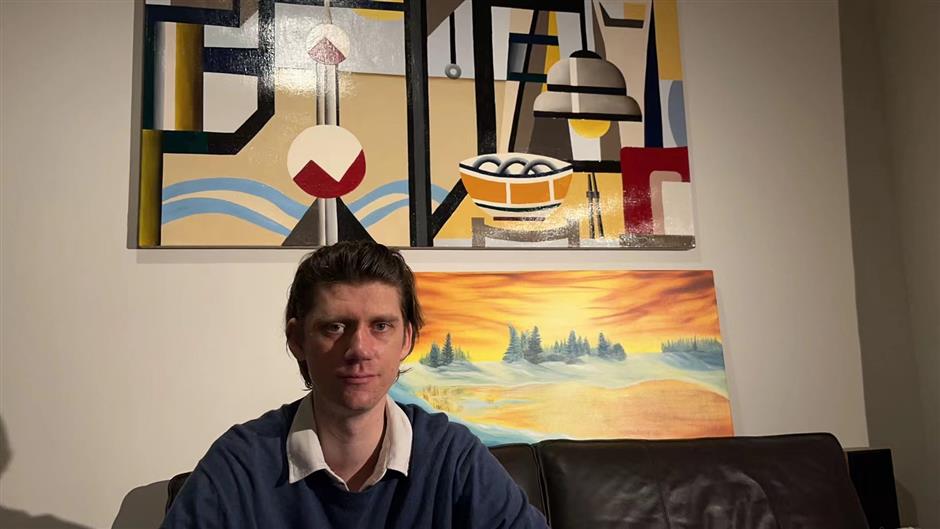 William Andrew, a Dutch expat in Shanghai, has created an oil painting to express his feelings about experiences during the current resurgence.

William Andrew, an expat from the Netherlands who lives in Waigang Town of suburban Jiading District, said he hardly knew his Chinese neighbors until the resurgence of the COVID-19 pandemic last month.

In an interview with the town media center, the Dutchman, who has been in Shanghai for more than three years, opened his heart about the human face of the pandemic.

Andrew, better known among his neighbors as Danny, lives with his Chinese wife in a residential complex in Waigang. They both work as exhibition planners.

The couple signed up to serve as community volunteers in early April, inspired by the examples set by their neighbors.

"Even a lady we know who has back problems signed up and helped distribute food packs to neighbors late at night," Andrew pointed out. "We're younger and sure we should also step forward."

However, when Andrew turned up at the neighborhood committee, he was told that the community already had enough hands.

Considering that Andrew was still recovering from his wounded cervical vertebra, he was put on "reserve," but still, he figured that there must be something he could do for his neighbors.

Then, some casual conversation in the residents' WeChat group put an idea into his mind.

"Some neighbors lamented that they hadn't eaten bread for a long time, and there I thought, why not make some for them?" he stated.

Andrew, who is good at baking bread, wanted to make some toast, but since he didn't have enough yeast at home, he baked some lean bread instead since less yeast is needed in making that kind of bread.

Later, with yeast "sponsored" by his neighbors, he managed to make some toast for them.

Andrew shared his homemade bread with his neighbors by putting it in bags that hang on the the fences of his compound, and the bread story led to more interaction between the couple and their neighbors. 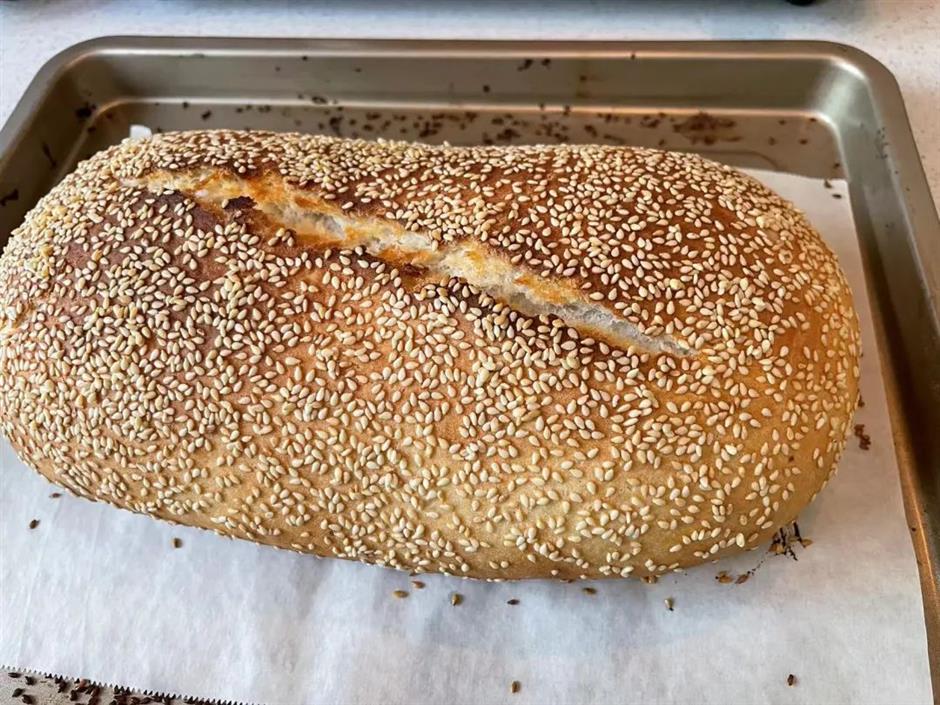 Like some other local residents who have endured shortage of things during the lockdown, the couple found themselves in a WeChat group with neighbors in which they traded or bartered items with each other.

Once, they exchanged detergent for some rice, but then someone posted that three elderly people at his home were running out of rice.

"We decided to give the rice we got to them because those elderly people probably couldn't go without rice, while we can manage with Western food," Andrew noted.

In return, the couple got a large pack of toilet paper from the thankful neighbor. "In these times, neighbors are like a silver lining for the dark clouds," he observed.

Such heart-warming stories have been occurring in the residential complex regularly, and one such incident left a mark on the Dutchman.

Three young men who live together but don't cook turned to their neighbors for help after eating instant noodles for more than 10 days. They just wanted some eggs, but neighbors were mobilized by a volunteer to prepare a tableful of dishes for the trio, Andrew recalled.

Inspired by the heart-warming stories in the neighborhood during the lockdown, Andrew created an oil painting which he said is an expression of his feelings.

Under the golden sky, some pines by a tranquil lake stand proudly in thawing snow.

"Winter will finally go away, and the earth will wake up again as long as there's sunshine," he said. 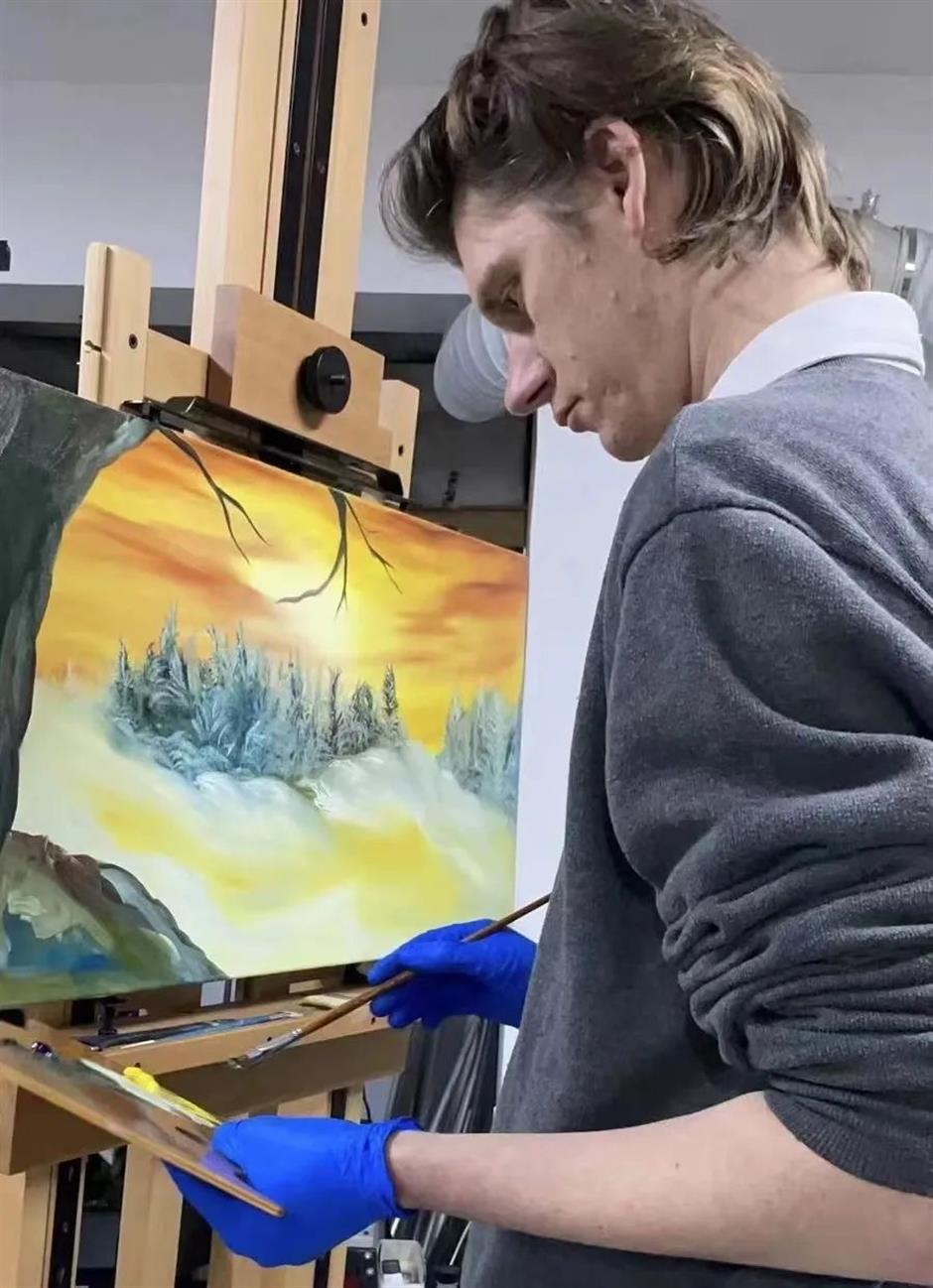 Andrew works on his oil painting.