Shanghai consumers spent strongly during the 618 mid-year online shopping festival, the first nationwide cyber campaign after the two-month citywide lockdown, but their spending habits have changed.

Besides spending on traditional retailers like JD and TMall, shoppers paid more attention to livestreaming and social media and delivery efficiency became a more important factor.

Between June 1 and June 18, Shanghai shoppers spent the most nationwide on Douyin, the Chinese equivalent of TikTok, followed by consumers in Chongqing, Beijing, Chengdu and Guangzhou.

Those born after 2000 have become the "new force" of the online shopping spree, with purchases increasing by 164 percent year on year, according to Douyin.

Many sales on Douyin come from livestream selling, popular with the younger generation and filled with opportunities and surprises.

Tutors-turned-livestreamers at New Oriental Education have become a nationwide buzz recently, with bilingual livestreaming. Within several days, they attracted more than 10 million new fans and created daily GMV, or Gross Merchandise Volume, of more than 10 million yuan (US$1.5 million). GMV is a key measure of online sales. 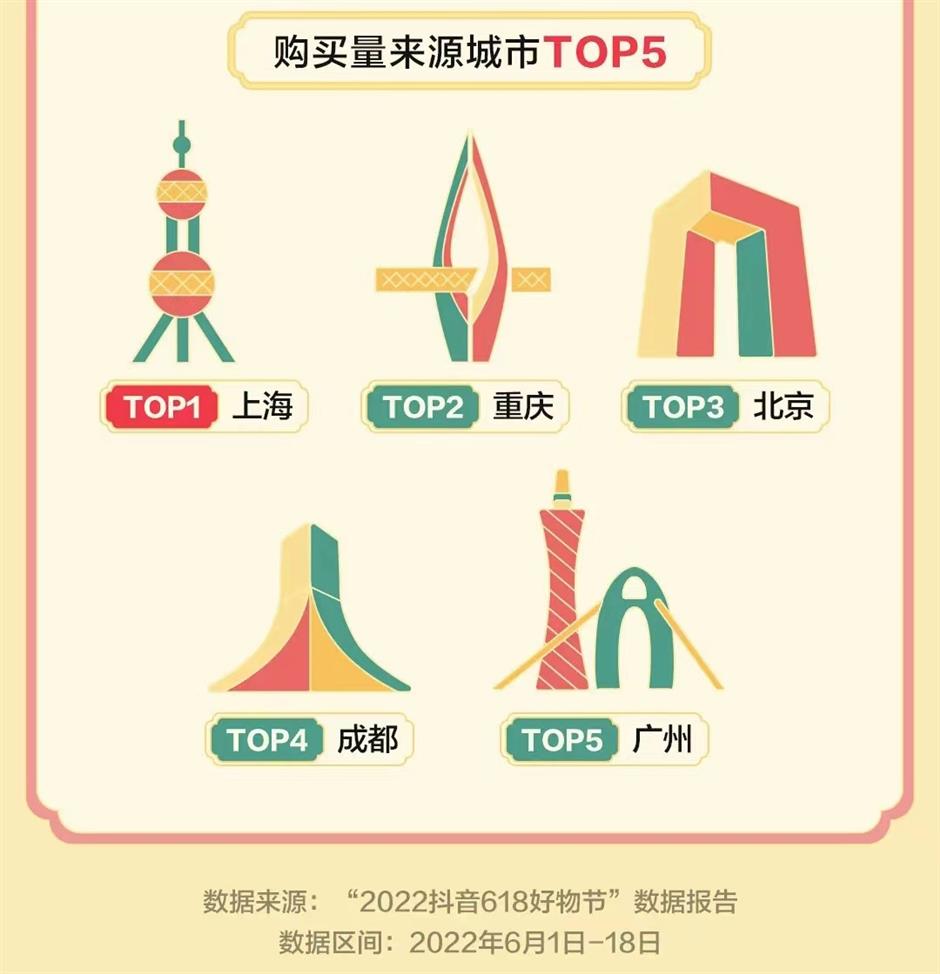 Shanghai consumers spend the most nationwide on Douyin, followed by shoppers in Chongqing, Beijing, Chengdu and Guangzhou.

With the post-pandemic recovery and digital economy developing, traditional retailers are speeding up digitalization.

It's a way to reach users directly at low traffic cost, according to Shanghai-based Weimob, which offers IT services for brands to open mini-stores in WeChat.

More than 58 percent of Chinese firms have touched users through private domain while 21 percent firms plan to do so in the near future.

Chinese consumers spend 1.5 hours on average every day in the private domain sector, fueling the booming development of WeChat and Douyin, according to a recent report issued by the China Chain Store & Franchise Association and Weimob.

Until June 19, Shanghai's delivery order volume had jumped 237 percent compared with the same period last month. During the online shopping festival, local consumers splurged on instant food, pet products and digital gadgets, with sales volume jumping five to ten times, according to Shanghai-based Dada, an on-demand retail and delivery service provider in which JD has invested.

Nationwide, the single-day transaction volume on June 18 exceeded 600 million yuan on Dada platform. The JD's Shop Now, an on-demand service for products delivered as soon as "within one hour," increased by 400 percent year on year on that day.

Dada's service, including JDDJ and Shop Now, is a part of "a responsible supply chain" and becomes a key driver for offline retailers and brands' growth, the company said.

Shanghai consumers are sensitive to delivery efficiency and speed, after facing citywide lockdowns in the past months, industry insiders said.