Shanghai dining: the thrill and challenge of finding a place to dine out 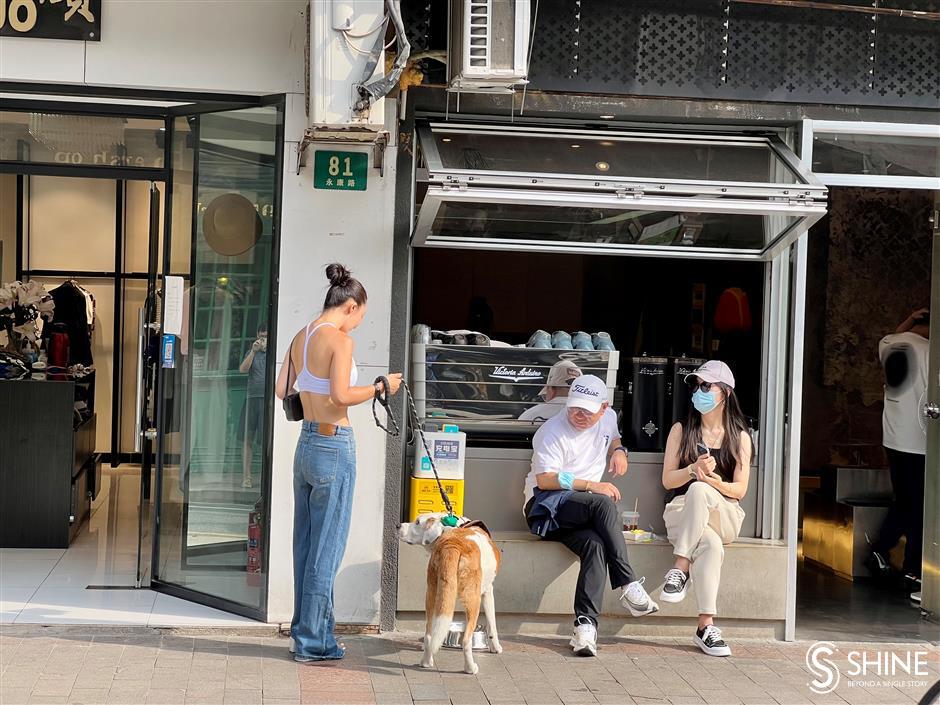 A coffee shop on Yongkang Road. Most restaurants in downtown Shanghai do not allow inside dining.

Some Shanghai diners have been having speakeasy moments in restaurants lately, with shady outside glass, dark rooms, no photos, low-key conversation, and a watchful eye out for strange people who look like they want to listen in.

The catering industry has been hurt by the lockdown measures, and many residents are hoping that restaurant dining will resume soon as a sign of normalcy.

"I always open my arms to poems and lands far away. The recent wish list is fine dining in restaurants with friends," said Cookie, a Lonely Planet author and a gourmand fan based in Shanghai. She used to dine outside two or three days a week before the lockdown.

Dining has a deeper meaning for Lao Shang. As a real estate company officer, he finds it nearly impossible to find a place in the downtown to meet clients and business partners.

"Socializing is important for business development," Shang said. "If the restaurants open, it is a sign that the hustle and bustle of city life are back." 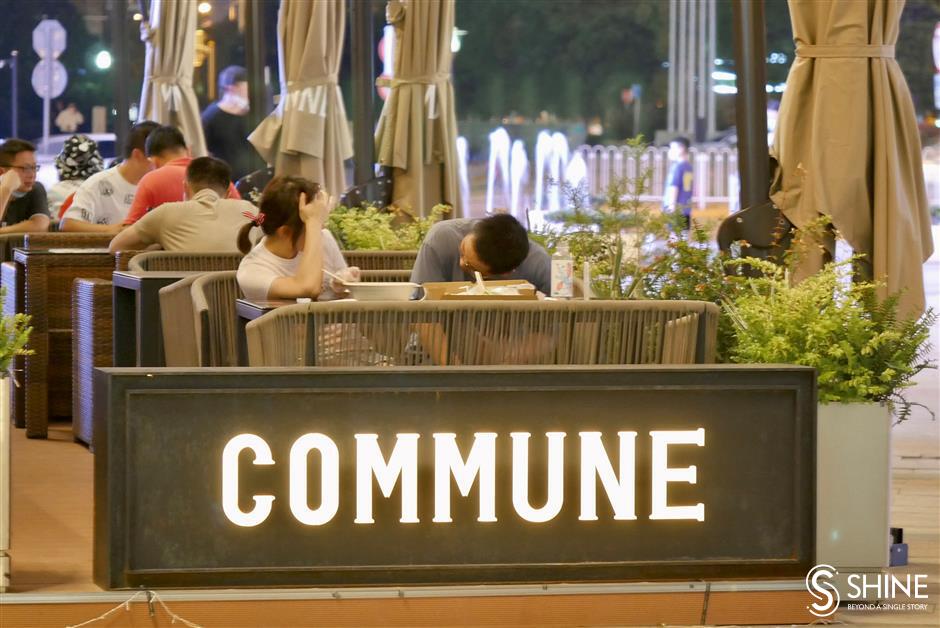 It is still possible to eat at a table outside in some places.

Since June 1, some cafes and restaurants opened briefly before being forced to shut again over recurring cases.

Except for the three suburban districts of Songjiang, Fengxian and Chongming, all other eateries in Shanghai are prohibited from offering dine-in service, according to a notice issued on Monday by the Shanghai Commission of Commerce.

The policy was strictly followed. Five Guys on Huaihai Road M. closed its streetside entrance and now only serves burgers and drinks for pickup and takeaway.

Most restaurants have put up clear signs saying "No Indoors Service" or "Please Don't Sit." 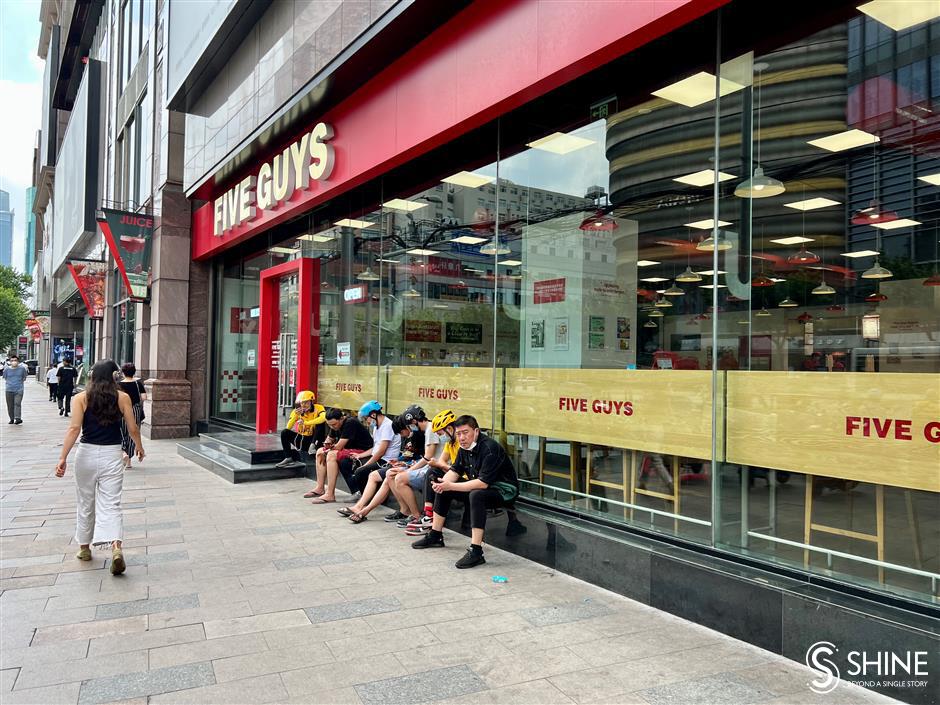 Delivery workers outside Five Guys, which has closed its streetside door

"We've been told not to put tables and chairs along the roadside or we'll be fined," a coffee shop employee said.

A few small establishments remain open, but only to "VIPs and acquaintances."

An Italian restaurant in Huangpu District admitted to allowing outdoor dining for "old clients and friends" for about 20 people. It, however, insists on reservations while discouraging walk-in dining.

Last week, it allowed some guests to dine indoors because of the heat or rainy weather. However, with the latest restriction, it won't be able to do so now, according to its manager.

In Xuhui District, a Chongming cuisine restaurant was allowing customers on the second floor. However, diners were asked not to post pictures or locations on social media.

Recently, netizens on WeChat and Douyin shared their speakeasy experiences in order to secure a dining table.

To enter restaurants, they must use excuses such as "looking for a friend inside" or "finding a place to rest" and show reservation information or even "codes," with doors closing immediately. They must sometimes dine in the dark with only a mobile phone light source or remain silent. 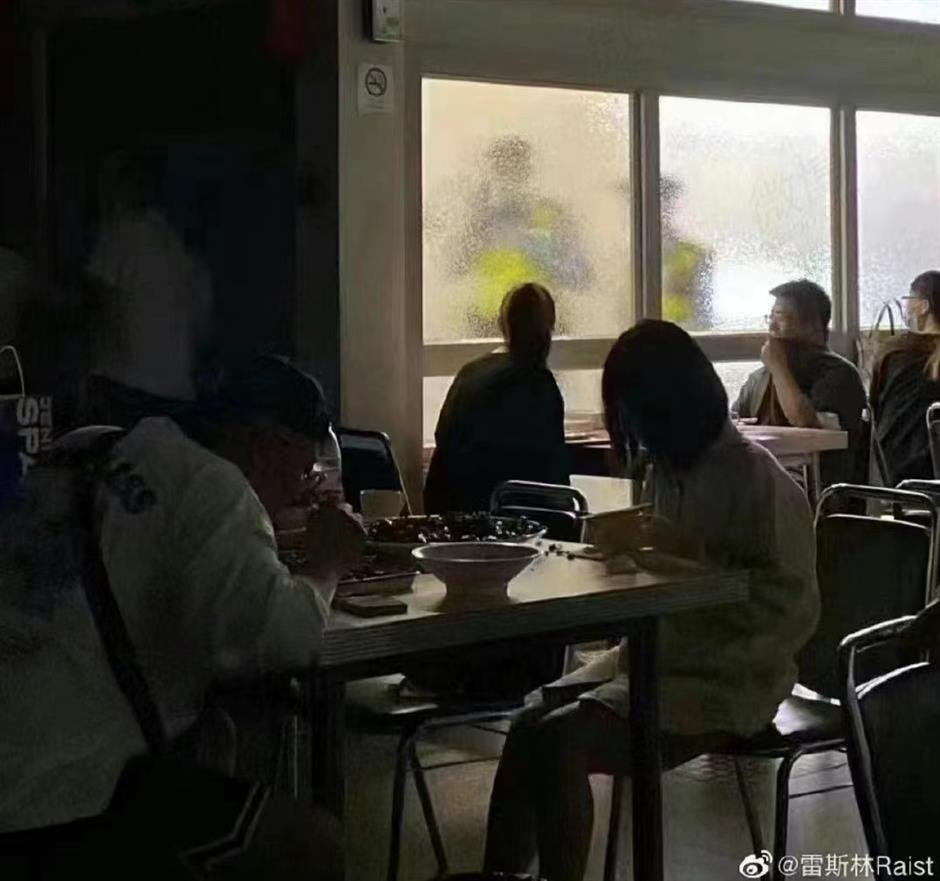 A Weibo posting shows a quiet, dimly lit sit-in restaurant with uniformed inspectors in the background.

Posts and videos on social media say that they should be ready to leave through the back door in case they are checked without warning.

The majority of speakeasy-style restaurants are located in independent buildings, rather than in shopping malls with strict inspection requirements. They usually have separate private rooms for dining.

Sounds strange and amusing? However, the catering industry has sufficient reasons to act in this way to overcome the "desperate situation." 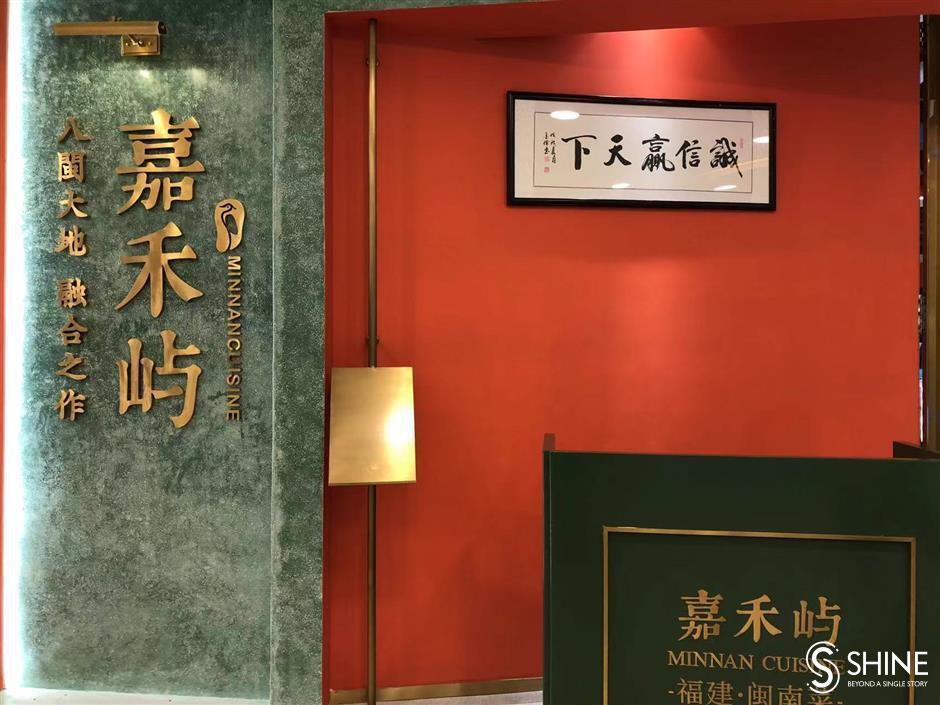 Lin Ruojian, founder of Jia He Yu, a Fujian cuisine brand, and his 100 employees are still staying in dormitories and waiting for the dine-in services to reopen.

"We survived in 2020, but now I can't do anything but wait," said Lin, a young Xiamen native who began his career in Shanghai with three restaurants, one of which was in the central Dapu Bridge region.

Since March, his company has lost approximately 600,000 yuan (US$92,307) per month in terms of dormitory rent, labor and food materials. In June, he tried to work out a takeaway business but failed.

It added new costs, such as rising food and delivery costs and high commission fees for takeaway platforms, with "very limited orders" every day.

Lin said that the fresh seafood, such as a Xiamen-style oyster, which was a popular dish in the restaurant, was not suitable for takeaway.

Another restaurant owner who identified himself as Tiger said he was concerned about missing the best time for eel gourmet as well as paying property rent and public utility bills. Last year, he spent about 2 million yuan on decorations for his second restaurant in Shanghai.

Several cafes and canteens in the surrounding community have been relocated or closed because they could not afford the rent and other costs, Tiger said.

Tiger, who has worked in Japan, has been testing water for the takeaway business since June. But he didn't get any orders during peak dining hours as he sat and talked to Shanghai Daily for an hour.

"During the summer, eel is in big demand," he said. "Nothing beats the taste of freshly grilled eel."

Posts on social media say that dozens of high-end restaurants serving Chinese, Japanese, French and Mediterranean food are in "a desperate situation" and fighting to stay open.

Most of them do not offer takeaway services or only serve food suitable for dining-in, such as sushi, seafood and barbecues, and place a high value on freshness and temperature control.

In the posts, they have called for the opening of dine-in services with limited dining, such as four or six people per table, and maintaining a table distance of at least 2 meters. It also hopes to receive help with rent reduction.

Shanghai government has established a package of measures for pandemic-affected industries such as catering and tourism, including rent, tax, social security and special loans. In addition, the government intends to deploy over 6,000 personnel in June and July to assist small businesses.

Lin welcomed the news because he did not know how or where to apply for government assistance.

Incentive coupons will be distributed to residents in an effort to stimulate the economy when the pandemic is eventually brought under control. 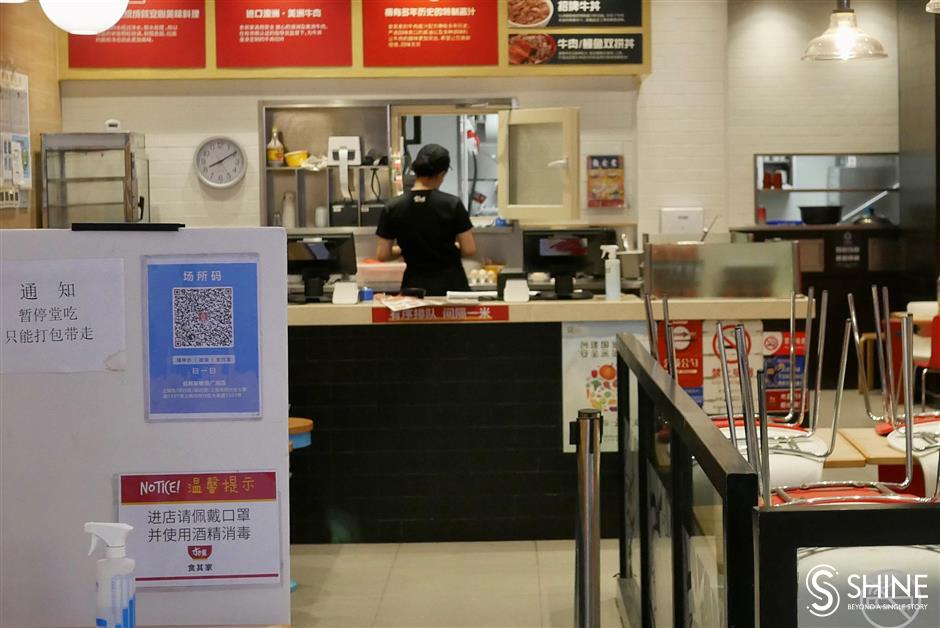 You can scan and eat, but you cannot eat inside.

People have also been known to pick up food and find places to eat outside. The West Bund riverside region has transformed itself into a natural "picnic" site. People, usually in groups of two to six, bring burgers, fried chicken, fruits and drinks and enjoy the Huangpu River view while having their meals.

Some time-honored food brands and restaurants, such as Oriental House, or Zuidong, are continuing with takeaway services.

They admit that takeaway revenue is limited, but it's a new channel for keeping in touch with customers and spreading brand ideas.

But it hasn't helped much. The majority of Shanghai residents have learned to cook by themselves during the over two-month-long lockdown.

"A lamb barbecue store and several hotpot restaurants are on my wish list," Cookie said. "Aside from food, the best dining experience is to chat and share feelings with friends." 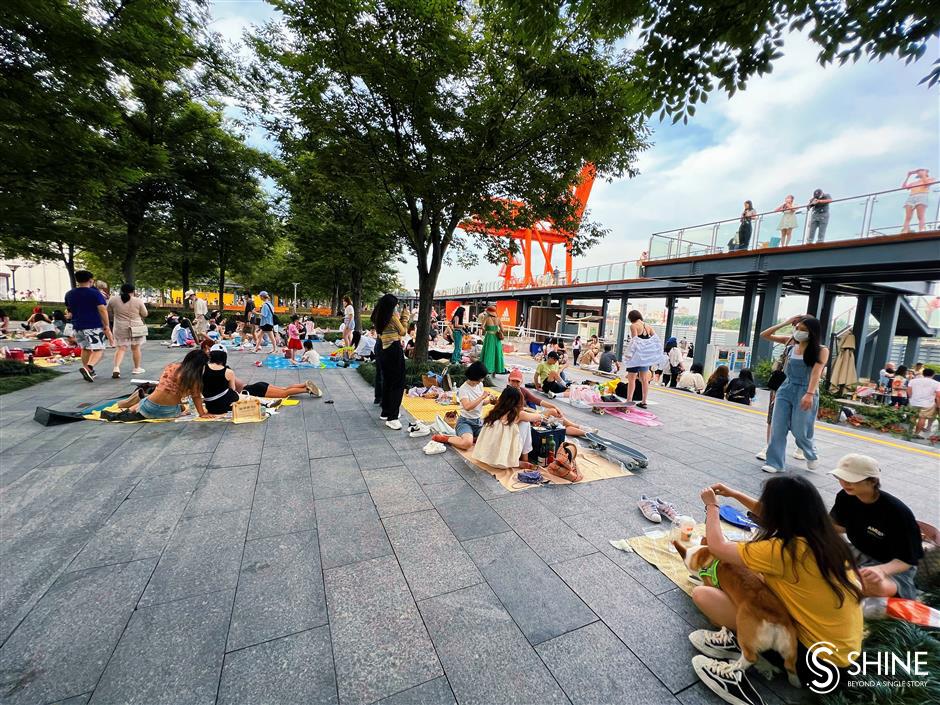 People having picnics on the West Bund riverside.

Tips for dining outside in Shanghai right now:

1. It is strongly advised to make a reservation. Walk-ins are unlikely to be accepted.

2. Although outdoor dining is limited, it is still available in some places.

3. Look for barbecue or clayfish spots in small streets late at night.

5. Go on a picnic with your own food but don't forget to take away the trash before you leave.

6. Keep an eye out for official pandemic information updates.

7. Avoid the middle and high-risk zones.