Lockdown leaves a blind spot in the income of many masseurs 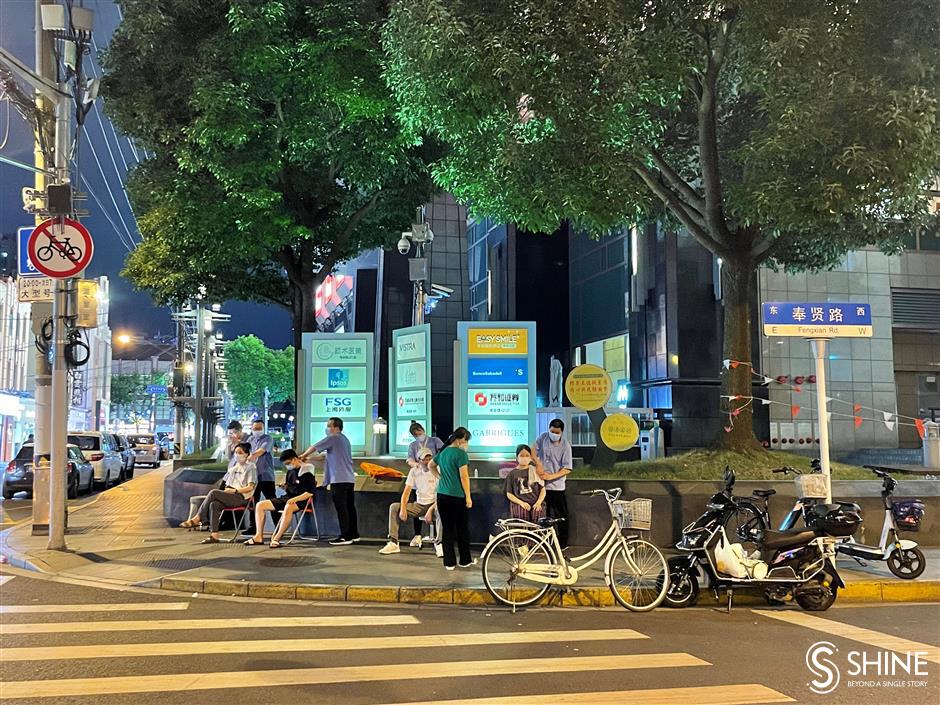 Masseurs attend to clients at a roadside corner in downtown Shanghai's Jing'an District.

As dusk falls, masseur Huang Fujian and his workmates link arms and make their way to the intersection of Fengxian and Nanhui roads, only a few minutes' walk away from their massage parlor.

They walk briskly down narrow alleyways, and from outward appearances, it would be difficult to believe they are blind or otherwise visually impaired.

With folding chairs placed in a line against a tall flowerbed and disinfectant sprayed all around, their pop-up, open-air massage parlor is ready for business.

"Business was slack today," Huang told Shanghai Daily while waiting for customers last Thursday night. "We were busy in the previous days; there was even a queue for massages."

That night, however, it was a full 15 minutes before the first customer came. 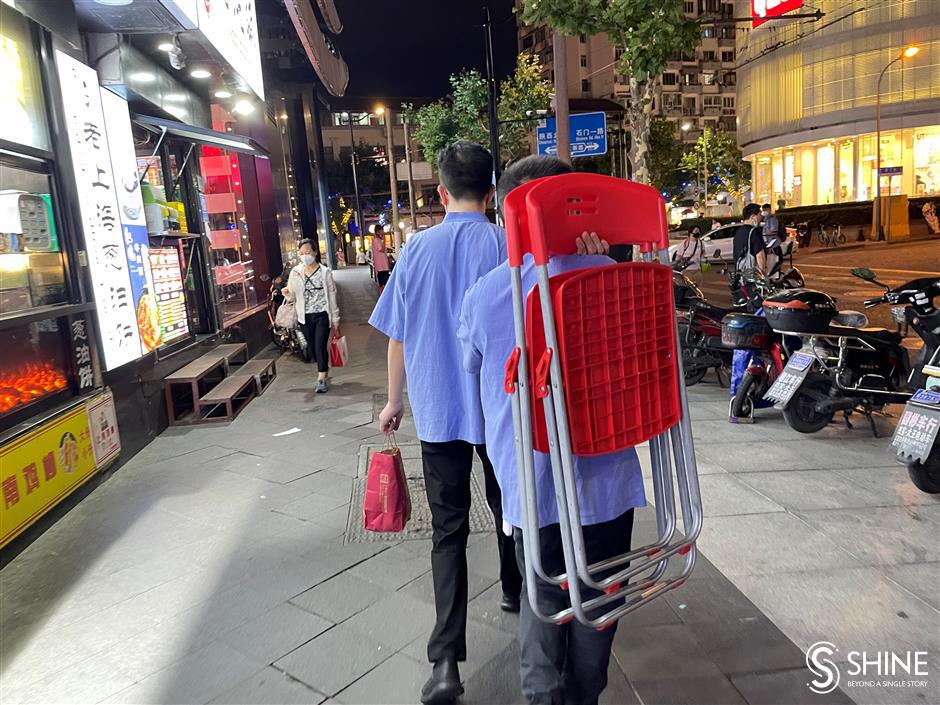 Masseur Huang Fujian and his colleague hold hands as they walk.

"I live nearby and I always come here for a walk after dinner," the retiree explained. "I saw them on the street once and tried a massage. It felt good. They are quite professional."

His favorite of the group is Tang Hui, who has since given him massages three or four times.

"I enjoy giving customers massage in the open air," she said, noting that it also provides free advertising for the service.

Like so many businesses in Shanghai, the masseurs are trying to recoup losses after the city's two-month lockdown.

It's no secret that the recent resurgence of coronavirus left many businesses at a standstill. Shanghai's industrial output nosedived by 61.5 percent in April from a year earlier, the sharpest slump in more than a decade. Retail sales posted a decline of 48.3 percent.

Though the city has broadly reopened since June 1, many businesses are still struggling to regain their footing. Huang and his colleagues work at the Ganzhi Blind Massage parlor. 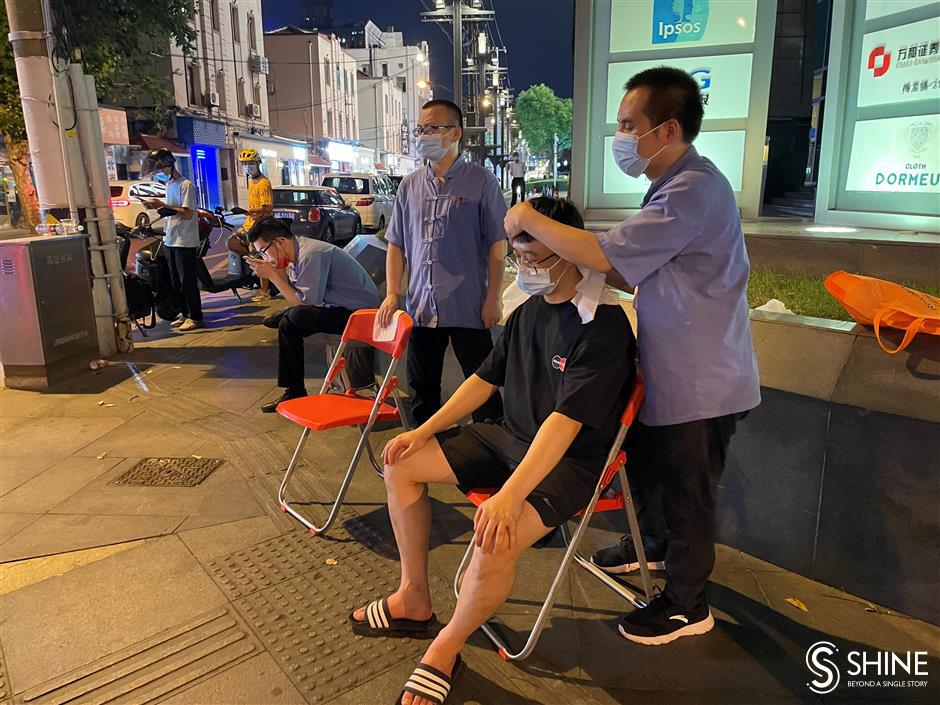 Huang gives a massage to a customer.

Blind massage is popular in China, amid a belief that the loss of eye sight endows masseurs with heightened other senses.

Ganzhi, one of Shanghai's most reputable blind massage parlors, has been in operation for nearly 20 years. It has 27 addresses listed on Dazhong Dianping, China's version of Yelp.

Despite that sprawling network, the business has been overwhelmed by financial pressures and personnel loss, according to Chen Liang, manager of Huang's parlor.

The outlet closed on March 17 and reopened early this month. It formerly employed 32 masseurs, 26 of whom had partial sight or were completely blind. Most of them were migrant workers like Huang and Tang. But since the city allowed out-of-towners to leave in late April, 20 have returned to their hometowns, Chen said.

"They never made it back," he said, noting that his working staff has been whittled to only 12 working masseurs.

"We used to be open from 10:30am to 11pm, but we've had to pare operations by three hours," Chen explained. "The lockdown has had a huge impact on brick-and-mortar businesses." 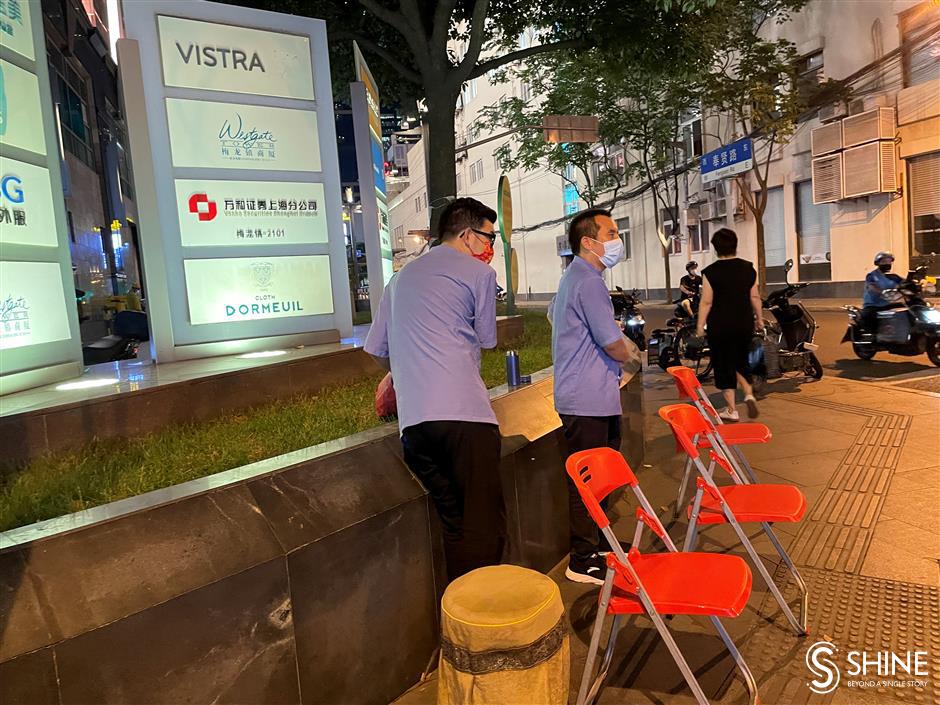 His massage parlor is tucked away in office buildings around Nanjing Road W. According to Chen, it used to service about 100 customers a day, especially busy during the lunch break period. That daily number has dropped to only about 30 to 40. Many people remain wary about any close personal contact, he explained.

Trying to keep afloat, the parlor has turned to streetside services.

"We allow our masseurs to provide massages on the streetside after we close every night," Chen said. "All of the income goes straight into their own pockets. They charge half our normal rates."

So far, the strategy seems to be working. According to Huang, he now gives massages to about three to four customers a day at the store, and another three to four on the roadside. He admitted it makes for an exhausting day.

"It hasn't been easy for them," Gu said of masseurs, who earned nothing during lockdown.

Accommodation costs, however, are not one of their worries. Chen said the massage parlor provides free dorm facilities. Local people have also pitched in to help.

"We spent just 400 yuan on food during lockdown," Tang said. "The local neighborhood committee, our neighbors, the disabled foundation and other warm-hearted people have provided us meat, vegetables and rice." 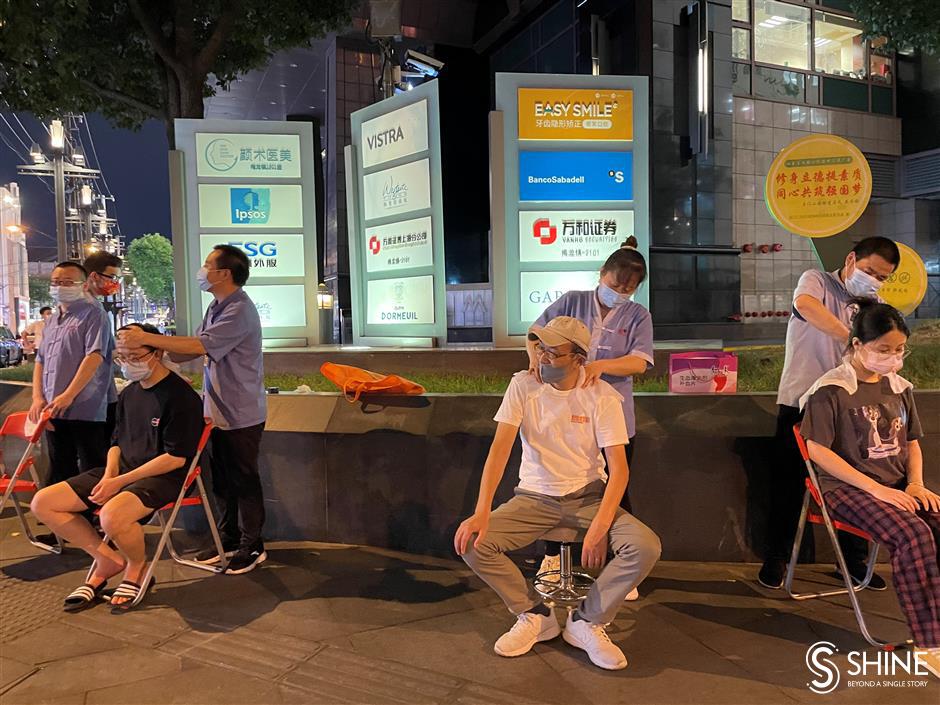 "I haven't sent money to my parents for about two months," said Huang, who hasn't decided whether to stay or return to his hometown in southern China's Guangxi Zhuang Autonomous Region.

Huang, 36, came to Shanghai about a year ago after a friend told him about the city's prosperity. He had been working in massage for more than a decade at home, but moving to Shanghai was a whole new experience for him.

"I miss my family so much," he said. "I'm so eager to reunite with them, but I'm afraid of taking the virus back with me."

He reckons he will stay in Shanghai for at least another two to three months, when he thinks the current pandemic situation will have finally ended.

Fellow masseuse Tang is also a migrant worker. The 45-year-old, who has partial sight, came to Shanghai in March from Xi'an, capital of north China's Shaanxi Province. Just a week after her arrival, the massage parlor was forced to close due to the lockdown.

"I had thought it would be over quickly," she said, "but that turned out not to be the case."

But Tang is resolved to stay and carve a career for herself in Shanghai.

"Back in my hometown, I earned about 6,000 yuan a month. My husband works for chicken feed," she said. "It wasn't enough to support my child and parents, so I came to Shanghai to make more money."

According to Chen, his masseurs were once earning nearly 10,000 yuan per month. Hitting that level again isn't likely in the near term, he said. 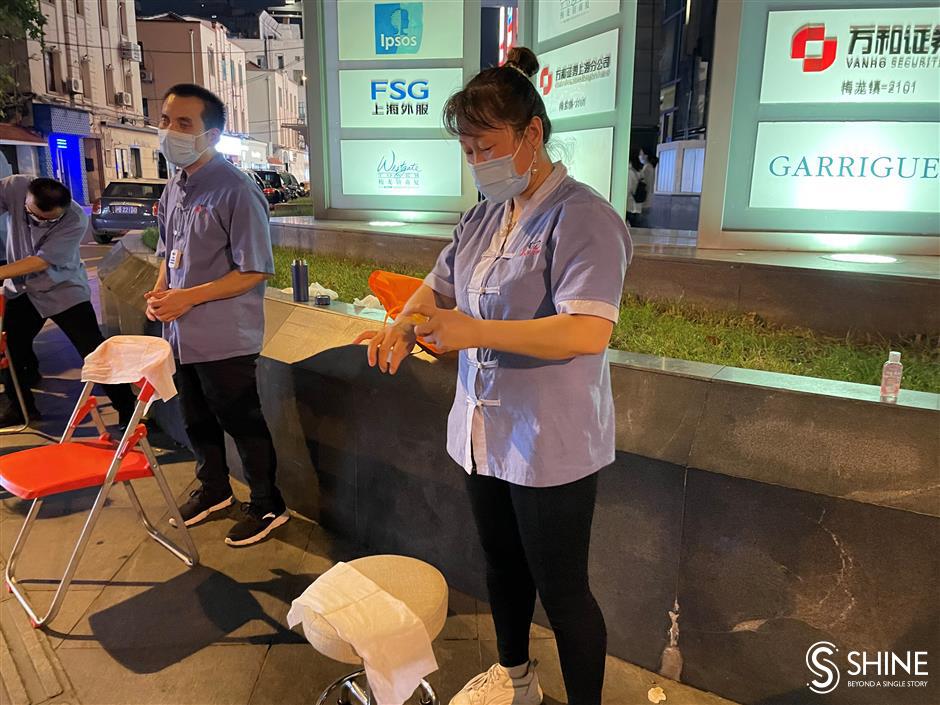 Tang Hui disinfects her hands after a massage.

The massage parlor strictly follows all coronavirus prevention and control measures. Staff take nucleic acid tests every 24 hours, and massage rooms are disinfected regularly. Chairs and towels used at the streetside business are disinfected after each use.

Chen admitted the open-air massage parlor is operating in a "gray area." The store doesn't have license to do business on the street.

"Yes, police often come to shoo us away, saying it's a violation of urban environment regulations," he said. "So, we change venues frequently."

Customer Gu is of two minds about the situation.

"Police are understandably tasked with curbing such operations amid the risk of coronavirus," he said. "But authorities also should be responsible for helping the underprivileged when they are in such need."

Chen said he is hopeful that authorities may relent and give blind masseurs the right to provide streetside services.