No artificial life support, I want to die in peace and dignity 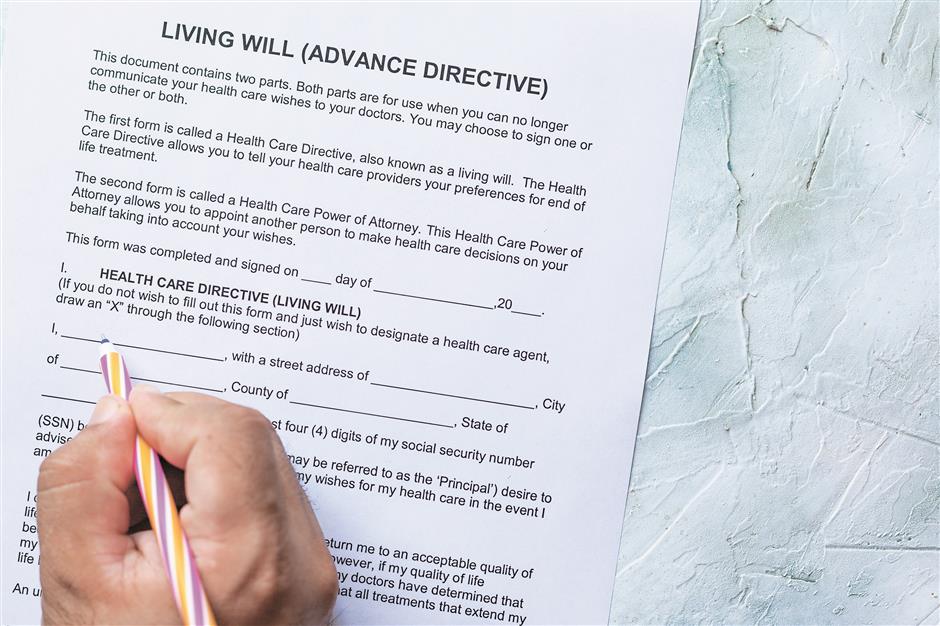 A southern city has become the first jurisdiction in China to enact legislation allowing a terminally ill patient to refuse "excessive life-saving treatment" and die with dignity and comfort.

The new law in Shenzhen in Guangdong Province, which comes into effect next January 1, follows a practice common in many countries, where those with incurable conditions and nearing the end of their lives have the right to decide how they die.

According to a revised draft of the city's medical treatment regulation, which was passed last month, patients with terminal diseases or at the end of their lives can create advanced care directives, or living wills, that reject artificial life-support treatment such as tube feeding or cardiopulmonary resuscitation to prolong life.

Right to die legislation in other countries has provoked public debate about the ethics of ending life by choice. China is no exception. The new Shenzhen law has stirred heated national discussion on social media.

I'm supportive because it respects one's own will, which is a great legal improvement. But, of course, we should also pay attention to the design of the process to avoid loopholes in implementation that might be taken advantage of improperly.

"Let people live with freedom and die with dignity," posted one netizen, whose comments received about 1,100 positive responses. "For a patient who's been in great pain, the new regulation would make him or her suffer less in their last days."

"I'm supportive because it respects one's own will, which is a great legal improvement," another Weibo user wrote in a comment. "But, of course, we should also pay attention to the design of the process to avoid loopholes in implementation that might be taken advantage of improperly."

Others, too, have expressed concerns that living wills might be abused by medical staff or families who don't agree with such directives. The wills must be signed by two witnesses.

At the heart of a debate is how to judge whether a patient is at the final stages of life.

The newly passed regulation requires a document signed while a person is still conscious and in full mental faculties. The document must specify what the patient wants in terms of life support when nearing the end of life.

Shenzhen created the Living Will Promotion Association in March last year. It provides a channel for people to create living wills in the form of written documents, videos or audio recordings, and can also include directives to families.

The new rule could relieve the mental anguish of both family members and medical staff.

The Chinese tradition of treasuring life and filial obligations often results in children agreeing to every possible treatment for parents, even when death is inevitable.

Medical workers, too, often find themselves in uncomfortable positions.

"The advanced care directive lets a doctor act according to the wishes of the patient who doesn't want to be kept on life support and just wants to die in peace," said Liang Zhen, deputy director of Shenzhen People's Hospital. "It protects the rights and interests of the patient and helps avoid medical disputes."

A professional evaluation of both the physical and mental conditions of a patient must be carried out before an advanced care directive comes into force.

"The patient's independent determination is the most important thing," Liang said. "We need to ensure that the patient is not being forced or unduly influenced."

Involving family in the decision is important, said Wang Yue, professor of the Department of Medical Ethics and Law at the School of Health Humanities of Peking University.

"It would be better to reach a cognitive consensus on the advanced care directive with relatives through family meetings," he said. "The whole process should be video recorded to avoid possible disputes in the future. By having meetings, it respects the patient but also the family members."

Although right to die directives are sometimes called "voluntary euthanasia" in the West, Chinese authorities said that term is improper here. Euthanasia, where terminally patients have the right to subjectively end their own lives at a time of their choosing, is illegal in China – as it is in most countries.

Right to die practices have been around in China for some time, though not enshrined in law.

Celebrated Shanghai comic strip artist He Youzhi, who died in 2016 at age 94, often joked he "wished to be slow to age and quick to die."

His wife Xie Huijian, recalling conversations with her husband, refused a medical treatment to cut open his esophagus in the last days of his life.

"I said no because he always told me, when he was conscious and mentally aware, not to save him if death was inevitable," she said. "I wanted him to leave this world in comfort."

The living will is the oldest form of advance care directive. It was first proposed in the US in 1967. A Gallup poll in 2020 found that 45 percent of Americans had made living wills, up from 40 percent in 2005. Such directives were most common among people with higher educations and higher incomes.