Good riddance to life within a 'snail's shell' 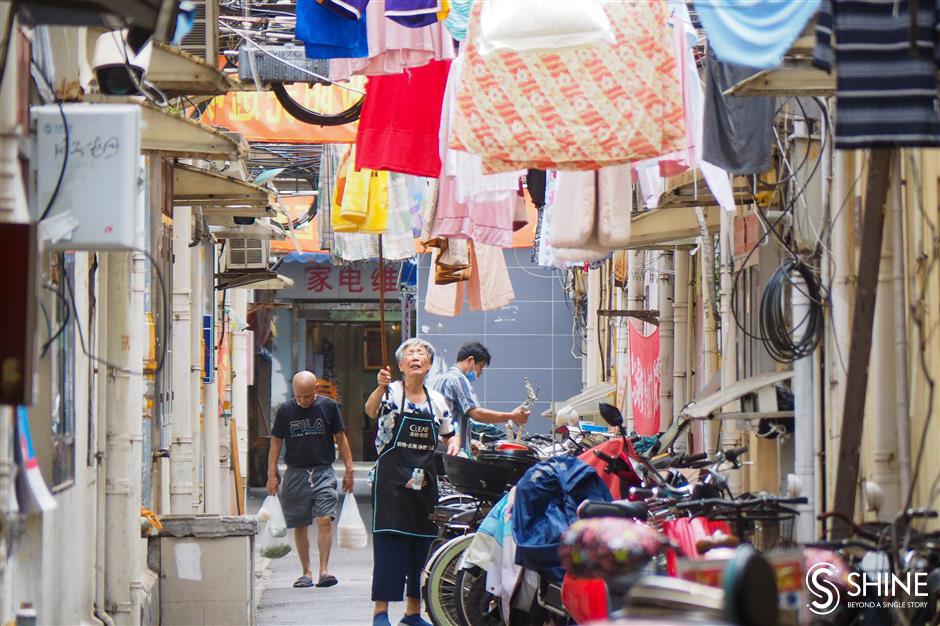 For Zheng Zhongxian, life feels like riding a roller-coaster this year. After enduring a two-month lockdown in one of Shanghai's last remaining derelict neighborhoods, Zheng, 84, was informed relocation of the area had finally started.

The dilapidated, lane-style compound on Jianguo Road E. in Huangpu District, only two blocks away from the Xintiandi commercial hub, became one of the hardest-hit areas during the city's COVID-19 resurgence that began in March.

New infections kept popping up within the neighborhood, which was later fenced in to prevent further transmissions. Zheng said being confined in the shabby house, with a shared bathroom and kitchen, was really difficult during the lockdown.

"After the relocation was initiated, I've never seen my neighbors happier in the last seven decades," Zheng said. "We caught the last bus for the city's relocation campaign."

This relocation project was a sign of the city's successful three-decade-plus campaign to improve residents' living conditions.

Shanghai housing officials finished renovating every large derelict neighborhood in the city at the end of July. For the past 30 years, more than 30 million square meters of dilapidated houses have been renovated or demolished, benefiting about 1.3 million local families.

Zheng recalled how nine family members once lived together in the 20-square-meter ground floor apartment, which barely gets any sunlight. The apartment was divided into several smaller quarters and a loft to offer very limited privacy to family members.

He often stepped on someone sleeping on the floor when he went to the public bathroom at night, so he later installed a toilet near the dining table after all the other family members either moved out or died.

Bathing was another problem. On summer nights, he bathed in the communal kitchen, but it was brutal to do so in winter.

"My dream is to have a home with a private toilet and bathroom," Zhang said.

With relocation compensation from the government, he plans to buy a 40-square-meter apartment in an old community in Changning District, where his dream will finally come true. 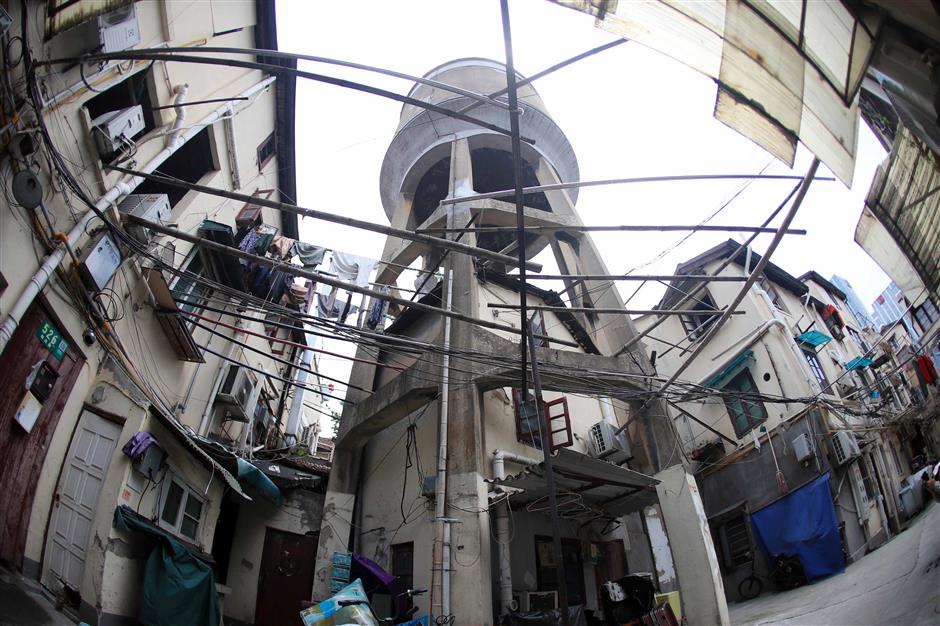 Zheng's apartment is beside an abandoned water tower that blocks the sun.

In the 1980s, most Shanghai residents lived in cramped quarters provided by employers. Life was described as "rites within a snail's shell," an expression paying tribute to how Shanghai residents could perform the most complicated operations in tiny spaces.

The average per-capita living space was 4.5 square meters, among the lowest in China. That figure today reaches just shy of 30 square meters, thanks to a series of housing-policy reforms that led to the massive resettlement campaign driven by urban redevelopment.

In the late 1980s and early 1990s, one-quarter of local residents used public corridors as kitchens, more than half used chamber pots and 40 percent used coal stoves for cooking, according to official statistics.

In 1992, a Hong Kong-based developer became the first to complete a relocation project in Huangpu District, marking the beginning of the city's jiugai, or "renovation on old houses."

Jiugai has since become the primary means to improve living conditions, remove shantytowns and redevelop the region to help spur the city's economic growth.

Residents can choose to relocate to designated housing on the outskirts of the city or purchase their own property with subsidies from the government.

Many former neighborhoods have become upscale landmarks, such as Xintiandi in Huangpu, which was renovated from a shikumen, or stone-gate, compound named Taipingqiao, or Peace Bridge, in 1996.

A riverside shantytown along Suzhou Creek in Putuo District, formerly known as liangwan yizhai, or "two bays and a residence," has been replaced by Brilliant City, a high-end commercial residential community that houses about 30,000 residents. 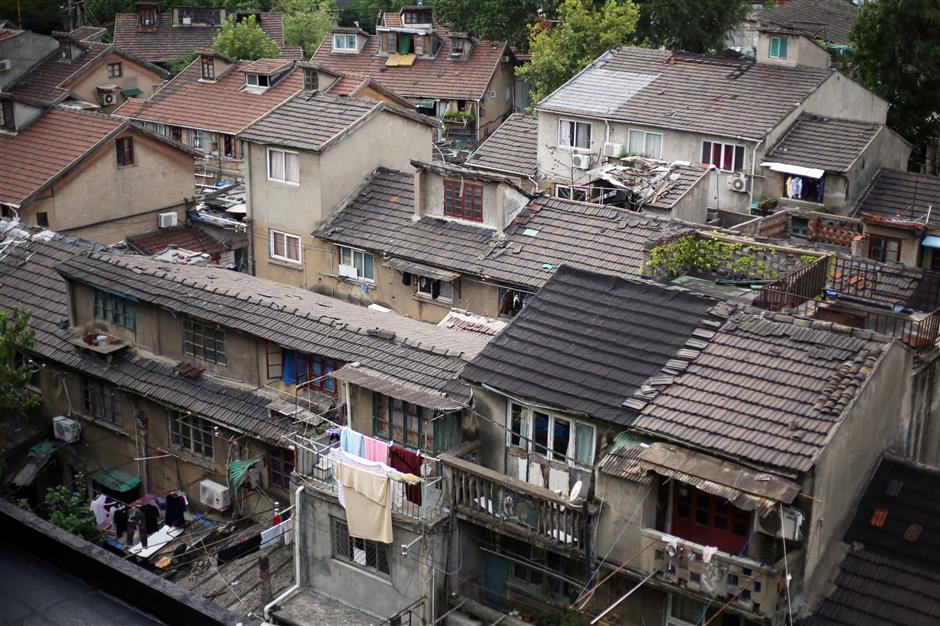 A file photo of Hongzhen Old Street before the relocation campaign

Guo Ruirong, a former resident of Zhangqiao Road in Hongzhen Old Street area, said she very likely would have gotten COVID-19 had she not relocated five years ago.

The apartment would flood whenever it rained heavily, and the wooden chairs and stools would float, recalled Guo, 65.

"The virus would be inevitable under such living conditions," she said. "The jiugai campaign is like a life saver for me."

In 2017, her family was relocated to a new apartment with two bedrooms and two sitting rooms at Rainbow Bay, known as the largest downtown residential complex in Hongkou primarily for relocated residents.

Guo and her husband have visited many places across China since moving into their new apartment, which was impossible in the past because they always had to stay at home in case there was a rainstorm.

She sometimes revisits the Hongzhen area where she lived for three decades. Guo married her husband in 1982 and moved to their small, self-built apartment when she was 25.

"I barely recognize the place now," she said.

In the 1930s, the area was an idyllic watertown with farmland, villages and stores as well as dairy and silk plants.

The situation changed after an influx of refugees, mainly from neighboring Jiangsu Province, who lost their land during the Boxer and Taiping Rebellions in the late Qing Dynasty as well as the War of Resistance Against Japanese Aggression (1931-45), fled to the city and settled in straw houses on both sides of the street.

There were once more than 14,000 households in the shantytown, which is only 3 kilometers from the Bund.

Since the massive relocation campaign, the area has undergone a major transformation with residential high-rise buildings, upscale shopping malls, supermarkets, restaurants and schools.

The Hall of the Sun, one of Shanghai's largest commercial complexes, opened last year, reviving the once prosperous commercial atmosphere of the old street. 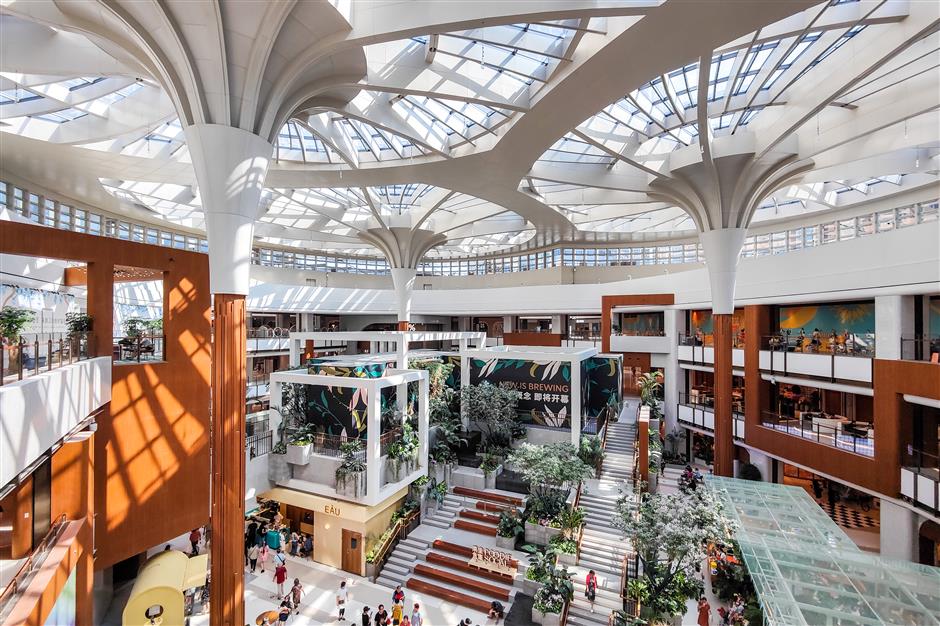 Since 2017, Shanghai has modified its renovation strategy from demolition to preservation, and many structures have been preserved to restore the city's traditional ambience.

The neighborhood along Jinling Road E., which includes the city's last remaining qilou, or arcade houses, is being preserved and redeveloped into offices, shops and homes as all the residents have moved out.

Qilou is a fusion of traditional Asian architecture and 18th-century Western veranda style mixed with Indian and Arabic influences. These types of houses are found primarily in southern and southwestern China.

Shanghai's most famous qilou cluster is on Jinling Road E., formerly known as Rue du Consulat. It was built by the French in the 1850s and home to the French consulate. Developers introduced the arcade house, similar to those in Paris, after the road was widened to accommodate modern vehicles.

In another project, around 170 historical buildings of various styles, such as shikumen and garden villas, have been retained in Jing'an District's Zhangyuan Garden area, a 46,000-square-meter residential compound, after residents were relocated. Under the blueprint, the buildings will be renovated and converted into boutique hotels, small guesthouses, art galleries, museums and other cultural venues.

Last year, Caoyang Community in Putuo District underwent a major renovation – the largest of its kind since the community was built in the 1950s to answer the call of former Shanghai Mayor Chen Yi to "serve the working class" – restoring the neighborhood's original look.

All 1,500 families living in Caoyang No. 1 Community, who were temporarily relocated during the renovation, have returned to their refurbished apartments replete with modern facilities. 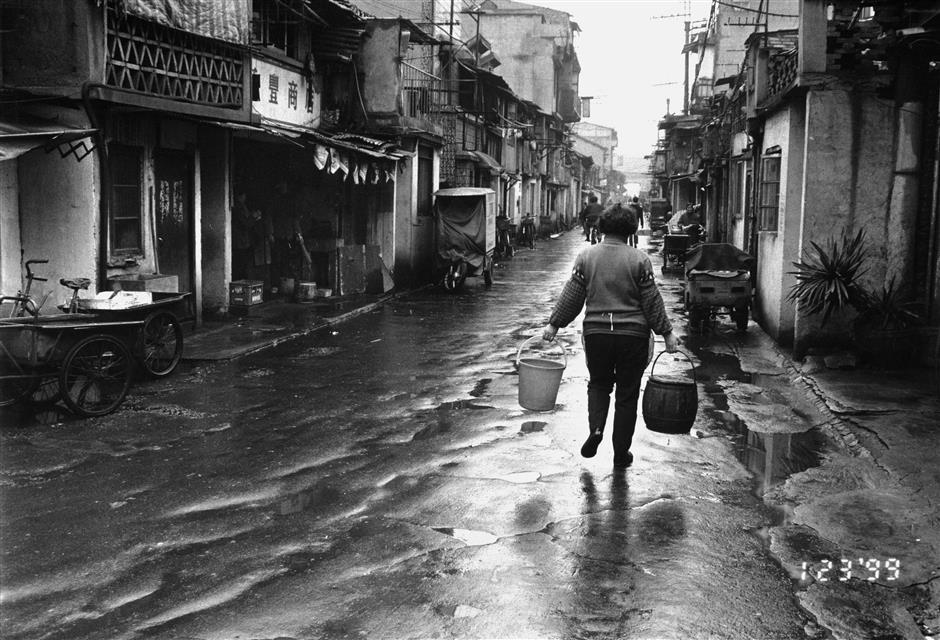 In this file photo, a resident carries a chamber pot in an old downtown community in Shanghai.

In the next phase, Shanghai will shift its focus to scattered derelict houses and remaining "urban villages."

About 15,000 local families still live in shabby houses where they share communal kitchens and toilets with their neighbors, said Yao Kai, director of the Shanghai Housing and Urban-Rural Development Commission.

Some of the houses will be renovated alongside new public facilities, such as seniors' homes and community service centers, while residents living in poorer conditions will be relocated, Yao said.

In addition, 54 communities with a large number of rustic houses are being renovated, which will benefit more than 30,000 families.

Most of the projects near Outer Ring Road and old towns will be redeveloped. 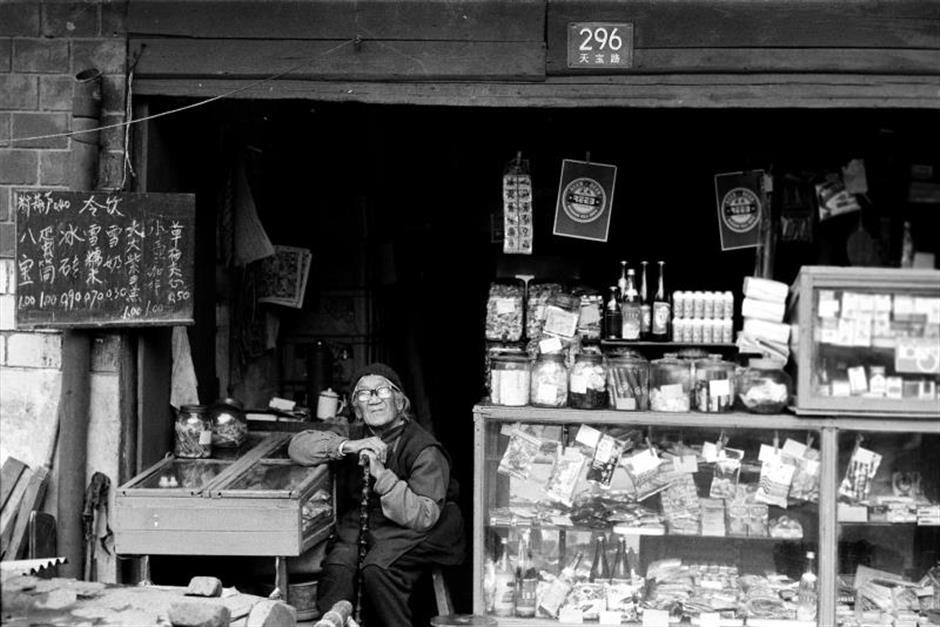 A cigarette store that was common in local lane-style neighborhoods