A walk in the clouds, but at what price?

A travel blogger recently paid for sedan-chair carrier service in the Wulong karst scenic area in Chongqing, sparking an online controversy. Some say it's shameful to pay others to do such a job.

Sedan-chairs are an old tradition in mountain areas of China and around the world. The chairs in China are usually made of long bamboo tied up as a stretcher and fixed with a chair in between.

Carrying the chair with the customer in up a mountain needs a lot of strength.

Having observed the carries for quite some time, the blogger finally asked two carries to carry him up the mountain.

The carriers in the scenic area have to wear a standard blue carrier vest. One of them with gray hair and burly arms told the blogger while they stopped to catch their breath that he needed to save money as his son is about to graduate from college.

Having said that, there's a hint of pride flashed across his face as he wiped sweat with his hand.

Seeing how swift the carriers walked up and down stairs, the blogger wanted to try lifting the chair as they do. His shoulder got pretty sore after just walking a few steps. 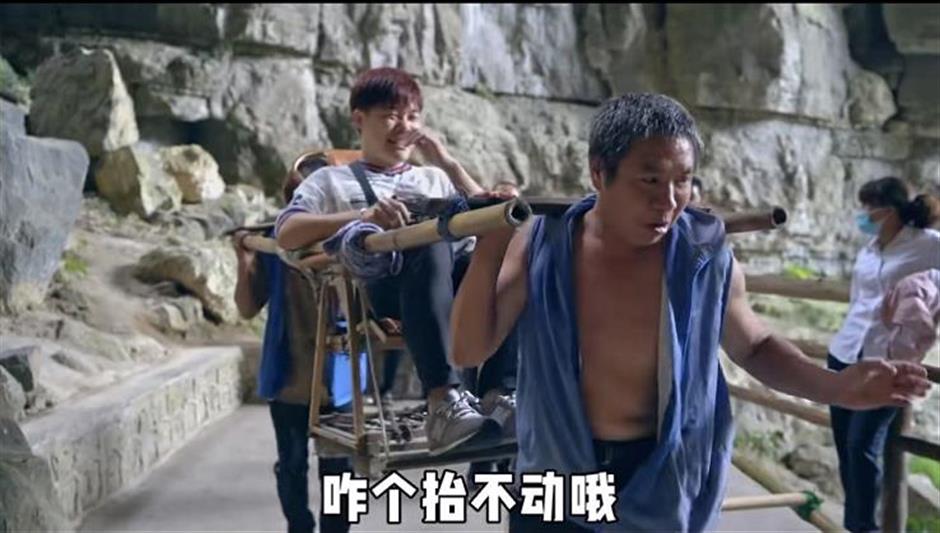 A staff member with the scenic area said they have seen an increasing number of young people choosing to pay for carriers.

One such carrier from the Sanqing Mountain in Jiangxi Province said that he has been in the business for 16 years and it enabled him to keep his family fed. There is nothing shameful in that.

The blogger learned from the porters who carried him up the mountain that many young people wouldn't use their service out of concerns for safety.

Some of them do feel a little bit embarrassed if they were to be carried up a mountain by two middle-aged men instead of climbing themselves. People might judge them. 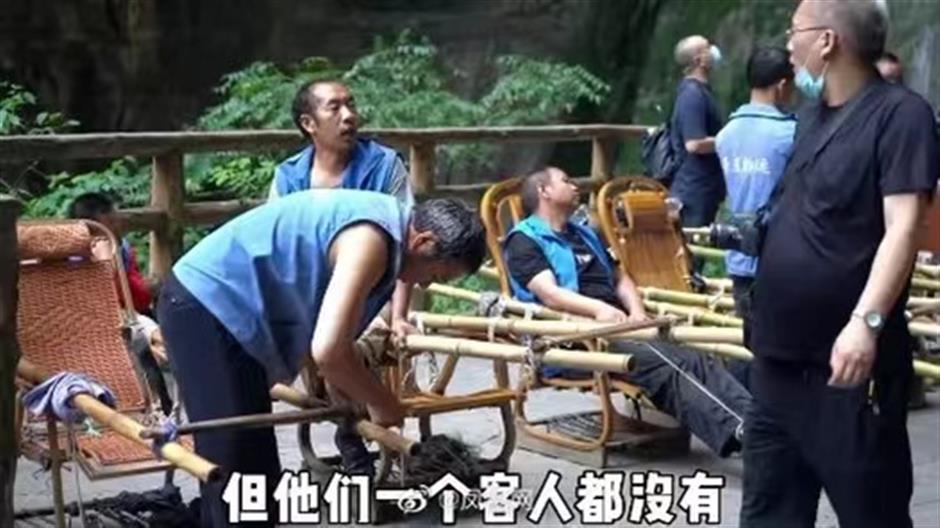 A screenshot from the blogger's video shows the carriers wait for business.

The Sanqiao scenic area in Chongqing has a screening and management standard for all its porters.

It only recruits nearby farming residents who are in good health. It's another job option for the local farmers.

According to the scenic spot, a one-way trip costs no more than 400 yuan (US$58), and the final price depends on the tourist's weight and it's finally decided by the carriers themselves.

It would take an average adult one hour and a half to walk up the scenic area. The carriers mainly provide service to the aged, children and tourists who are physically challenged or just under the weather.

Now there is an increasing number of young people who're willing to try the service out of kindness, the staff member said.

A Chongqing woman surnamed Wang said in an early interview that porters and sedan-chair carriers have long been a part of the city's memory as long as she can remember.

Although sedan-chair is a common existence across China since ancient times. This line of work is especially robust in Chongqing, for it is a city with lots of mountainous areas and alleyways, so it was necessary to carry people and cargo around.

At first, the sedan-chair carriers were hired by the gentry and they served sort of as their personal driver. Gradually, the carriers become a part of the city's alleyway hustle and bustle. They also served as mail and delivery men, sometimes they would carry local brides in palanquins to their weddings. 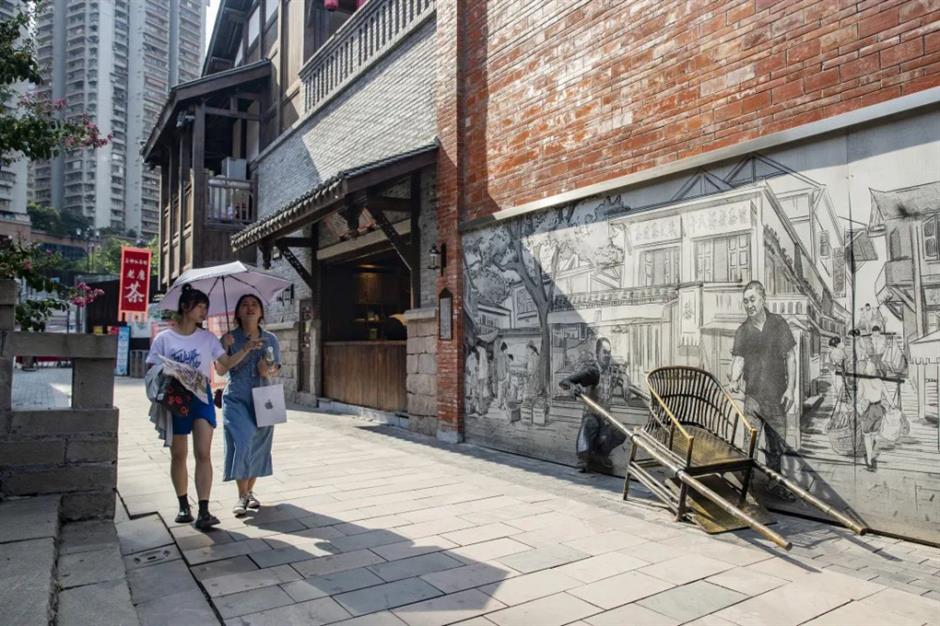 The long and physical work is really demanding nevertheless, so many porters and carriers create songs to keep themselves alert and cheer themselves up.

Some of the tunes have been listed as China's intangible cultural heritage. 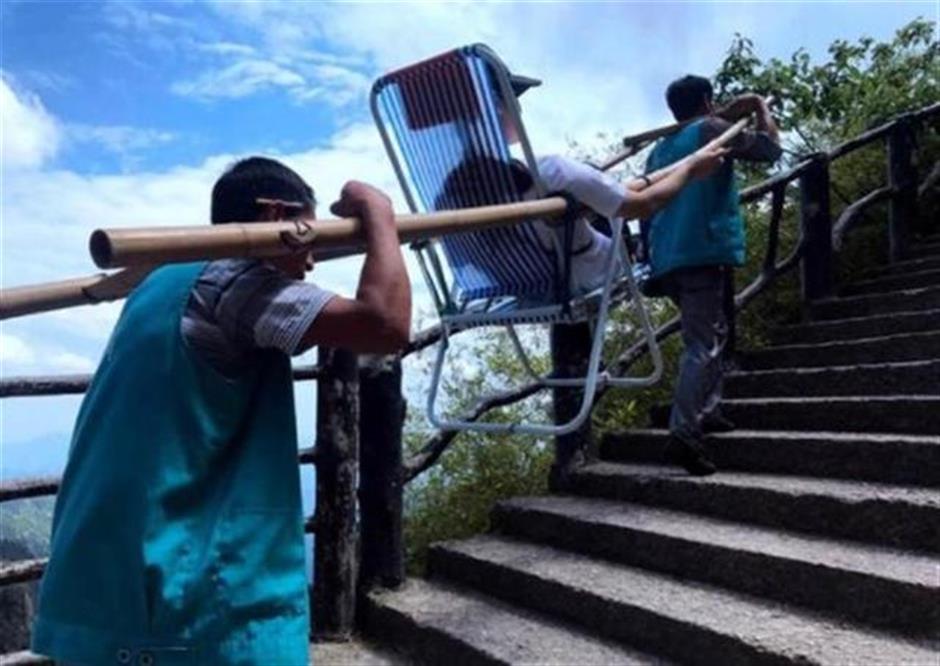 It is a tough job.

It's quite common to see sedan-chair carriers in China's mountain scenic sites. They have become an integral part of the system and still exist along with more modern transportation such as cable cars and ropeways.

Chen, a manager with the Sanqing Mountain scenic area, recalled the peak of the tourism boom was around 2000 and there were about 500 working sedan-chair carriers. In 2005, the scenic spot recruited all of the carriers and provided them with one to two training sessions every year.

To become a professional carrier, they need to be locals and in good health. Many local farmers choose to work as a porter to increase their income.

Now there are just a little over 100 carriers working at the scenic spot, and all of them are over 40. There are practically no young people who would choose this work.

It's unknown whether this porter service will survive after they retire, Chen worries.