The pandemic in Shanghai has unnerved independent musicians, especially those who rely on live performance and music industry workers.

Shanghai Daily sat down with a few musicians and people from the industry to understand how they were coping since the end of the lockdown.

"I had many performances lined up but they were canceled."

Bai Yu has released four albums of largely folk songs with observant and distant lyrics, but also reflect his philosophical and humanitarian thoughts, according to his bio posted on QQ Music. 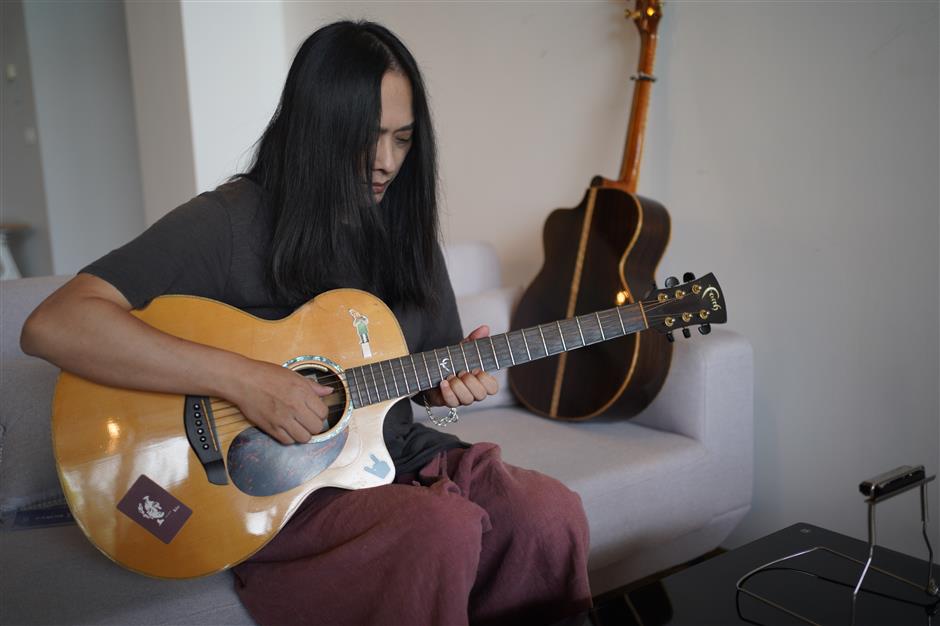 Bai before his performance at the 2022 Minhang Music Festival in August.

The independent singer-songwriter studied jazz guitar at the Shanghai Conservatory of Music. He moved to Beijing in 2000 to join a grunge band, living in a small basement room with only a bed and a table for furniture.

He kept himself busy reading books, mostly on philosophy, practicing with the band, and working on his second album. A friend, worried about his mental health, tried to talk him out of it.

"I felt like a falling leaf, clueless. That's a line from one of the songs. In retrospect, making indie music felt like fate," he recalled.

He went on a nationwide tour after completing 12 songs for his second album. A Shanghai native, Bai had trouble blending into Beijing's culture. He mostly played live in cafes, art galleries, and museums. He also taught guitar at Xiaoyinca, or Little Musician, in Shanghai, but the company ran into financial trouble and did not pay salaries for months.

Before the COVID-19 outbreak hit Shanghai, he had a series of gigs lined up. Things were looking up... "I was making experimental music, but we had to drop everything," he said.

Bai plays Truman's World, a song from his latest album that was inspired by the movie Truman's Show.

Bai tried online streaming during the citywide lockdown. He was conscious of the fact that the music he played couldn't compete with other streamers' short-video platforms. He barely made 4,000 yuan (US$577) in 3 months. Bai, who performed at the 2022 Minhang Music Festival, expressed the hope that the pandemic would end soon.

Indonesian drummer optimistic about an entertainment career in Shanghai

Joye Yeung, an Indonesian drummer who was born in Hong Kong, got his master's degree in percussion from the Shanghai Conservatory of Music in 2020.

He started playing bongos at age 6 and has loved them since. Joye, now 28, thinks Shanghai offers greater live music scope and entertainment business prospects than Hong Kong and Indonesia. 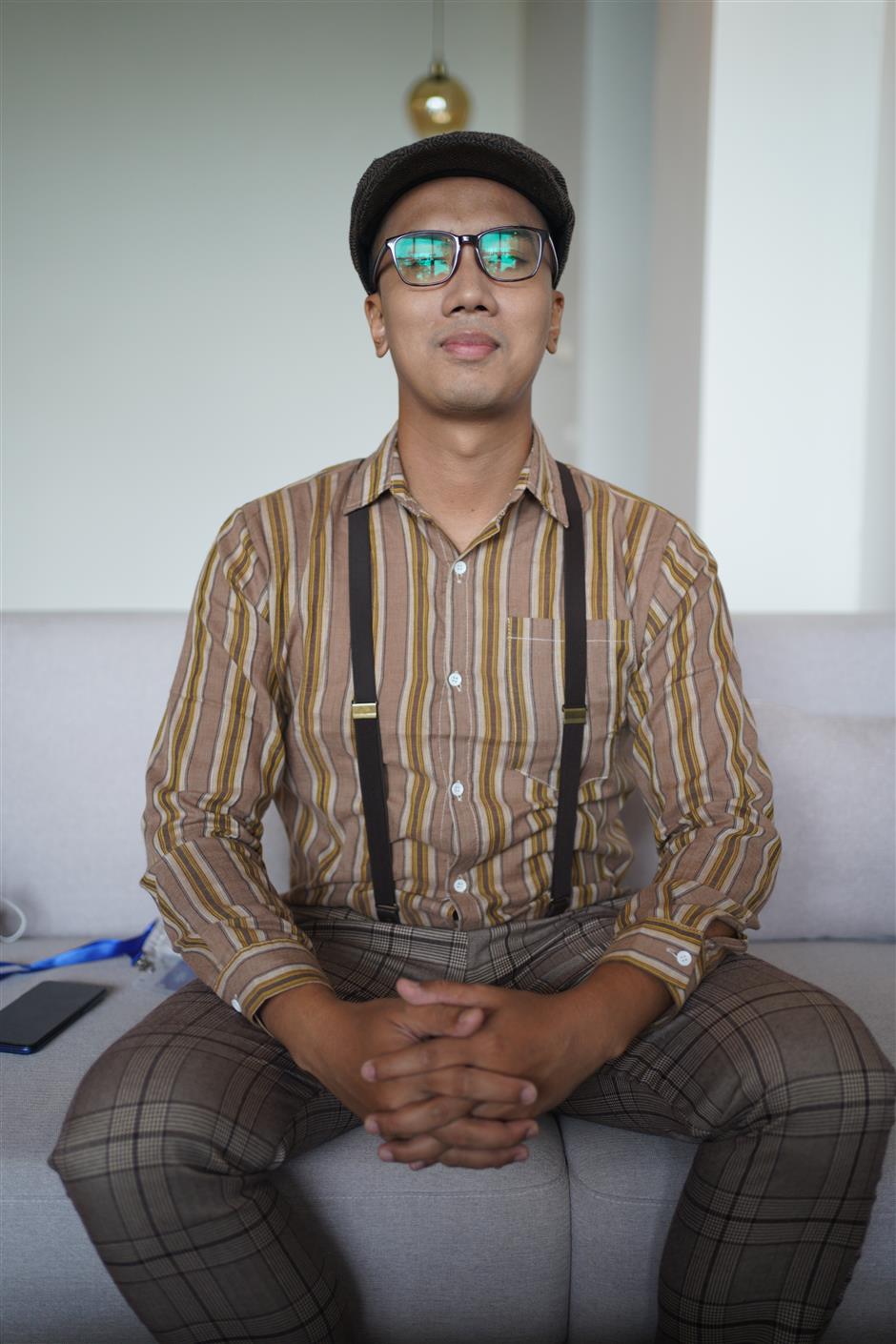 Yeung poses for a photo. 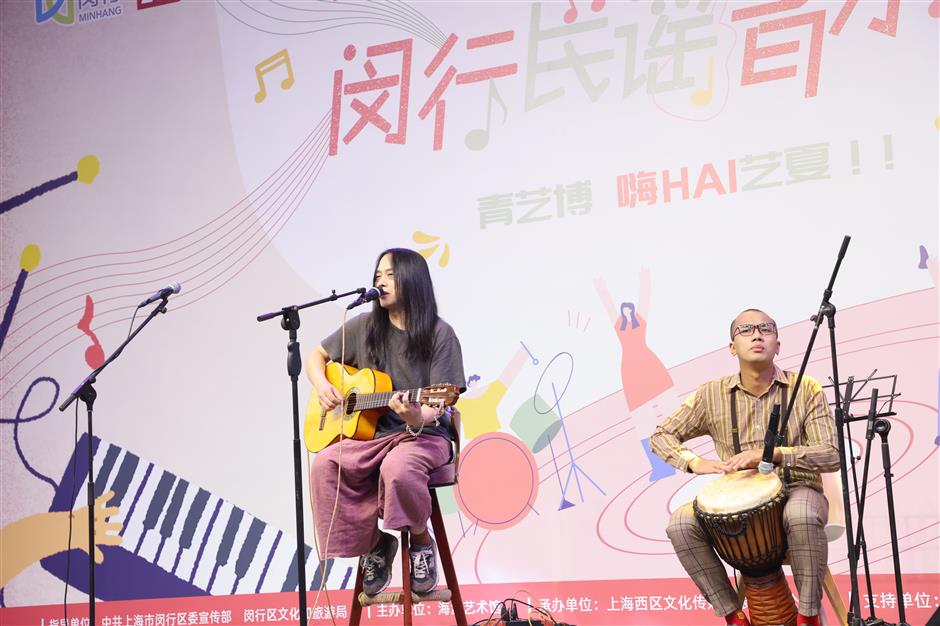 Yeung collaborates with Bai at the 2022 Minhang Music Festival.

In the beginning of 2022, Joye left his teaching job at a private institute in Qingpu District, where he taught kids to play the drums. He now performs full-time for various bands and live performances. He and a few American musicians have formed Tequila Boombox, a jazz-and-Latin fusion band. They are currently working on an album.

Tequila Boombox is like a ball of energy that swings, grooves, and rocks. It incorporates different styles into its music. When you arrive at the show, your feet begin to move, and your body follows. Anton Vittal, the band's guitarist, characterized their music as "before you know it, you're on the dance floor going crazy."

Tequila Boombox played at the House of Blues & Jazz near the Bund before the COVID-19 outbreak. 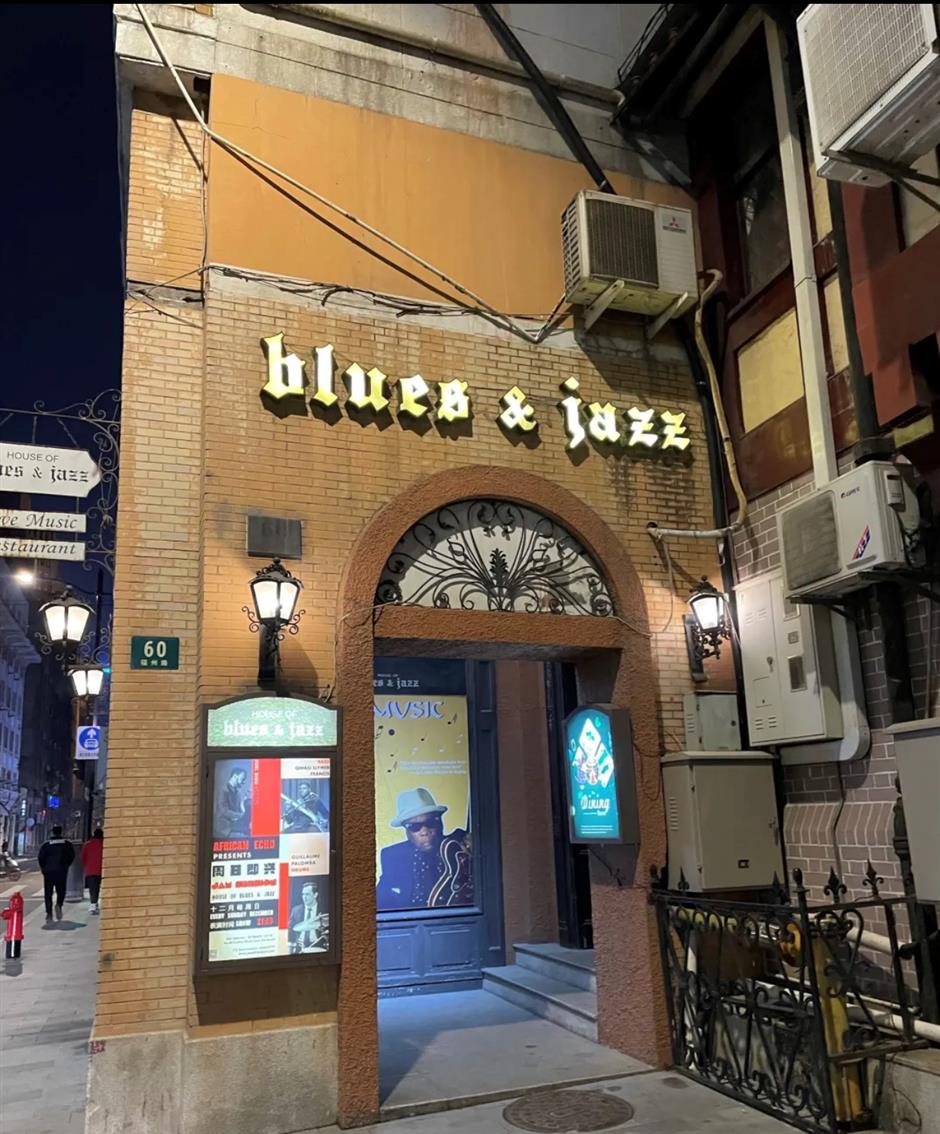 The House of Blues & Jazz at Fuzhou Road.

Because they play jazz and Latin, they've always had a stronger foreign audience than Chinese, Yeung said. He believes he has greatly improved by playing live for an audience.

Yeung enjoyed his time with the band at the House of Blues & Jazz.

To appeal to Chinese tastes, he discovered that fusing jazz with other music types such as Rock&Roll and Latin is always a good idea. Since Yeung and Bai became good friends, Yeung played percussion for his ballad songs.

Unlike his customary jazz and Latin styles, ballad songs necessitate focusing on simple drum beats that can portray the ballads' feelings rather than intricate rhythms. It's similar to cooking; all you need to produce good fried rice is a precise amount of salt and nothing else.

Looking ahead, Yeung hopes there will be no more lockdowns and that the government will allow more venues to open so that they can perform live again.

"Life is not always predictable, and there will be ups and downs. You will be OK as long as you believe in yourself, keep going, and don't give up on your dream," he said.

A guitar teacher moved to Hangzhou after the lockdown

Chen Jie, 31, has been teaching guitar for nearly a decade. Unlike other music majors, Chen Jie is passionate about the guitar and has been learning the instrument on his own since the age of 18.

Chen moved to Shanghai in 2015 from Xi'an, the capital city of northwest China's Shaanxi Province, in the hope that there would be more teaching opportunities in Shanghai.

Before the pandemic struck, he had more than 40 students. His classes at a local guitar shop were canceled and, left with no students or cash, he returned to his hometown in Hubei Province. 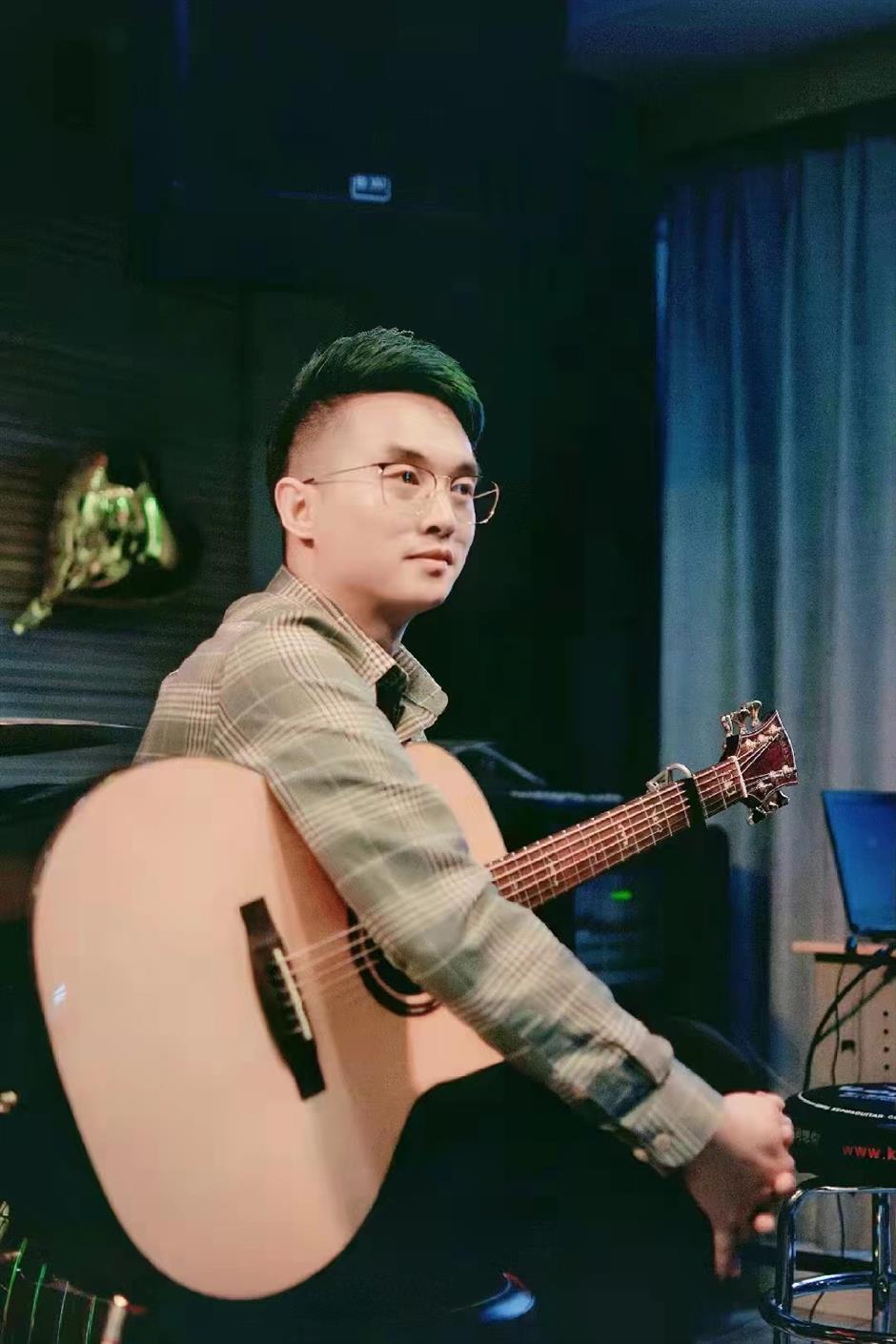 Chen teaches guitar in a class in Shanghai in early 2022.

He, too, tried his hand at livestreaming but soon found out that playing guitar on platforms like Douyin isn't simple.

In July, he then came up with the idea of selling guitars on Taobao and Tmall, popular e-commerce platforms in China. He became a salesman who played the guitar for online buyers of the instrument.

Chen is happy in Hangzhou, where life is slower and rent is cheaper than in Shanghai. He wants to save more money so he can buy a motorcycle next year.

Chen plays a Masaaki Kishibe piece to make a sale.

A sound mixer does his bit in the pandemic fight

Qi Chen works as a sound mixer at Moyin Studio. He is also a product of the Shanghai Conservatory of Music.

Because the studio had a more consistent clientele, the pandemic had little effect on it. Nonetheless, they had to suspend all recordings and shift to the mixing side of the task.

During the lockdown, the studio helped battle the virus. In April, they contributed to the recording and mixing of a song called "Tomorrow Will Be Better," which featured singers and celebrities and was intended to lift people's spirits.

Qi's acquaintances in the sound mixing sector have not been affected by the epidemic in the same way that many other musicians have, because they can still accomplish their jobs while staying at home with only their equipment and computers.

Professional vocalists' recordings may have suffered because they were unable to visit the studio during the lockout. Also, as more musicians become self-sufficient, they can do the song recordings at home.

Qi hopes that the pandemic will end soon so that he can work with talented musicians again.

"When the pandemic is over, I want to see all those wonderful musicians from all over the world again," he remarked. 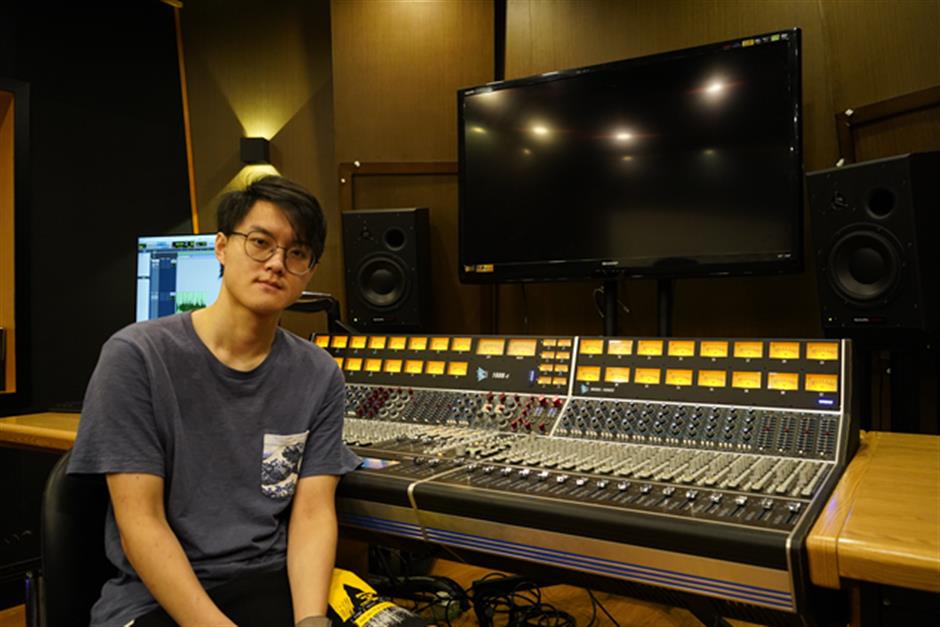 Qi at the recording studio of Shanghai Conservatory of Music.