A skeptical society remains blind to the benefits of guide dogs

The abduction of a seeing-eye dog valued at 200,000 yuan (US$28,890) has once again provoked online discussion about guide dogs for the blind in a society that remains skeptical of their benefits.

On September 4, a visually impaired shopkeeper in Anhui Province called police to report that his golden retriever guide dog Duosite, left untied by the door outside his shop, was taken by a man in his 50s. Surveillance video confirmed that the dog had followed the man onto his moped.

"He usually stayed put when I wasn't using him," the man surnamed Jiang told Beijing Youth Daily. "And he never engaged with strangers. I didn't know why he would follow the man that day."

After the news hit the headlines, lawyers said the dog may be worth 200,000 yuan, and the thief could face 15 years in jail. Two days later, a man took Duosite to the police station, and the dog was returned to Jiang. 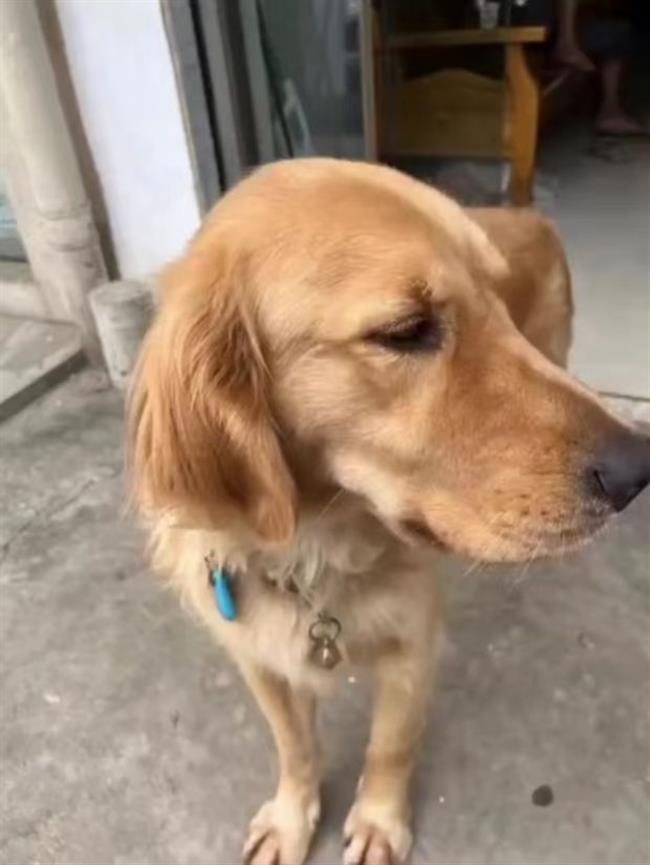 Although guide dog Duosite was returned to her owner, her abduction continues to stir online debate.

The happy ending, however, didn't quell heated online discussion. Many netizens were astonished by the cost of guide dogs and wondered if their services merited such an expense. Some called it "fraud."

"The news reports said guide dogs are better than walking sticks, but they don't seem to be very economical or even widely used," Zhou Zhuocheng, an aquatic biologist, commented on the social platform Weibo. "A family would need to have at least one healthy member to take care of the dog, and the dogs are apparently in service for only six to eight years."

Another netizen with the screen name Yaodaxian went straight to the nub of the debate.

"What's the point of spending 200,000 yuan to train a guide dog if it is easily enticed away from its owner by a stranger?" he wrote.

Wang Jingyu, director of the China Guide Dog Training Center in Dalian, where Duosite was trained, told China News Weekly that the 200,000 yuan was the actual cost of several years of training, beginning when the dogs are puppies.

According to Wang, the center last year had 105 dogs in training and another 40 that had completed training. The annual expense of the center, he said, was about 6.84 million yuan. Costs cover staff salaries, dog food, training gear and medicines. Training is an intensive process. Only half the dogs selected for the program graduate; the rest are adopted out as pets.

"The cost is indeed high, but it's unfair to call guide dog training a 'fraud' because the users get the dogs absolutely for free," Wang told China News Weekly. "We don't sell dogs." 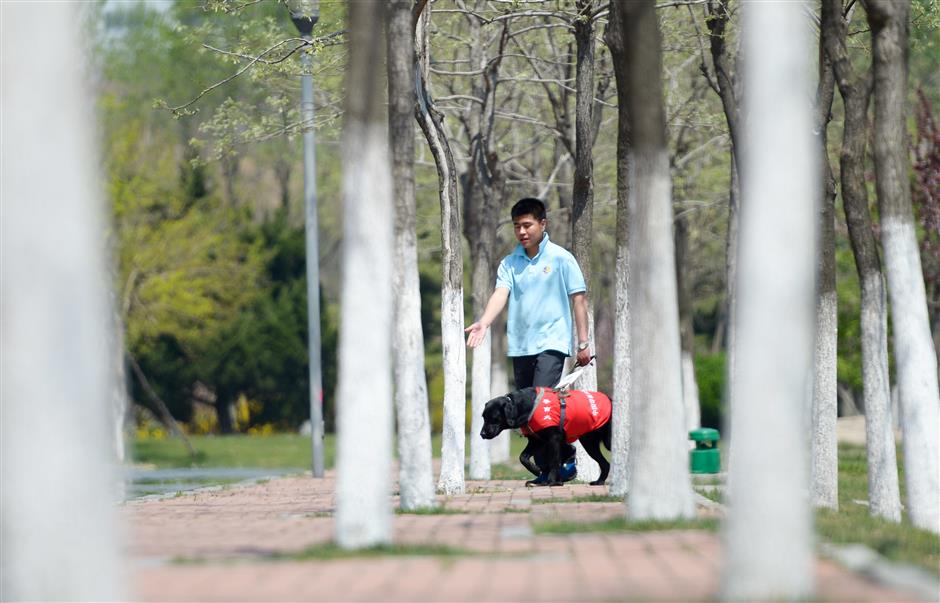 A trainer with a "student" Labrador at the China Guide Dog Training Center in Dalian, northeast China's Liaoning Province.

Wang Chunsun, founder of the Erxing Dog Guides Training Ltd in Yangpu District, told Shanghai Daily this week that the dogs can be stolen, despite training to be loyal to their blind owners.

"Only breeds with gentle characteristics, such as Labradors and golden retrievers, are chosen for training as guide dogs," Wang said. "Such dogs are very amenable to humans, so it's possible they might play with or even follow a stranger if they weren't in work mode."

That's why the public is advised not to interact with guide dogs when encountering them. And, of course, it's a crime to steal one. 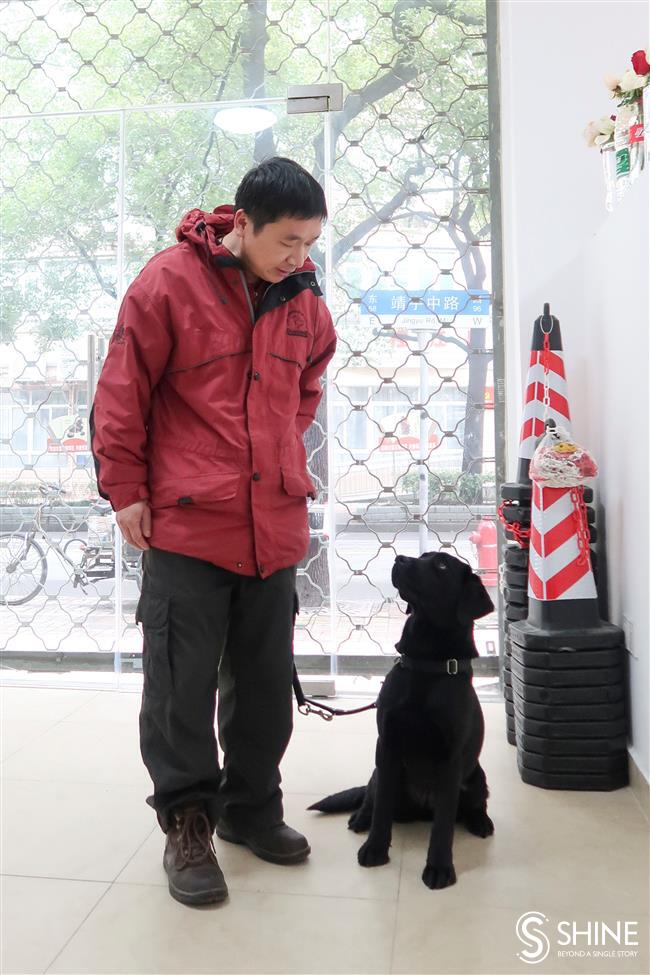 In fact, cases of missing guide dogs have occurred in Shanghai.

The most well-known incident, perhaps, was one involving a Labrador named Ersibin, whose disappearance in 2012 stirred a lot of public attention.

Ersibin went missing from its owner's massage shop and wasn't found for four days. The man who returned Ersibin to authorities said he found the dog on a roadside and it followed him home. It remains a mystery why Ersibin bolted from duty.

What the public may not fully appreciate is how much visually impaired people swear by their dogs.

"When you are used to walking with a guide dog, it is quite difficult to go back to using a simple walking stick," said Melinda Wei, a guide dog user for a year. "The biggest help provided by my guide dog is assisting me to avoid obstacles. When I used a stick before, I sometimes bumped into things. But with my guide dog, I can enjoy relaxed outings."

However, public antipathy toward the dogs remains widespread. That's one reason why the dogs still aren't allowed on buses or in restaurants.

Last year in Shanghai, a visually impaired woman surnamed Liu was assailed by neighbors because her guide dog was pooping in neighborhood gardens.

"They told me to train my guide dog to defecate at home," Liu told Shanghai Television, "but that's not possible because guide dogs see toilets as obstacles that should be bypassed." 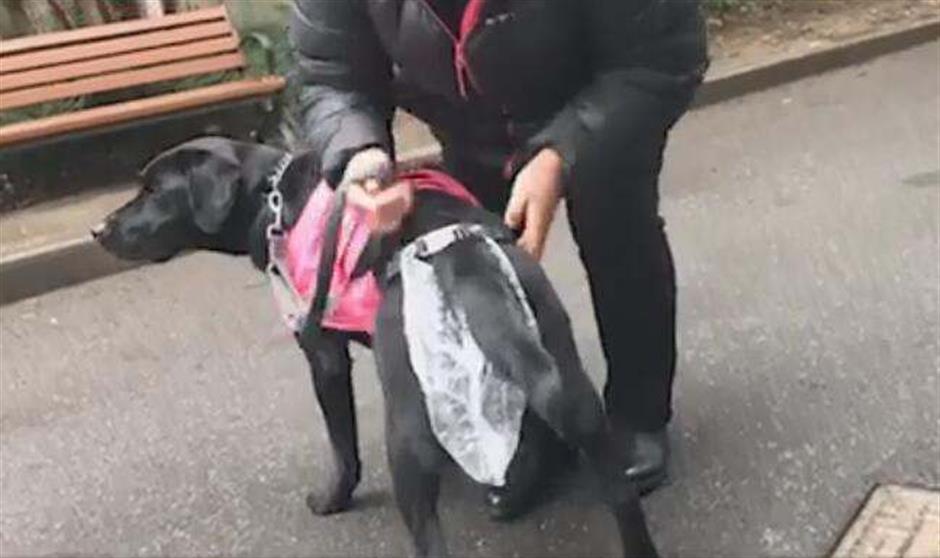 The neighborhood committee stepped into the breach by creating a designated area for the guide dog to poop, but neighbors still complained that it polluted the environment.

Intense online discussion ensued until a guide dog training school paid to plow two small tracts of land in the greenery of the compound where the excrement would be absorbed by the soil. Sanitation workers were dispatched twice a day to keep the designated sites tidy.

Wang Chunsun said public misunderstanding is a major reason why guide dogs have not become more popular in China since they were first introduced here in 2006.

The country now has more than 17 million visually impaired people, but only around 200 guide dogs in service. That's a much lower usage rate than in developed countries.

"There are all kinds of misunderstandings," Wang explained. "Some people believe large dogs are dangerous, but a primary requisite in choosing a puppy for training is its lack of aggressiveness." 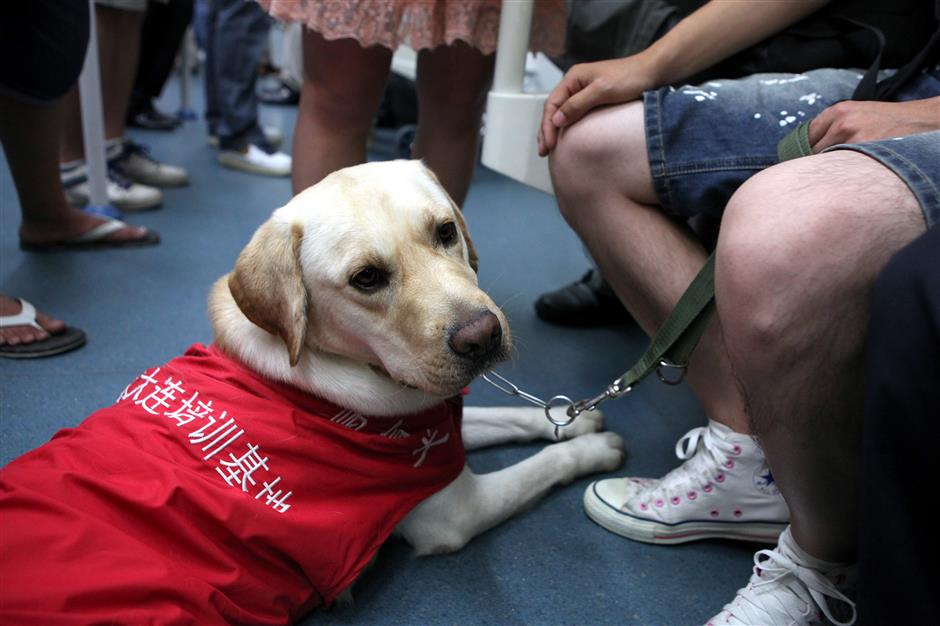 Allowing guide dogs on public transport was long a subject of public debate.

He added, "Some animal activists claim that guide dog training is a form of animal abuse, which is also not true. The method we use in training is called 'positive reinforcement' so that the dogs remain happy and stress-free."

However, there are signs of positive changes afoot.

In the latest regulation on a barrier-free environment issued by the Shanghai government last year, the term "guide dogs" was replaced by "assistance dogs." It stipulated that canines used for helping autistic or physically disabled people should be given access to all public places. Wang said the policy change is a big nod toward working dogs.

The program solicits donations from "cloud adopters" to cover costs such as dog food, training appliances and medication. Adopters can follow the training of the dogs they support online.

"We hope that with a higher profile for the dogs, the public will be more understanding and tolerant," Wang said.