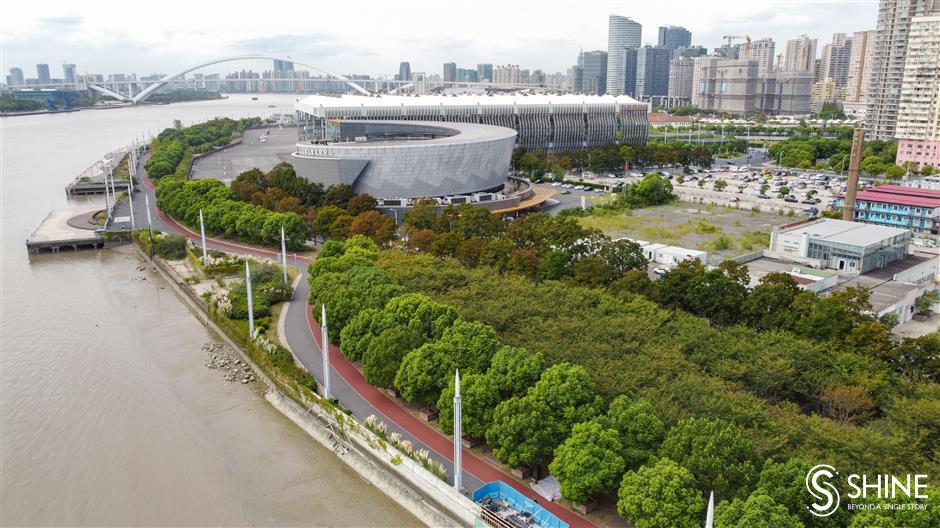 It is an ideal afternoon for Russian student Vika and her friend when they can spread a piece of cloth on the beautiful lawn at Jinxiu Cultural Park in the Pudong New Area.

With a gentle breeze blowing, fresh air and the fragrance of grass, they enjoyed a leisurely weekend in a laid-back and relaxed atmosphere.

Vika, who has been in Shanghai for seven years, brought some books to read while her friend took a nap. It only took Vika five minutes to walk to the park from her home.

"It is a good place to enjoy nature," she said. "I really like walking and the park is big for walks."

The expectation of the public for more green space has become a reality step by step.

"A 'park city,' where residents will see flowers when they open windows, greenways when they walk out, and the fragrance of flowers in all seasons, is the pursuit of Shanghai," said Deng Jianping, director of the Shanghai Greenery and Public Sanitation Bureau. 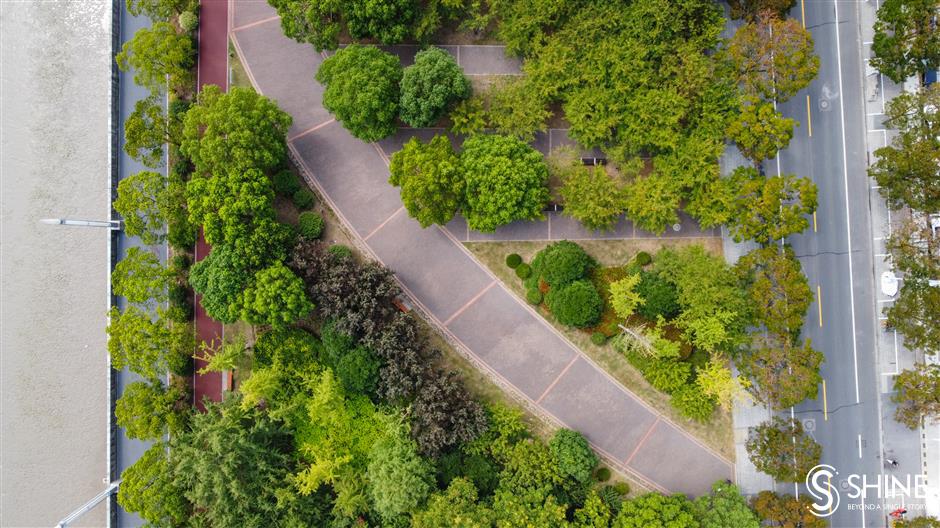 Celine Chanut, from France, who has been in Shanghai for a couple of years, is another witness of the changes.

She still remembers there were only a few greenery options near her place when she arrived in Shanghai some 10 years ago.

But now, she can easily take a stroll on a greenway near her home on Tianshan Road in Changning District.

"Shanghai is a well-balanced city, nicely split between green areas and buildings," she said. "Big changes are obvious along the Suzhou Creek and Huangpu River.

"I like walking by the side of the river," she said. "We have a green area now near our residence where we go walking."

Chanut, who has a pet dog, said she hoped that the city would have more green spaces that are pet-friendly. 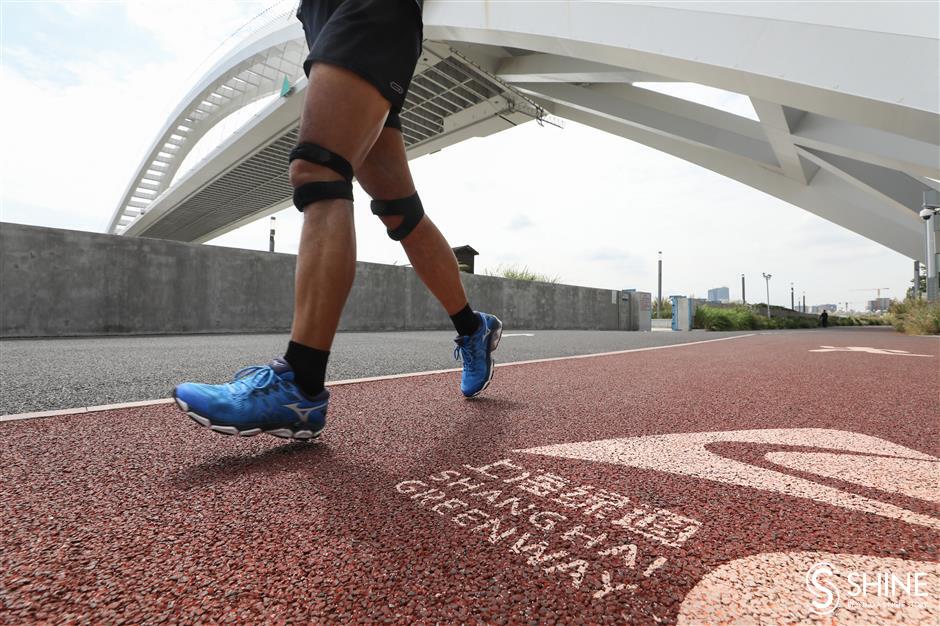 A man jogs on a greenway along Huangpu River.

Shanghai will open 120 new parks every year until 2025, raising the overall number of parks in the city to more than 1,000.

By the end of last year, there were 532 parks in the city, including 103 pocket parks, which are small in size and tucked away among high-rises or along streets.

The city will have an additional 60 pocket parks, 30 urban parks, and 30 countryside parks by the end of this year, increasing the total to over 650. 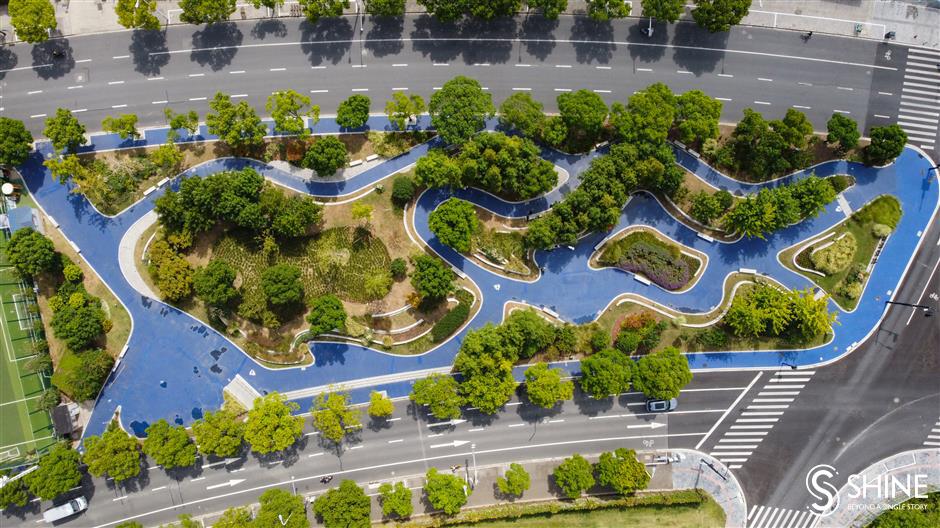 "The goal is to make green spaces accessible to all citizens," said Deng.

According to Deng, several pocket parks will be built or refurbished in the downtown area, and about 50 community-based parks will be established along the Suzhou Creek and Huangpu River, as well as in the five "new cities," by 2025.

"Shanghai will be transformed into 'a city in the parks,' with increased biological diversity and beautiful landscapes," he said.

Deng said the parks would incorporate sports and cultural activities like music and art. 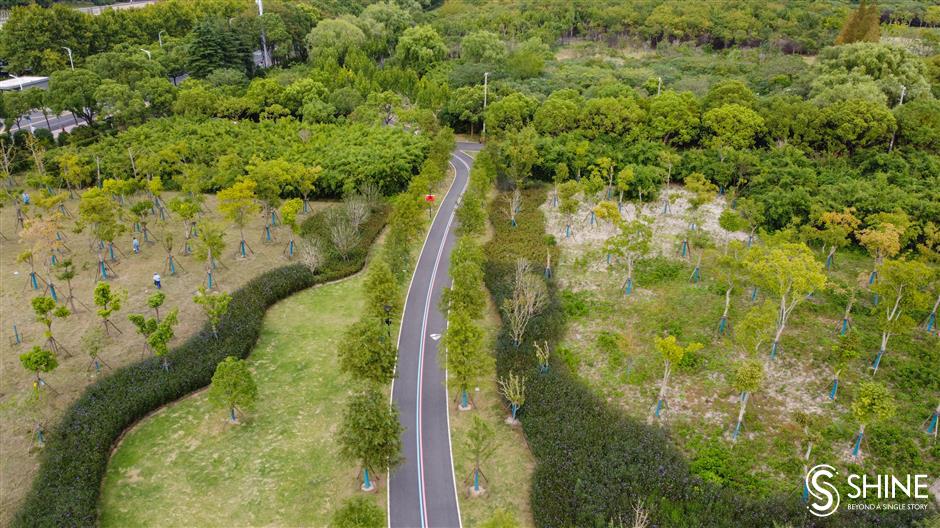 Shanghai has more than 1,300 kilometers of greenway, which is likely to increase to over 2,000 kilometers by the end of 2035, Shanghai's greenery authorities said.

Greenways are paths for leisure and exercise amidst trees, flowers, water, and other natural resources. They include paths in gardens and forests, as well as along rivers and roads.

Shanghai began drafting its greenway blueprint in 2015. By 2025, a 100-kilometer greenway will be created along the Outer Ring Road.

The variety of plant species adds a splash of color to the city's landscape and brightens up people's lives. The goal is to create an "ecological city" in gardens, surrounded by forests and featuring blue skies, lucid waters and green spaces, the bureau said.

The city's forest coverage will amount to 23 percent by 2035.

In Shanghai, parks and greenways are varied in their designs, catering to all types of leisure demands for residents. 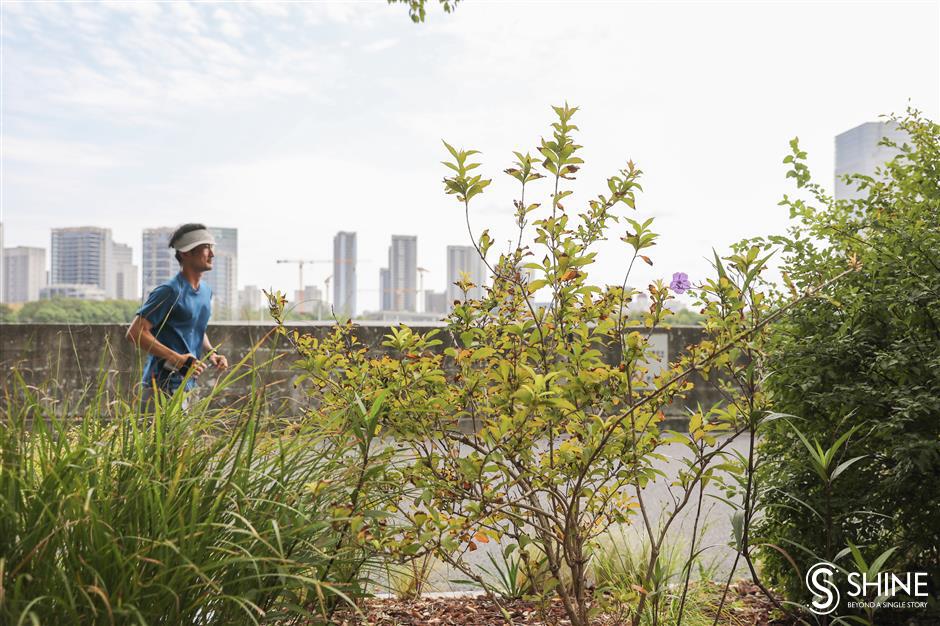 A man jogs along Huangpu River on a greenway.

The Jinxiu Cultural Park, which opened last year, has become a popular getaway for nearby residents. It covers 25 hectares and features a 1.6 kilometers greenway lined with goldenrain trees, soapberry and plane trees.

It comprises two separate tracks for jogging and walking.

"In the early morning and at night, there are many residents here, jogging or simply taking a stroll," said a sanitation worker, surnamed Pan.

Zhang Yu, a shutterbug in Pudong, discovered that he had more and more spots to take photographs near his home.

"These parks and greenlands all have different features, which have all sparked my inspiration," he said. "There are too many options, which are sometimes a "sweet burden" for those with selective phobia."

On sunny or cloudy days, retiree Qian Wei, who lives in Xinzhuang Town in Minhang District, takes a walk in the morning along the Dianpu River greenway. When he is tired, he rests on the benches or chats with friends.

"Significant changes have taken place. The tracks used to be nothing but concrete, "Qian recalled. "In recent years, the sludge from the river has been cleared, and a large number of plants have been planted. There are many residents, including young people, who bring their children here." 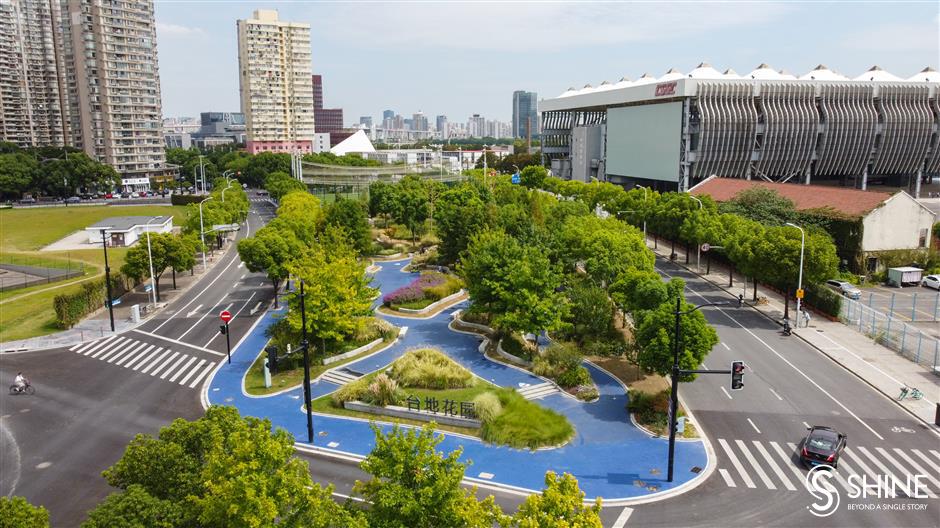 Along the Huangpu River and Suzhou Creek, a number of greenways in Huangpu, Hongkou, Xuhui and Pudong districts, totaling about 20km, have mushroomed, injecting new vitality into the area.

The Huangpu River waterfront greenway, known as the "No. 1 municipal greenway," which stretches 8.3 kilometers, has become a popular getaway for residents and tourists.

The colorful landscape near the Waibaidu Bridge attracts photographers and visitors as locals go about doing exercises or simply immersing themselves in a little oasis of urban tranquility.

The greenway's bricks are decorated with colorful glass and the mosaic style, which has an old Shanghai flavor.

The Zhengqing Road greenway in Xinjiangwan Town in Yangpu District used to be a place filled with trash, and weeds were taller than average human beings.

But after renovation, it looks completely different, attracting many birds. Plants with vibrant foliage, such as red maples, were planted, and slopes on the greenway have been smoothened to make it more friendly for elderly residents and children.

An ecological greenway along the Outer Ring Road in Changning District features about 150 varieties of plants, almost equal to a botanical garden. Hydrangea, iris, gaillardia, and vervain are in full bloom. There is even a Chinese rose wall. 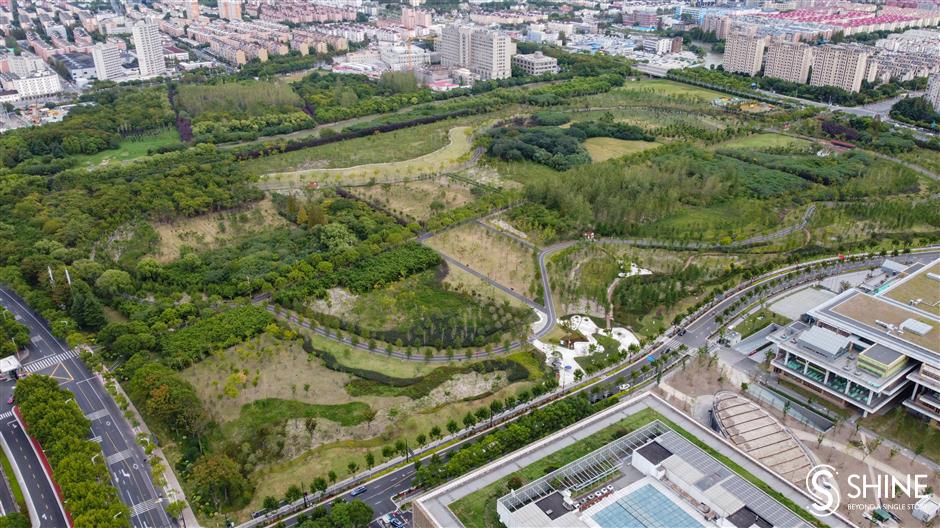 Some representative greenways in Shanghai are listed below:

Basic information: Known as the "No. 1 municipal greenway," it is 8.3km long and has walking, jogging, and cycling tracks. Seven theme parks line the path.

Location: Along the riverfront between Yangpu Bridge and Xupu Bridge

Basic information: It features about 150 varieties of plants, such as hydrangea, iris, gaillardia and vervain, which are in full bloom during different seasons. It also has a Chinese rose wall.

Basic information: The 6km greenway adds a splash of color to the Suzhou Creek. It features a variety of floral plants such as cherry blossoms, magnolia, and crape myrtle, presenting a unique view.

Location: There are different sections. One is near Bandao Huayuan residential complex, and one between Wuning Road and Caoyang Road. The rest one is between Baocheng Bridge and Wuning Road Bridge. 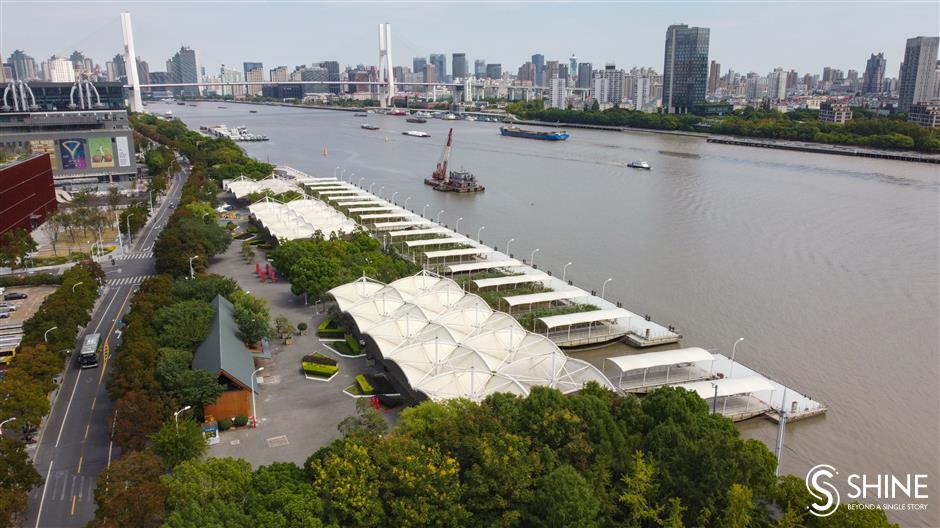 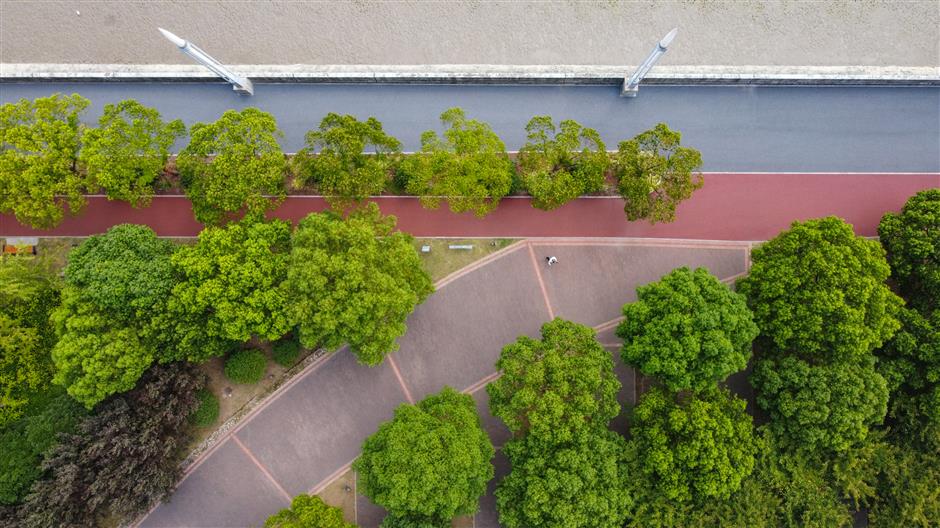 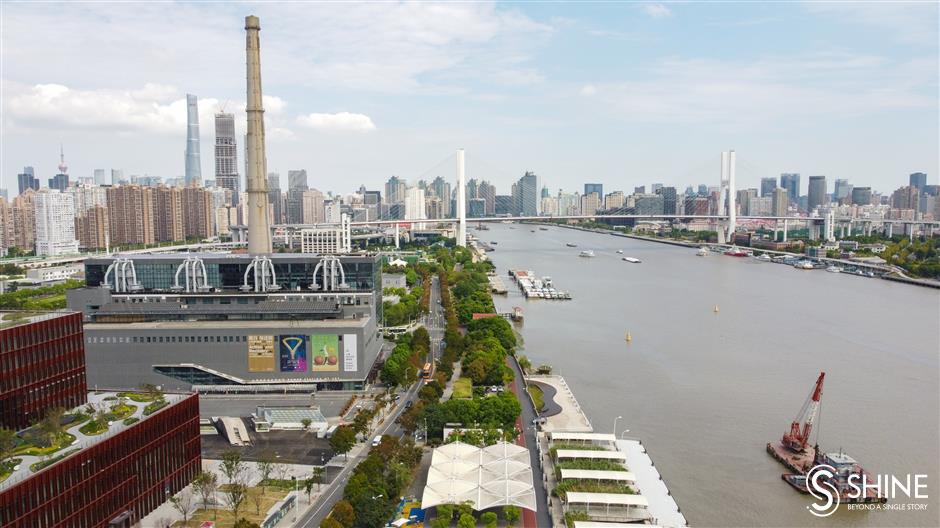 View of the Huangpu River 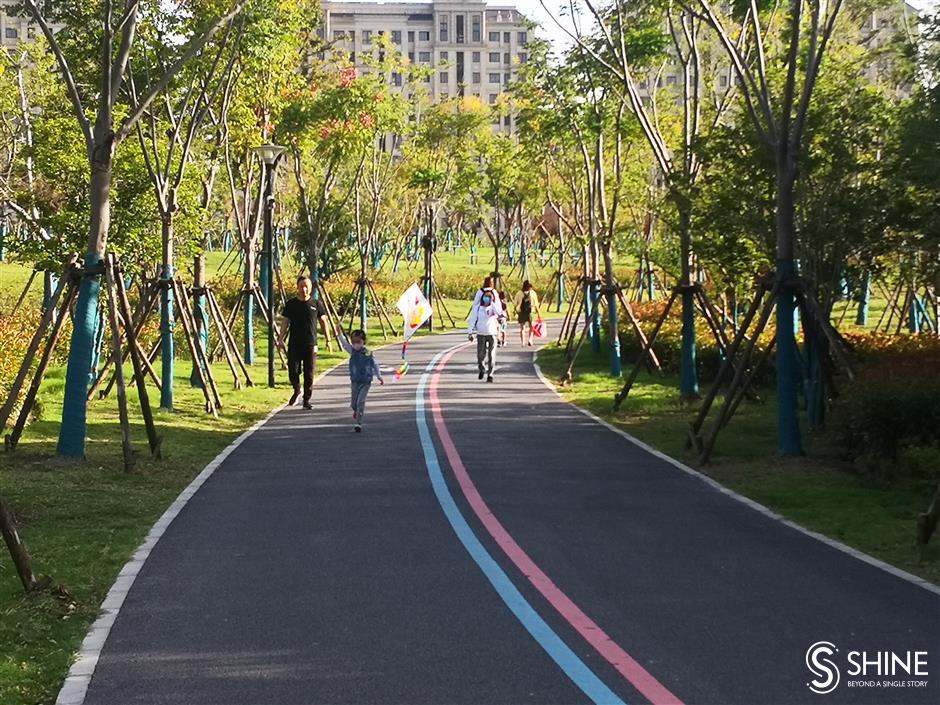 A child flies kites on a greenway at Jinxiu Cultural Park