'Reactivated' Shanghai brings back the joy of weekend market

The joyful hustle and bustle of a weekend market is a scene long missed by many in Shanghai. Little wonder then that a short video recording of such a market went viral quickly.

The video shows kids drawn to various kinds of games amidst the smell of fresh produce, colorful stalls and lively chatter.

Customers, local and foreign, stroll by dozens of stalls, and bargain over hand-crafted treats from tasty snacks to stylish knick-knacks in English, Mandarin, and sometimes Shanghainese.

"It was like a dream when I saw the video, a familiar scene that's disappeared from the city for quite a while," said Natalie Cheung, who left early in the year for London and has been pondering when to return.

"I have been hearing from friends that the city has been re-activated, slowly and gradually. But I wasn't sure how 'activated' until I saw this (video), which really reminds me of my many gorgeous times in Shanghai. I hope that's just the start."

It was the Golden Autumn Market at Ambassy Club on Huaihai Road M., held last Saturday by the city's famous Jiashan Lane Market. Around 40 vendors participated, with organizers encouraged by the good turnout and satisfying feedback. 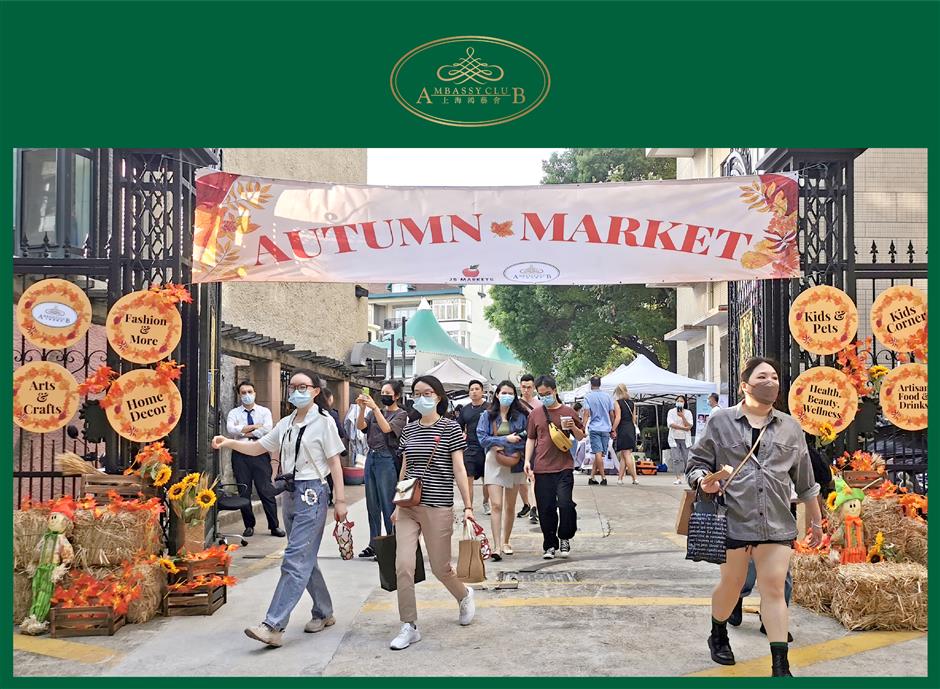 "The 'magic city' of Shanghai is a confident, developed, cosmopolitan, and inclusive metropolis. People here come from all over the world, and many consider Shanghai their second home," Helen Yang, the club's operation manager, told Shanghai Daily.

"We're very honored to find the Golden Autumn Market drawing so much attention. We hope the long-missed atmosphere can add some vigor to the city's economy. I hope Shanghai will continue to improve, and please look forward to the return of our Halloween Market."

American David Henry, the man behind the Jiashan Lane Market, is one of those who considers Shanghai his second home. "I committed myself to coming back. I've lived and worked here for 26 years," he said, recalling the time when he left for home in Rhode Island a few months ago.

"It was nice to finally get to see my family after three years. But I committed myself to coming back. Much of my life is centered here. This is where I can be who I am."

He tried to prepare as well as possible, but the return was long and difficult, and it was equally challenging to come back to day-to-day work after a four-month vacation.

The city has been in the process of revival post-COVID, with noticeable announcements by authorities.

Last week, Shanghai lifted restrictions on street vendors, allowing district, village and town governments to allocate certain public areas for business activities such as setting up stalls, according to the latest amendment to relevant regulations.

A child experiences face painting at the market.

Launched in 2002, the regulations were first amended in 2003 to forbid street vendors in public places such as roads or bridges, among others.

Shanghai is also welcoming business owners to go artistic with their outdoor signboards, which were previously uniform. Officials said it was to "reflect the diversity of the city."

When Henry returned at the end of August, the last live market he organized was already seven months ago, before the Chinese New Year. In those months, they tried virtual markets, but everyone has been longing for a live version.

"We had planned for a much smaller market, but so many very good vendors were so eager to join, and we kept growing," he noted.

"It's a pity that some vendors were gone, but then you also have some new vendors who want to join."

The first comeback was at Anken Air in Changning District, a new venue for the vendors, followed by the big comeback at Ambassy Club, a long-term partner. The latter was almost the scale of the ones they held at the same venue in the past.

"We hoped for a good turnout, and it was even better," Henry recalled. "It was a great joy and very encouraging. I'm happy to be back."

Now Henry and the vendors have planned something bigger. A Golden Week Market, between October 1 to 5, will be held at the spacious Laowaijie in Hongqiao. This time, they will have live music and more activities.

"I really see these markets as a kind of community building," he concluded. "And I hope we can bring them to more communities in the city." 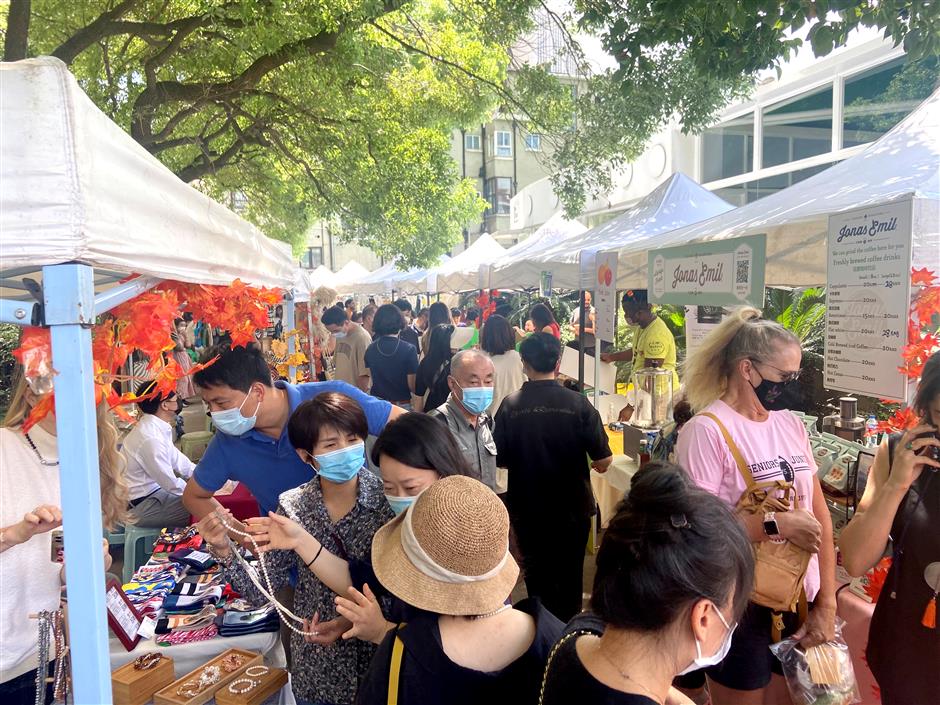 Amid the bustle, customers peruse the stuff on offer at an art and craft stall at the market.