24-hour gyms step up to the mark in Shanghai 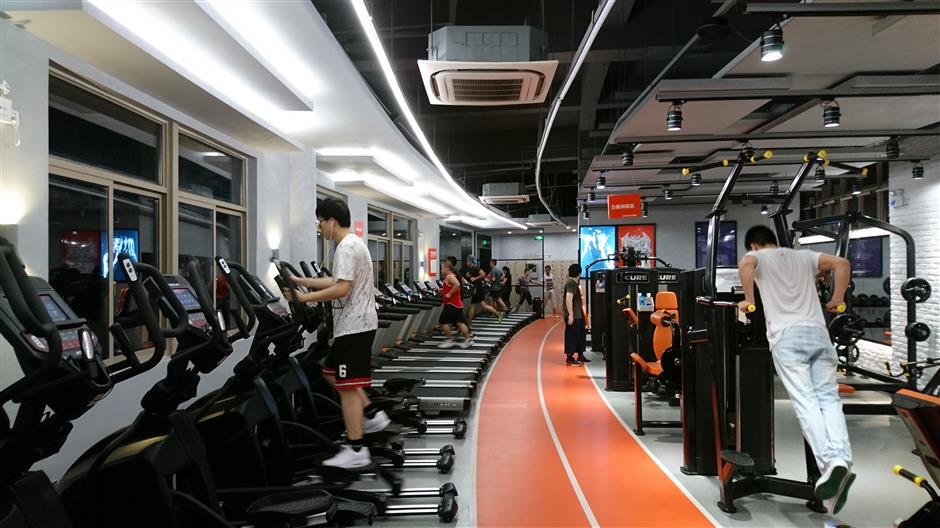 Most people think of night as a time to sleep, not exercise. However, there are some people whose work schedules or dislike of crowds don’t make daytime exercising convenient. To cater to these night owls, 24-hour gyms are sprouting up across Shanghai.

Though quite common in the United States and other Western countries, 24/7 gyms are a relatively new trend in China.

At a gym in the Yangpu District Citizen’s Fitness Center on Longchang Road, it’s 11pm and 15 people are soaked with sweat as they exercise. They are members of Lefit, a Hangzhou-based gym chain that moved into Shanghai a few months ago.

Unlike traditional gyms that usually close before 10pm, Lefit members scan QR codes on the doors with their phones to gain access at any hour.

During the day, the gym provides aerobics, dancing, yoga and body building courses just like ordinary gyms. By 9:30pm, coaches and staff begin closing up unless members have made late appointments with their personal trainers. 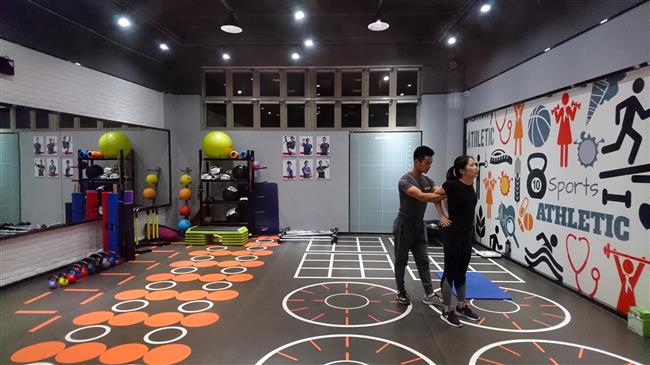 Coaches and staff start leaving at 9:30pm unless gym members have made late appointments with their personal trainers.

“The gym is close to my house and suits my exercising habits,” Lefit member Zhang Chao told Shanghai Daily.

An information technology worker, Zhang said he visits the gym almost every day, spending 90 minutes on bodybuilding. He said about 10 to 20 people show up for exercise between 10pm and midnight. Most are students and nearby residents.

“I used to go to a gym near my office after work and would have to rush if I finished work late,” Zhang said. “Then I found this 24-hour gym, and it really suits my lifestyle. Membership fees are also reasonable.”

Lefit charges a monthly fee of 199 yuan (US$29.60) for access to any of its 29 branches around Shanghai. Personal fitness courses are priced at 180 yuan an hour, which is below the average. 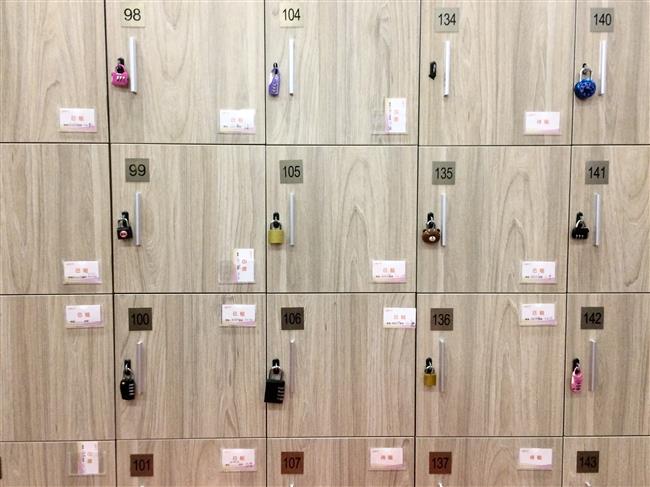 Lockers are provided though shower is not available at Lefit.

“In Shanghai, people in sectors like finance, restaurant and beauty salons often have to work late at night, and these gyms suit their needs well,” said Su Jinggang, an operations director of Lefit.

According to Su, the Longchang Road gym is Lefit’s biggest branch in Shanghai and is partially supported by the district government. The Yangpu District Sports Bureau provided the space and helps to manage the gym. To save costs, Lefit does not provide showers in any of its branches.

For late night business operators, safety is always a concern. According to Li Rong, a staff member at the Longchang Road gym, the facility is covered by 24-hour surveillance cameras, and members can press an emergency button if they need help, no matter what the time.

“The buttons are connected to our service center, where we have staff on duty at all hours,” said Li. “No emergency cases have been reported yet since the gym opened in May.” 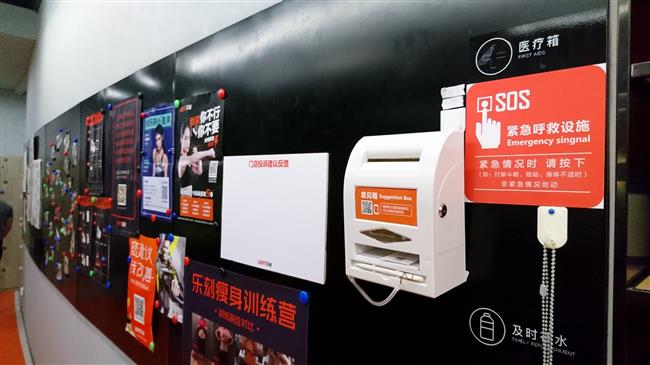 Gym members can press an emergency button if they need help.

Long-distance surveillance is a common practice for 24-hour gyms in Shanghai.

At the Anytime Fitness gym on Pudong’s Biyun Road, security facilities are set up at the entrance, including a phone and an emergency button. Niko Yang, a personal trainer at the gym, said an operator in the company’s central service center will call on the phone if the emergency button is pressed at a gym. If the phone is not picked up within two minutes, staff will be sent to the site.

Defibrillator equipment is also installed in the gym in case of medical emergencies. 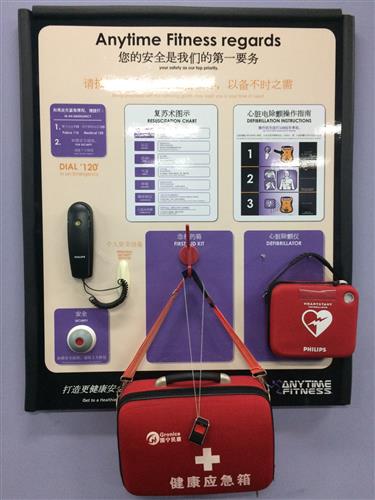 Defibrillator equipment is provided at the Anytime Fitness gym.

US-based Anytime Fitness has opened two gyms in Shanghai and plans to expand later this year. Staffing is provided from 9am to 9pm on weekdays and 10am to 6pm on weekends. During unstaffed hours, members can enter the gym by scanning their electronic key at the gate.

According to Huang Ying, an office worker who visits the gym at least three times a week, there are usually three to four people exercising after 10pm.

“The facilities here are Western style, and there is a lot of strength and muscle building equipment,” said Huang, who pays about 400 yuan per month for her membership. “I chose this one mainly because it’s close to my home.” 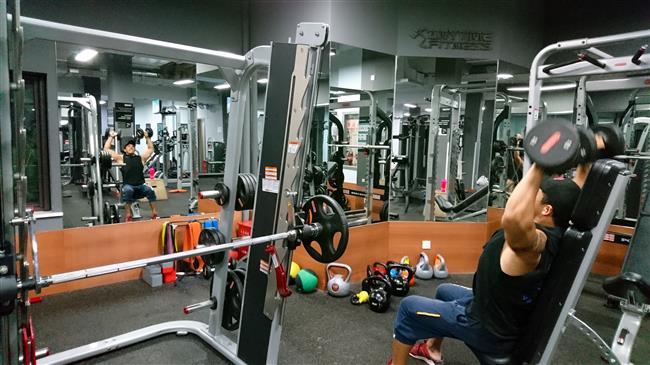 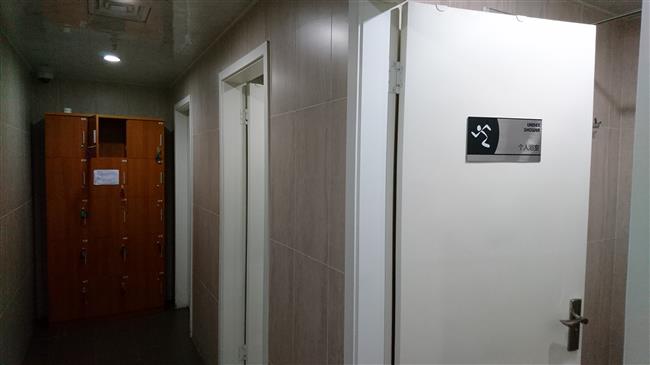 Shower is available at Anytime Fitness.

According to Niko Yang, some members stay working out until 1am, and some come as early as 4am.

“We have quite a number of foreigner members because there are several international schools in this area,” Yang said.

“Space rental and staff wages are the major costs when running a gym,” said Gao Sheng, Anytime Fitness alliance director in China. “With a 24-hour format, we can reduce staff costs and narrow down space to target certain customers. More branches will be opened in China in the next three years.”