MOTORCYCLES with non-Shanghai plates are banned within the Outer Ring Road in Shanghai, but that doesn’t mean they are no longer seen.

Far from it, especially in less busy areas, as motorcyclists eager to earn some extra income look for passengers needing a lift to and from Metro stations.

While shared bikes and buses are available, Metro passengers often prefer motorcycles because of their convenience.

But using them is a risky option because they are operating on an illegal basis.

Traffic police are cracking down on the miscreant motorcyclists — and are doing so in plainclothes to make it harder for offenders to escape being caught.

Yesterday morning, five offenders were caught on Sanmen, Yingao and Songhu roads. One officer from a team of six plainclothes traffic police in the area approached a motorcyclist as his passenger was getting off and pulled away the engine key.

Then the officer showed the offender his police badge and asked unformed colleagues to hand out a punishment. 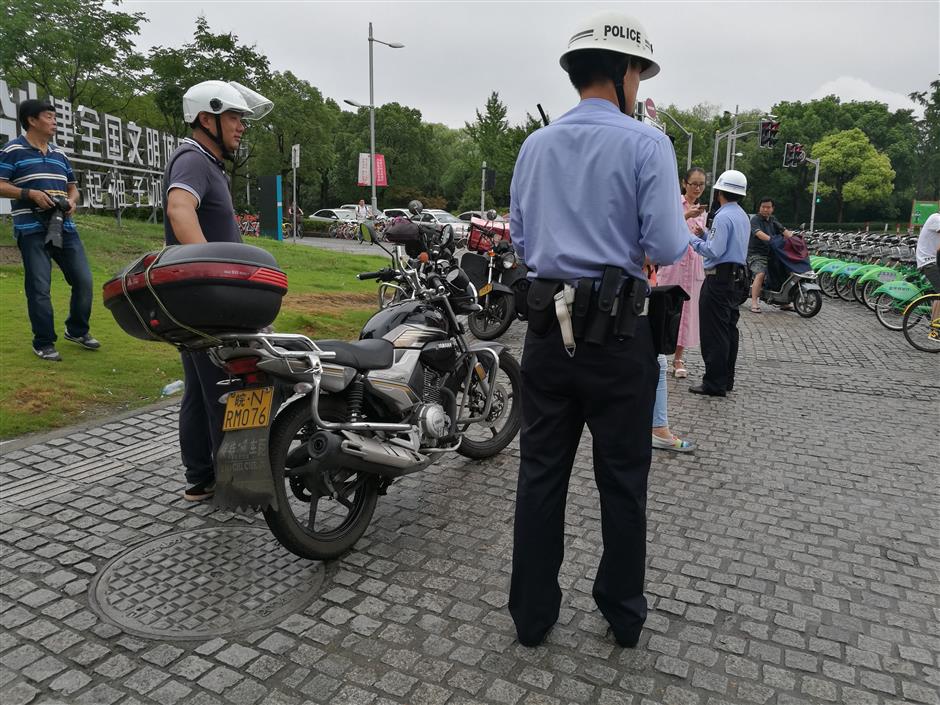 A man illegally riding a motorcycle with a plate from Anhui Province was stopped by the police at the metro station of Yingao Road E. on Line 10 on Wednesday morning.

“The motorcyclists would flee right away once they see police officers in uniforms coming around, and with policemen chasing behind they would sometimes break traffic laws and pose a danger to other road users,” said Zhao Kangwei, head of the 34-member motorcycle team of Yangpu traffic police.

There are worries about the plainclothes officers being recognized, according to Zhao. “The illegal motorcyclists usually appear during morning and evening rush hours when there are a lot of people at the metro stations,” he said. “Our team members take turns to go undercover.”

Police hope this measure, which has been increasingly implemented in other districts, will gradually deter the illegal motorcyclists.

Hard to clear the field

Motorcyclists found with non-Shanghai plates within the Outer Ring Road are fined 200 yuan (US$30), with three demerits on their licenses, and motorcycles which don’t have valid inspection and insurance papers will be temporarily confiscated by the police, according to China's traffic laws. 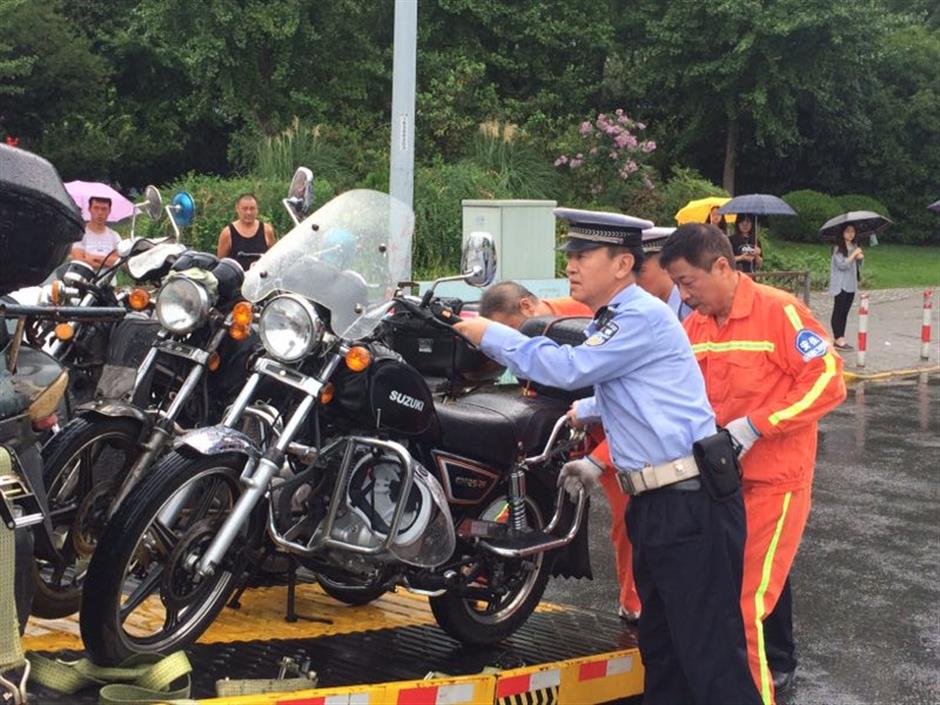 To get their motorcycles back, the offenders should provide the police with the required papers and a shipping invoice from a logistics company which will transport the motorcycle out of Shanghai.

But Zhao said it’s not possible for the police to watch the offenders eventually transport the motorcycles away.

A few offenders this morning told Shanghai Daily that it was not the first time that they were caught and punished for this offense.

One of them, a man surnamed Chen, who was riding a motorcycle with a plate from neighboring Jiangsu Province, said he was taking his wife to work when he was stopped by police.

Chen, who is from out of town, said he has been riding this motorcycle for a few years to and from work in another district.

“I ride a motorcycle to save time because my work is too far away from where I live, and I have to pay the fine again and again because I will never be able to afford a Shanghai plate,” he said.

This means that a Shanghai motorcycle plate could be even more expensive than a Shanghai car plate.

The reason behind their skyrocketing prices is that the city stopped issuing motorcycle plates from about 15 years ago, and that the more versatile plates from A category can be turned to car plates which are also highly coveted commodities in Shanghai, according to insiders.