Great cities of the world are distinguished by their waterfronts. Think Sydney, San Francisco, Paris and Rio. Shanghai is rapidly putting its name at the top of the list.

Tourist Richard Huppatz said the banks of Shanghai’s Huangpu River make him feel like he’s back home in the Australian seafront city of Adelaide. Even better than home, he added.

Huppatz said walking along Shanghai’s riverfront is a great way to get to know the city. He braved sweltering heat of 36 degrees Celsius recently to walk along the Pudong riverfront near the Kempinski Hotel where he is staying. Then he took a ferry to the opposite North Bund waterfront in the Hongkou District.

“This is probably one of the best riverside areas in the world to walk, jog or cycle,” he added. 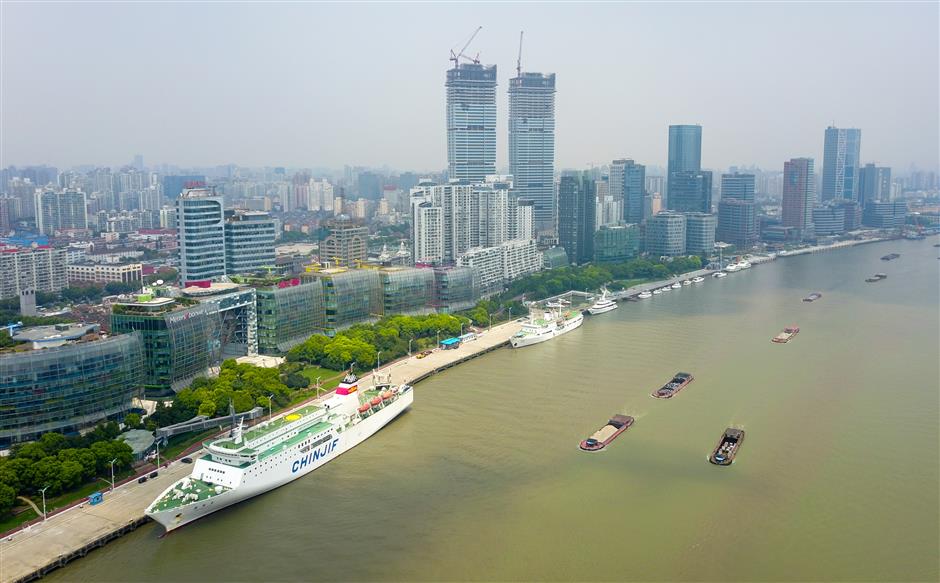 The Bund in Shanghai has long been a magnet for residents and tourists alike, but now vast swathes of the riverfront are being redeveloped and opened to the public. More than half of the riverbanks in downtown Shanghai are now accessible.

By the end of this year, the city government plans to open up 45 kilometers of waterfront between the Yangpu and Xupu bridges. The entire project has been compared with the Left Bank of Paris or the Thames walkway in London.

Ni Li and her husband Zhang Minzhi lived along the riverfront on the North Bund for more than five decades before they were relocated to make way for urban redevelopment. Her family once operated a workshop supplying canvas for cargo ships.

The couple never tires of the riverfront. Living not far away, they walk to the Hongkou riverside every day after dinner. 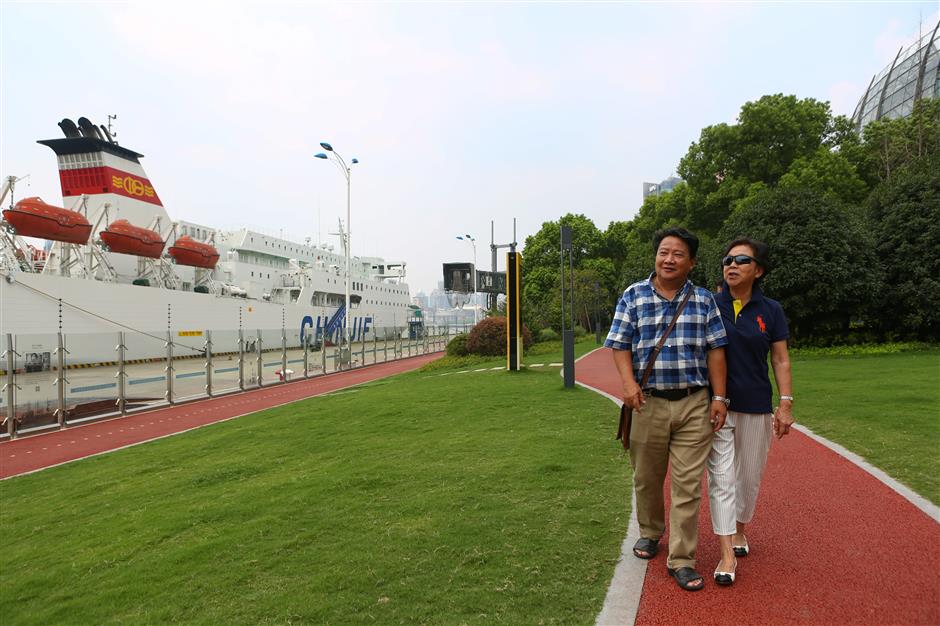 Ni Li and her husband Zhang Minzhi walk along the North Bund riverfront of Huangpu River. Her family lived along the riverfront for more than seven decades before they were relocated to make way for urban redevelopment.

“The waterfront has changed so dramatically,” said Ni. “I can still remember scenes from my childhood -- stevedores in ragged clothes loading cargo onto ships berthed along the river and foreign sailors milling around drunk.”

In the past, access to major portions of the riverfront was barred. Nowadays, it’s open to everyone.

“I feel like I am still living along the river,” Ni said. 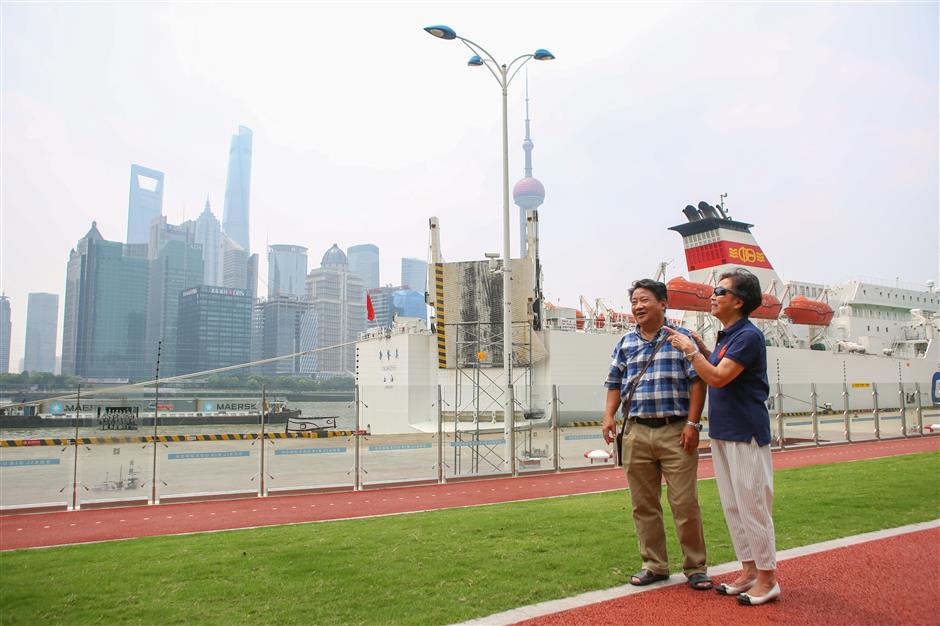 Living not far away, Ni and her husband still walk to the riverside every day after dinner.

The Huangpu, Shanghai “Mother River,” once served as a major shipping and transport hub with warehouses, wharves and factories. Over time, most were abandoned and left to decay. Old housing in the area became derelict.

Urban redevelopment is transforming the North Bund into an eco-friendly area of craft shops, cafes, art studios, recreation grounds and sightseeing opportunities. Historic landmarks in the area are being protected and renovated, according to the Shanghai Planning, Land and Resources Administration, the city’s top planning body.

“We studied seven popular riverfronts across the world in designing the blueprint for Shanghai’s waterfront,” said Wu Panfeng, director of detailed planning for the administration.

The reference areas were San Francisco, Hong Kong, New York, Seattle, London, Paris and coastal sections of the state of New Jersey in the US, Wu said.

The San Francisco waterfront, for instance, provided ideas about greenery, while New Jersey demonstrated ideal transportation connections between coastal and inland areas. Kowloon in Hong Kong delivered concepts of waterfront sports facilities, and the development along the River Thames showed how commercial facilities could be included unobtrusively. And the Seine riverfront in Paris is famous for its cultural landmarks, Wu said.

“The core concept is to give the ‘Mother River’ back to the residents of Shanghai,” Wu added. 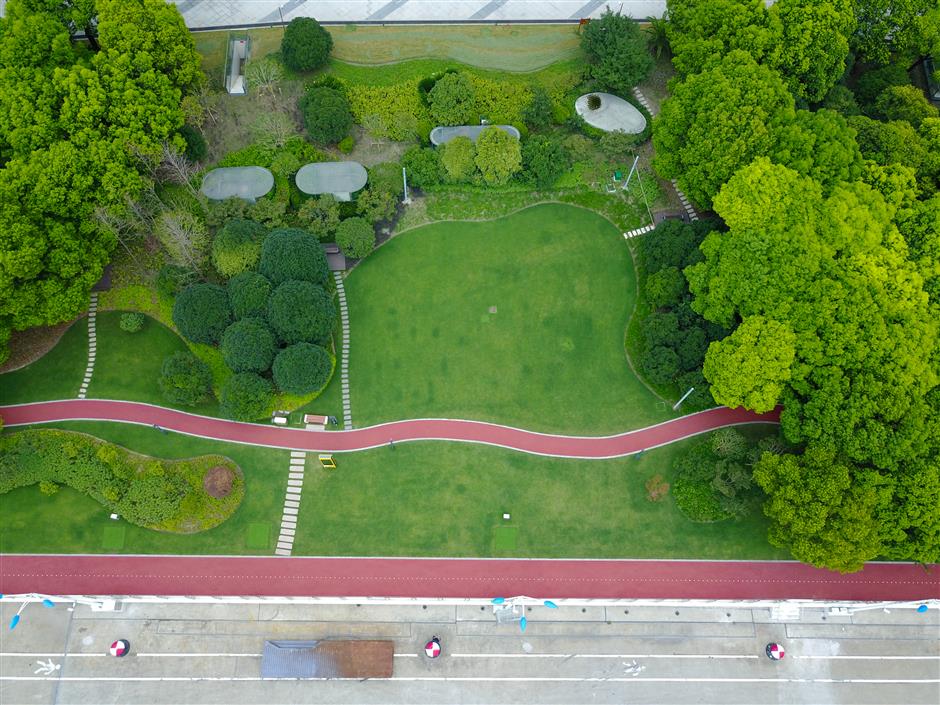 In the past, access to major portions of the Huangpu Riverfront was barred. Nowadays, it’s open to everyone.

Zhong Lu’s mission is put that vision into reality. As landscape architect director with the Shanghai Municipal Engineering Design Institute, her team laid out the design for large sections of the riverside redevelopment project.

“The most challenging part has been turning former industrial areas into places of pleasant leisure lifestyle,” Zhong said.

The team put tall trees along the borders of pedestrian and vehicle lanes, and planted short shrubbery between pathways and the river to avoid obscuring the scenery.

Even old industrial sites have been retained in the design, upgraded to new uses, especially in the Yangpu District, Zhong said.

Yangpu’s riverside was once home to many of China’s earliest industries, including paper and textile mills, shipyards, a water plant, a coal gas plant and even a fish market. Many of them date back almost a century.

Another challenge for riverfront planners was how to handle disconnected areas, like docks for ferries, ships and sightseeing cruises, and office buildings owned by state-owned enterprises, Zhong said.

Her colleague Dai Wei, deputy director with the institute’s transport department, offered the solution — pedestrian bridges that span waterways and skirt vital urban facilities that obstruct smooth passage along the riverfront. About 20 are already under construction. 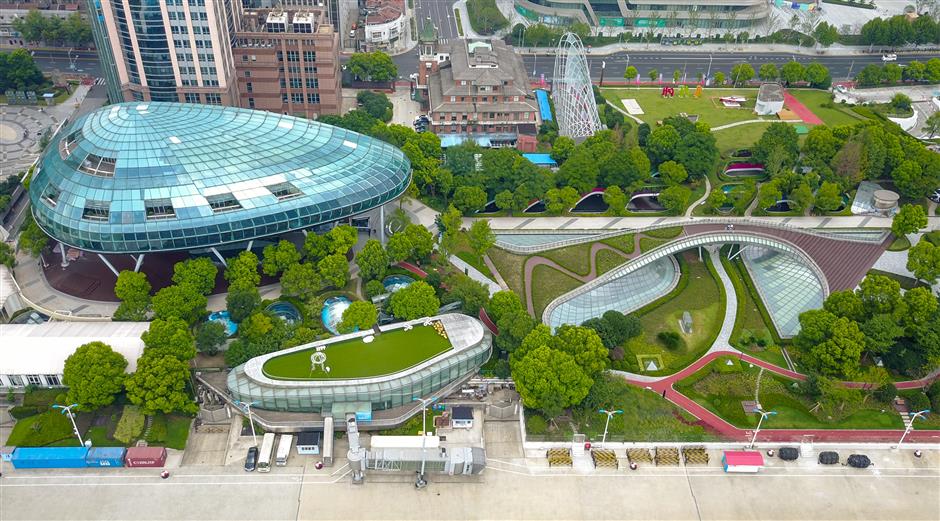 The Rainbow Bridge in the North Bund (right) is the favorite of Ni and her husband. From the bridge, they can look over and see their former community.

The sightseeing bridges — 12 in Pudong and the rest in Puxi — will have separate lanes for walkers and cyclists. They are expected to become major attractions for both residents and visitors, Dai said.

Among them, the Rainbow Bridge in the North Bund is the favorite of Ni and her husband. From the bridge, they can look over and see their former community.

The 200-meter-long bridge is illuminated by colorful lamps at night. It’s a bit steep for a couple in their 70s to climb, but Ni said her husband always holds her hand going up and down stairs. It reminds her, she said, of the years a half century ago when they met and courted on the Huangpu waterfront.