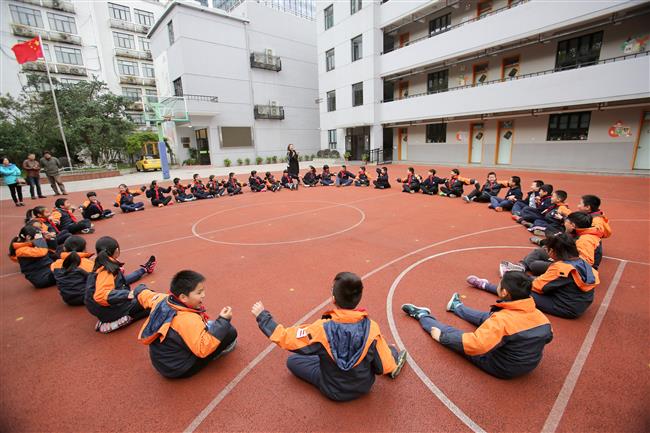 Four out of five primary and middle schools across Shanghai have opened their sports facilities to the public for free at weekends, holidays or at other times when not needed by schoolchildren.

It’s all part of the city’s campaign to encourage citizens to be more involved in sport.

The campaign of encouraging schools to make their sports facilities accessible to the public was first introduced by Shanghai Sports Bureau about 10 years ago. The management work was handed over to Shanghai Education Commission this year, which is assisted by neighborhood level officials.

Citizens can join the campaign by handing in applications to a school. After getting approval from the neighborhood civil affairs offices, the school issues entrance cards to the applicants.

According to Shanghai Education Commission, about 1,260 schools around the city — 83 percent of the total — have now opened their sports facilities to the public.

Yangpu District’s Senior High School Affiliated to University of Shanghai For Science And Technology was among the first batch of schools to join the campaign.

The school’s president, Shen Hong, said the school opens its playground, tracks, badminton, tennis and basketball courts to the public at weekends from 8am to 4pm.

“School resources are also social resources. Most of those coming to use our facilities at weekends are nearby residents,” Shen told Shanghai Daily.

“As well as security and administrative staff, the school’s medical clinic will also stay open in case of emergency. The authorities also bought accident insurance for the school,” said Shen. “The extra cost of the operation can be covered by the subsidy given by the government.”

In the Pudong New Area, 265 public primary and middle schools had joined the campaign by the first half of this year, counting for 97.4 percent of the total amount.

For the eight schools in Pudong’s Dongming Road neighborhood region, over 20,000 entrance cards have been issued over the past decade to give nearby residents free access to the sports facilities.

Pudong New Area Social Development Bureau’s moral education office is working on a revised version of management regulation to standardize the number of school staff and the installment of lighting and surveillance systems.

The open hours of the schools can be found on www.shmec.gov.cn.

For universities and colleges, there is still no such requirement, though over 85 percent of them open sports venues to the public frequently with or without charge, according to Shanghai Sports Bureau.