Dodgy meters, fake invoices and detours are just some of the tricks some unlucky passengers face taking taxis to or from Shanghai Disney Resort.

In fact even the taxis might be fake, and the drivers unlicensed.

But the good times might be over for the bad guys.

A crackdown from July has snared 12 illegal taxi drivers taking and releasing passengers at the taxi stand of the resort and at some nearby spots, Pudong police said on Tuesday.

Leading the effort is Song Liming, a traffic police officer who has 12 years of working experience. He is joined by colleagues at the police department of Shanghai International Tourism and Resorts Zone and urban management officers.

The law enforcers check suspicious taxis for authentic registration plates and the drivers' licenses as well as noting tourists’ complaints about poor service because drivers who are subject to complaints are considered to be more likely to be driving fake taxis. 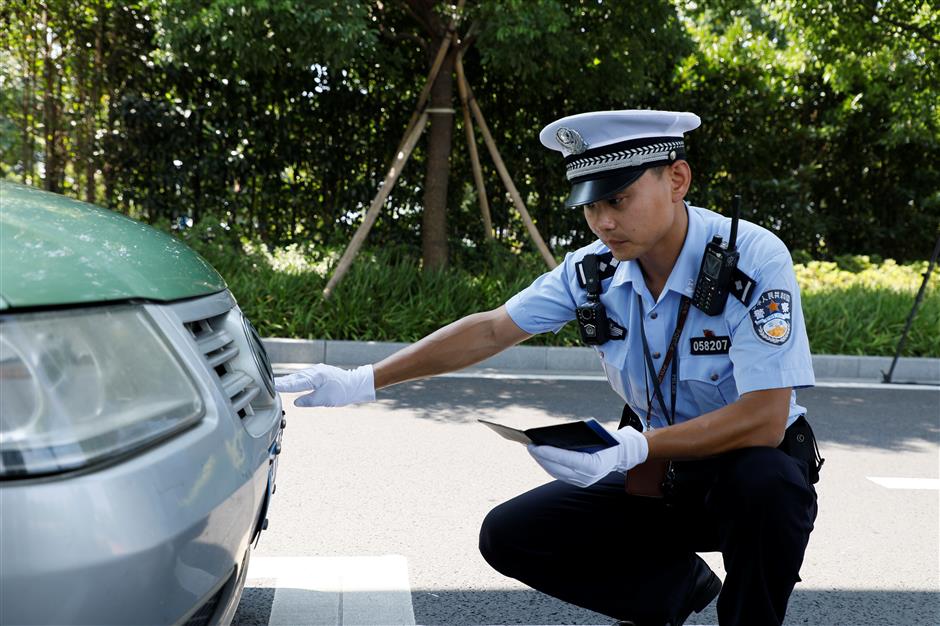 Song Liming checks out a taxi on Tuesday morning.

Song said complaints about fake taxis rarely come from tourists probably because it can be hard for them to discern illegal taxis.

“Experienced traffic police can tell a fake car plate much better than ordinary passengers,” he said. “Also many people are not aware that there are some distinctive features in plate numbers of taxis belonging to Shanghai’s leading taxi companies.”

Song said some fake taxis use copied plates of authentic ones, but others simply sport plates stolen from real taxis.

Colleagues of Song have been injured when stopping suspicious taxis. “About 80 percent of fake taxi drivers have a criminal history and are quite defensive against the police,” he said.

In one case in July, police managed to stop an escaping fake taxi by using spikes placed on the ground that burst the tires and forced the driver to stop.

“I often approach a suspicious illegal taxi driver asking him to check a broken light or a flat tire, and as he gets out of the car, I pull the key out of his car so as to prevent him from running away,” Song said.

Police advise people to avoid taking taxis that look old and dirty and whose drivers are not wearing uniforms because these are signs the taxis are likely to be illegal.

Police also warn people not to hail taxis on Pudong's Shendi Ring Road where cars are not allowed to stop but fake taxis often cruise along the road seeking passengers.

People who suspect that they have taken a fake taxi can  call 12345 and they need to supply the plate number and route taken.

Police pledge to keep up their efforts as the number of tourists at Shanghai Disney Resort is expected to surge around next month's National Day holiday — an irresistible time of year for the cowboy operators.