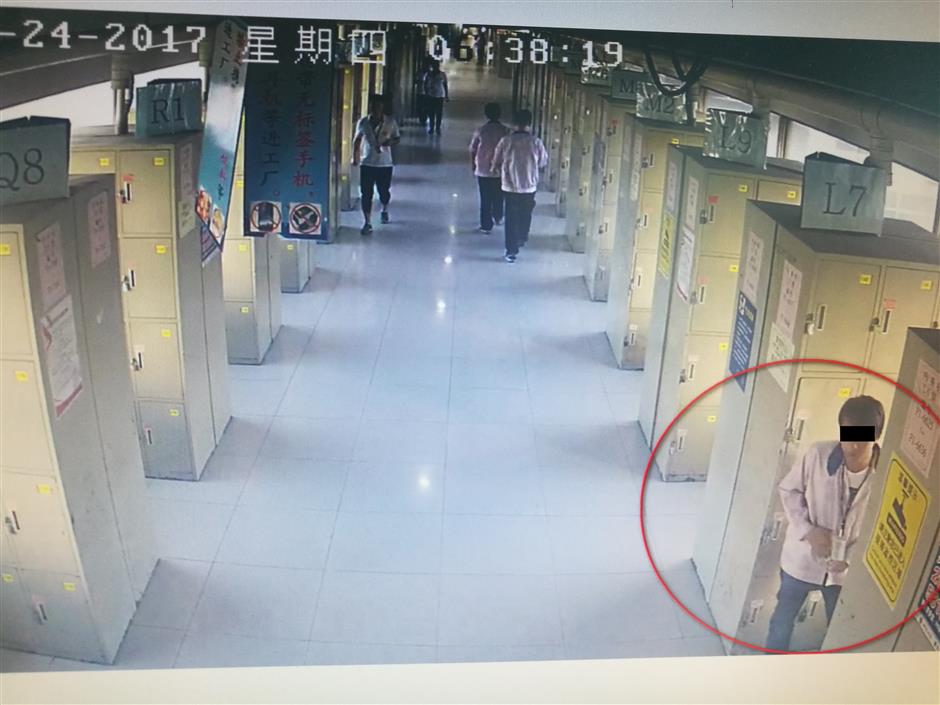 A 29-year-old man has been detained for allegedly stealing at least eight phones from workers in a phone factory where he was a previous employee, Shanghai police said on Tuesday.

The suspect, surnamed Wu, also managed to steal over 20,000 yuan (US$3,040) from Alipay and QQ Wallet accounts on two of the phones, police said.

The thefts took place at Pegatron, a large electronics manufacturer based in Kangqiao Town, Pudong in July and August.

After resigning from the factory where he had worked about 40 days, the suspect allegedly used an employee card he stole from a co-worker to take shuttle buses to the factory in the morning and steal from the workers’ locker rooms.

The factory requires all of its workers to lock their cell phones in the locker rooms before they start work.

“The suspect stole from the factory’s new locker rooms where not enough surveillance cameras had been installed yet and took advantage of the time of shifts when a large number of workers were coming and going and few would notice him,” said Gu Bin, a police officer from Hengmian Police Station who handled the case.

Wu was caught at the end of last month and has owned up to having committed the thefts.

In this case, the greatest loss affected a person who claimed that over 17,000 yuan was taken from his Alipay and QQ Wallet accounts.

“The suspect found the person’s pictures of his bank card and identity card and with data on the cards logged onto the accounts, transferred money and made payments,” Gu said.

Gu reminds people to delete bank card and identity card pictures from their phones, set up lock screen passwords to reduce their loss and report the loss of SIM cards immediately after a phone theft to reduce risk as much as possible.