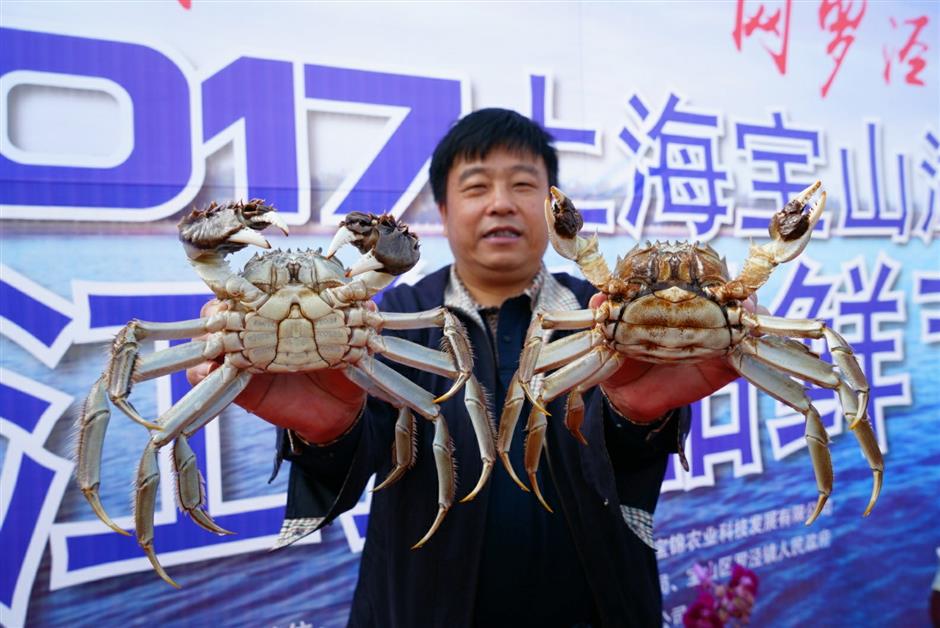 A villager in Luojing Town in Baoshan shows two of the biggest hairy crabs from the first harvest batch. The male crab weighs 390 grams, while the female came in at 305 grams.

Fishing started over the weekend on locally produced hairy crabs to compete with those from the famed Yangcheng Lake in Jiangsu Province and elsewhere.

Crab lovers will be able to taste the local flavor of the seasonal feast soon without driving out of Shanghai, with the crab meat described as being "sweeter and tighter."

Villagers from Luojing Town, the city's major agricultural base in the northern district of Baoshan, began catching the town's prized Yangtze River hairy crabs from ponds and rice fields on Saturday.

The town held a crab fishing competition on Saturday to mark the beginning of its annual crab harvest season. The competition encourages villagers to fish the crabs using their hands and bamboo baskets — the town's  traditional method for catching them.

"We often caught hairy crabs with hands from ponds in childhood rather than using fishnets," said a villager Chen Yongfa, 60, who won the competition by catching 64 crabs with his bare hands in 20 minutes. "Nets hamper the growth of the crabs and make the meat loose," he said. 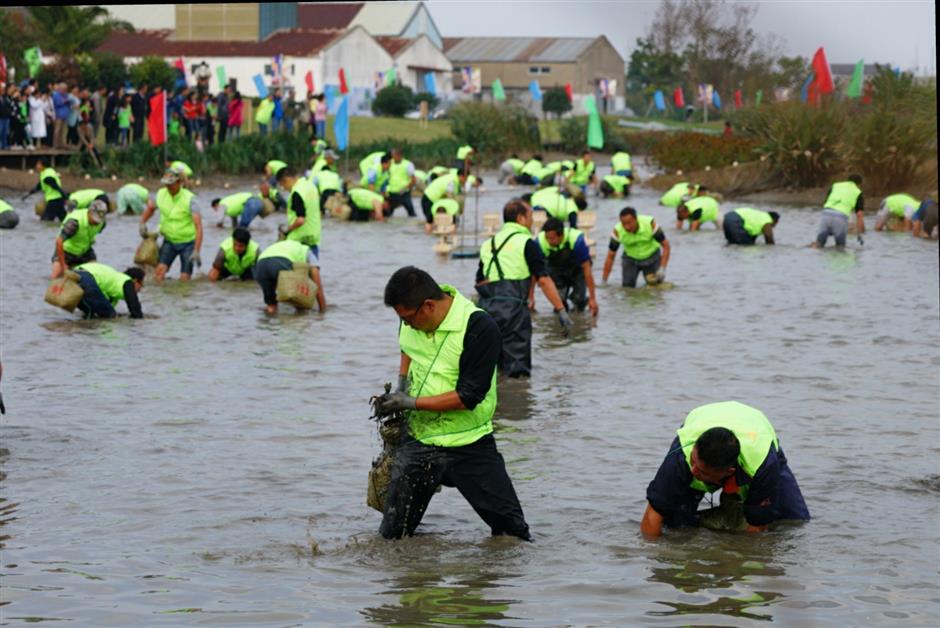 Villagers are encouraged to fish for crabs using their hands and bamboo baskets.

Yangtze River hairy crabs differ from those found in lakes and other rivers, according to the town, and they grow within the city's tap water source conservation at the mouth of Yangtze. The crabs spawn there every October and villagers catch the big baby crabs to raise them in ponds and rice fields.

It usually takes two years, twice as long as for other hairy crabs, for them to fully grow and be entered into the market, said Gu Jun, the Party secretary of the town. Yangtze River crabs are fed with fresh snails, weeds, corn, fish and beans, Gu added.

By raising the crabs in rice fields, their excrement provides ideal fertilizer for the rice, while weeds from the fields offer food for the crabs, said Wang Yiyu, director of the agriculture service center with the town. Farmers cannot use any chemical fertilizer because doing so would kill the crabs, he added.

The biggest male crab in the first batch to be harvested weighed 390 grams, while the "queen crab" weighed 305 grams.

The crab rearing and harvesting are part of the town’s efforts to develop tourism to attract downtown residents. The town wants to bring in visitors to enjoy its farmland scenery, taste and even catch the hairy crabs and witness how much of the city’s agricultural goods are produced in the town, said Yang. 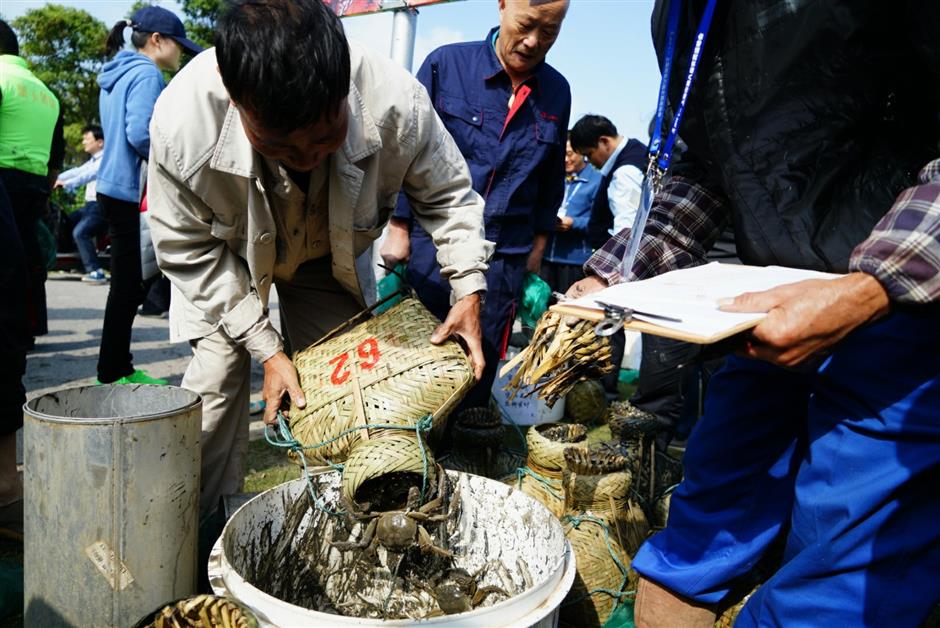 Meanwhile, farmers in Songjiang District over the weekend began spreading their nets and harvesting the first of their autumn’s crop of crabs.

Huangpu River hairy crabs, which originate from the source of the city's "mother river" are featured by their green backs, white bellies, golden pincers and yellow hair, said Wang Chenghui, a hairy crab expert and professor with the Shanghai Ocean University.

Before water from a protection zone of the Huangpu River is channeled into the crab grounds, it is purified twice to lower its content of nitrogen and phosphorus, Wang said.

The price for a locally produced Huangpu River hairy crab weighing about 200 grams is approximately 60 yuan (US$9) on average, compared with 75 yuan for those from Yangcheng Lake. 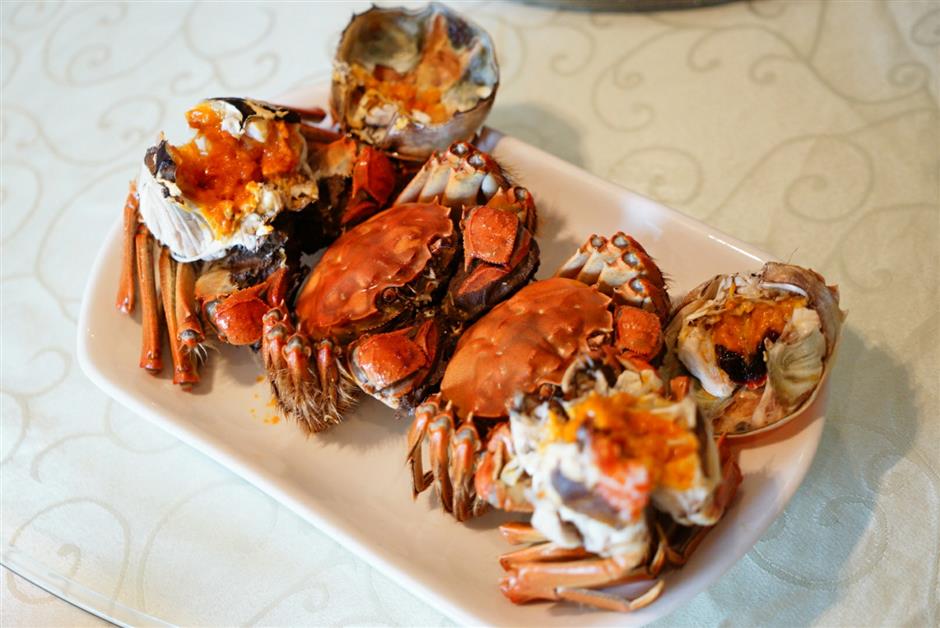 Shanghai has long been China's biggest consumer market for hairy crabs due to the special local enthusiasm for the delicacy. Shanghai residents consume over 80,000 tons, or 400 million hairy crabs, annually, accounting for 10 percent of the nation's total consumption.

Though local production has increased in recent years to meet the huge demand, most hairy crabs on local tables come from neighboring Jiangsu Province as well as east China's Jiangxi, Anhui, Shandong and central Hunan and Hubei provinces.