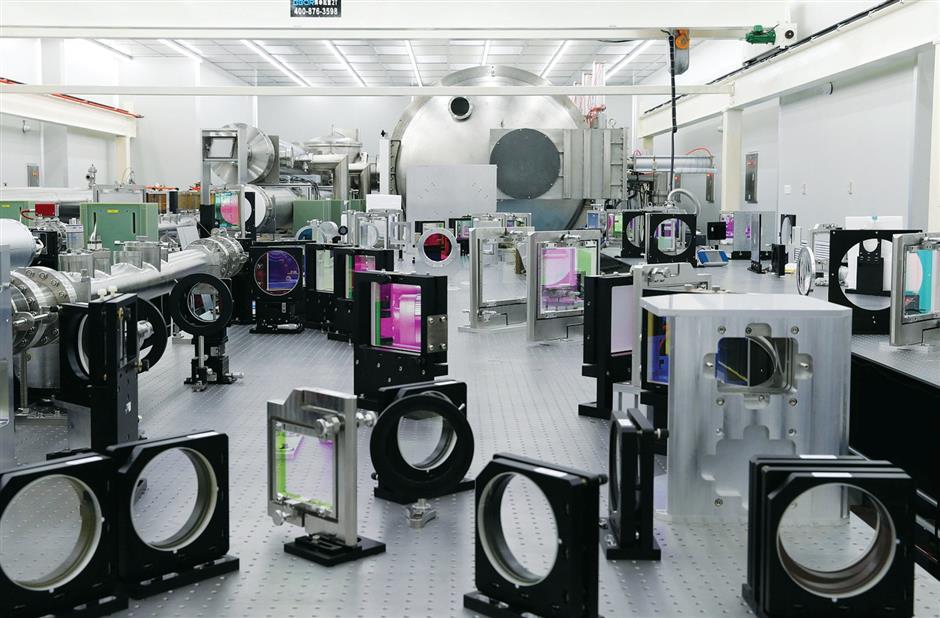 The super laser device at the lab jointly established by the Shanghai Institute of Optics and Fine Mechanics of the Chinese Academy of Sciences and ShanghaiTech University.

A Pudong-based based super laser machine has set a world record by amplifying and outputting 10-petawatt lasers.

One petawatt equals to 1 quadrillion watts which is about 50,000 times the planet’s total power consumption — in an extremely short time. Experts said the new progress in laser technology can be projected to research covering fields such as astrophysics, nuclear medicine, nuclear physics and material science.

The machine, called Shanghai Superintense-Ultrafast Lasers Facility, is developed in an ultra-intense laser laboratory jointly established by the Shanghai Institute of Optics and Fine Mechanics of the Chinese Academy of Sciences and ShanghaiTech University.

Superintense ultrafast lasers, also referred to as the brightest light known to a human, are capable of creating extreme physical conditions that rarely exist in the universe, such as existing inside a star or at the edge of a black hole.

“With the laser beams we can create such extreme environments in a controllable scale within a laboratory, and help scientists in producing a hyperfast X-ray source, finding new materials under extreme conditions and even detecting dark matter,” said Leng Yuxin, head of the laboratory.

The laser machine facility, as well as the lab, is in ShanghaiTech University as one of the core research platforms in Shanghai Zhangjiang High-Tech Park. The achievement can be used to develop electron accelerators and ultra-fast X-Ray sources, which can detect the image of an atomic motion in protein to reveal the mystery of life.

The machine may also lead to new discoveries that can help scientists tackle many unsolved mysteries of the universe, from its origin to quantum mechanics.

Scientists only got a glimpse of this strange phenomenon recently by observing neutron stars. These are the dense remnant cores of massive stars that have at least 10 times more mass and stronger magnetic fields than the sun by billions. But these stars are often light years away, making them extremely hard to study accurately.

“Now for the first time, we can directly create and then measure the quantum properties of vacuum on earth using the laser,” said Li Ruxin, director of SIOM.

Apart from cutting-edge scientific research, the laser will have plenty of practical applications.

“By simulating extreme conditions via lasers, scientists can test and create stronger and more durable materials for industrial and social needs,” he said.

Applications of the lasers also include making an impressive advancement in the running speed of smartphones.

“High-power lasers are one of the greatest tools in modern science,” Li said, adding that several other countries are reportedly investing heavily to develop similar facilities, resulting in fierce competition in scientific research.

The United States, Russia and Japan even proposed the research concept of developing a hundred-petawatt SULF. The United Kingdom, France, Germany and Canada also have their own intense laser facilities.

While these lasers have immense power output, the energy they deliver is actually low, Li said.

The SULF had already recorded a breakthrough last August when it created then world’s most powerful pulsed lasers — intense lasers that generate beams in extremely short bursts — clocking in at 5.3 petawatts in less than 30 quadrillionths of a second.

The project’s three platforms, to serve interdisciplinary application in material science and life science, are expected to be put into operation in late 2018. They will be made available to research institutions and innovative companies around the world.