Shanghai police said on Wednesday that they had seized over 14,000 bottles of counterfeit wine and arrested six people.

The six are accused of producing and selling fake wine on the Internet purporting to be Penfolds wine, a well-known Australian brand.

The alcohol was seized in a raid on three warehouses in Shanghai and Xiamen of Fujian Province. Police said the fake wine bottles could have fetched up to 10 million yuan (US$1.5 million), according to their price tags. 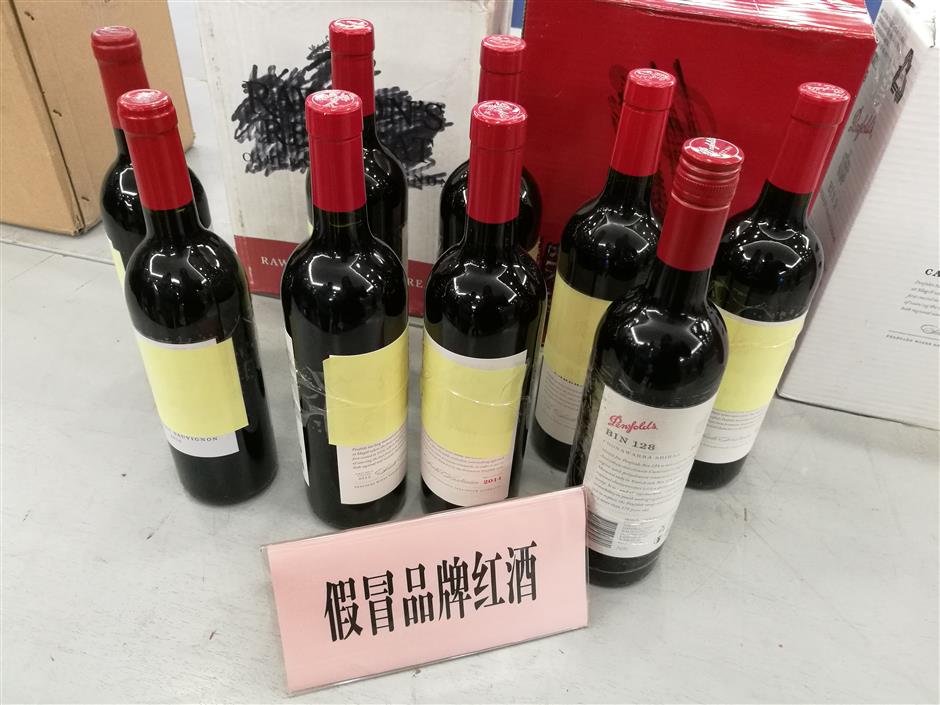 Some samples of the fake wine are put on display by the police on Wednesday.

Police in Hongkou District started investigation in mid-August after the online giant Alibaba reported suspicions the wine might be fake.

The Australian wine, which was allegedly sold at a third of its market price, was identified as counterfeit by Penfolds, police said.

“A bottle of 750ml was sold at about 200 yuan, while the market price of the authentic wine is 600 yuan,” said Xie Yijun, an officer with Hongkou police who was in charge of the case.

Xie said tests showed that the fake wine was not harmful to health, but was of inferior quality.

From May to August, over 1.2 million yuan of the fake wine had been sold at the Internet wine shop, police said.

Over 2,000 bottles of the fake wine were discovered in a warehouse in Songjiang District, Shanghai, with six suspects held including a man surnamed Dai, who allegedly imported the counterfeit alcohol from a man surnamed Su based in Xiamen.

Police caught Su and another suspect in Xiamen and said they had found over 10,000 bottles of fake wine and over 10,000 forged wine labels in two warehouses there.

Four suspects who allegedly bought the wine from Dai and sold it on were later caught in Songjiang District.

Su has been selling the wine to Dai since 2016 at a tenth of the market price of the authentic wine, police said, adding that all the fake wine was bottled in China.

The wine was mostly sold to bars, discos and KTVs, according to the police.