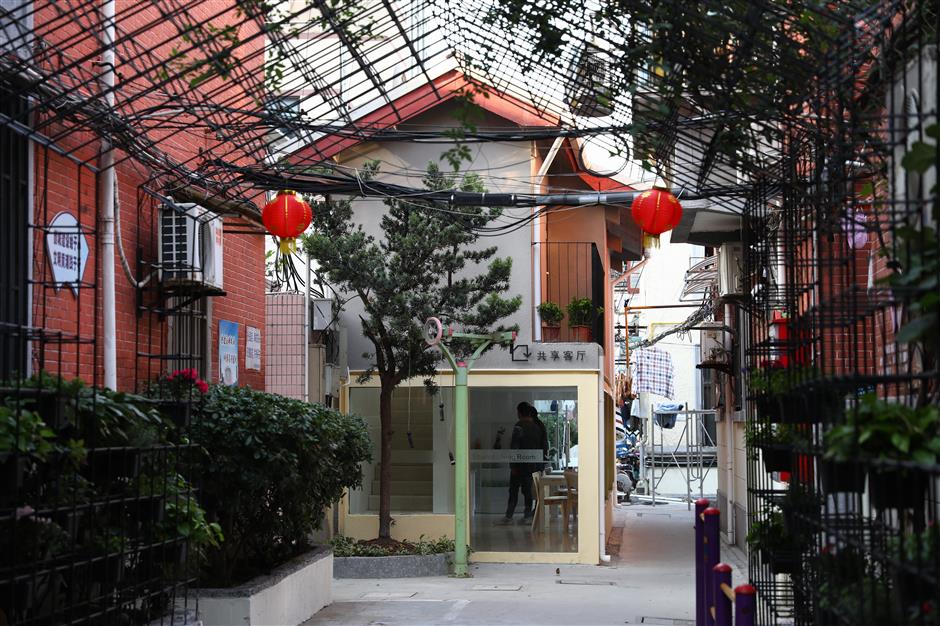 A “shared living room” stands in the middle of the 1920s-built Guizhouxi Community in Huangpu District. Residents with limited living space can cook in public kitchens with full facilities, meet friends or attend festival occasions at public living rooms.

Downtown districts have begun trial efforts to expand living and activity space for residents in old communities by setting up communal houses and facilities.

Residents in some old neighborhoods with limited living space can now cook in larger public kitchens with full facilities, meet friends or hold and attend festival occasions at public living rooms, as well as read books or try their hand at designing their own artworks.

The first such “shared living room” has been completed in the Guizhouxi Community near Nanjing Road E. in Huangpu District as a demonstration for other lane-style neighborhoods.

The two-story house renovated from the former community activity center includes shared kitchen facilities, living and study rooms that residents can make reservations to use. 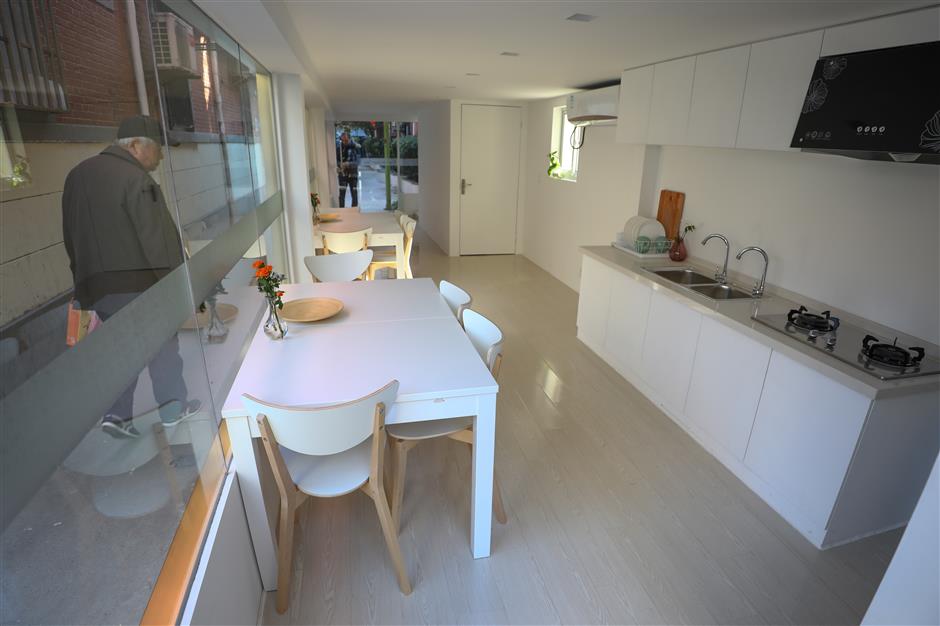 A resident checks out the newly built “shared living room” in the Guizhouxi Community that is expected to open next month.

"I can invite my old friends to have meals now," said a resident surnamed Huang. He said he has had to refuse visiting requests from friends in the past because his 30-square-meter apartment is too small for a social gathering.

A nearby public laundry house, with five tumbler washing machines, has also been finished for residents to use.

In Yangpu District, a line of former small eateries and nail saloons on Tieling Road have been converted into designing studios, museums and public classes where residents can listen to lectures and watch the artworks and designing process of professors and students from the nearby College of Design and Innovation of Tongji University.

These are part of the city's planning authority's micro-revamping campaigns on local old communities to improve living standards while still retaining the traditional layout and lifestyle of the city's lane-style neighborhoods. 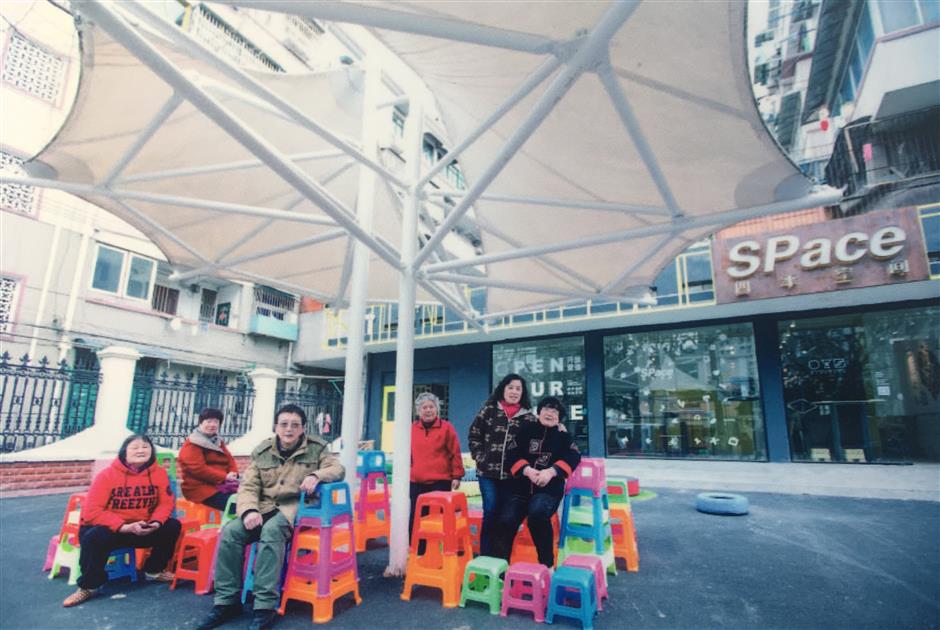 Residents sit in a public square renovated by the College of Design and Innovation of Tongji University on Tieling Road in Yangpu District.

The college has moved part of the teaching and research sites to the New Center of Contemporary Jewelry and Fashion Culture within the community in a trial practice named Open Your Space.

The project was showcased at a research project road show of local universities' designing majors on Thursday. Nearly 100 such innovative projects on transport, urban life and high technologies were displayed. 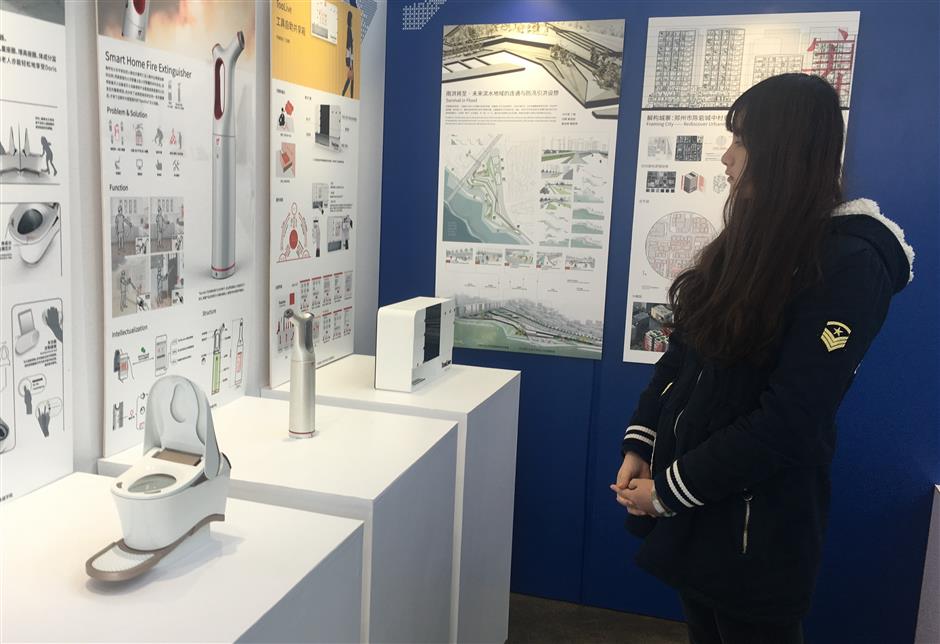 A student studies exhibits at the research project road show of the designing majors of local universities at the College of Design and Innovation of Tongji University. 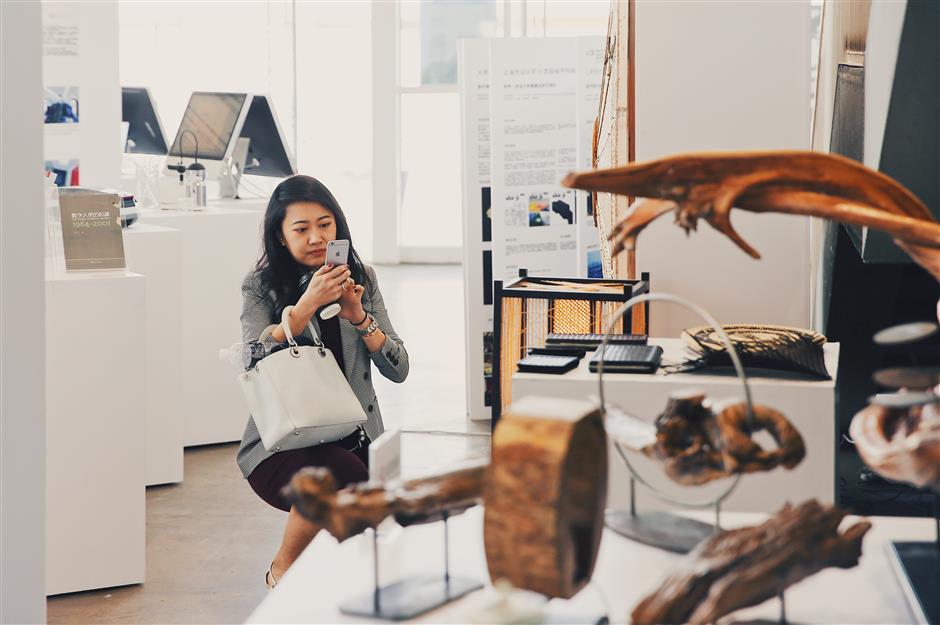 A visitor attends the research project road show of the designing majors of local universities at the College of Design and Innovation of Tongji University.

The site of the fashion center was once occupied by wanton and hotpot restaurants. Residents had long complained about the noise and smoke, said Du Juan, director with the Siping Road Subdistrict. The authority later recovered the site and handed it over to the college to prepare an innovative renovation.

"The 150-square-meter building was too small for a community center, and the subdistrict officials could not find any other use of the vacated place," Du said.

Designers and students from the college also decorated the surrounding areas such as the rubbish site, manholes, walls, greenery belts and telephone booths to make the area an attractive public space for the residents.

The telephone booth, for instance, is now a mobile phone charging station.

The renovations practice between subdistrict and college will be replicated elsewhere

A nearby abandoned waste recycling site at 200 Fuxin Road will be turned into an innovative lab named "living lab." The college will join hands with the Massachusetts Institute of Technology to work out more ways to take more "micro-surgery" on traditional neighborhoods, according to the College of Design and Innovation.