A batch of creative artworks and designs from local citizens, selected from a citywide competition, are being exhibited in Putuo District, as part of the annual citizen culture festival.

The artworks include a painting made up of grains and cereals, a sculpture created with abandoned stationery, as well as creative designs such as a chandelier showing temperature and a “foldable bathroom.” They are being exhibited on the ground floor of Putuo District Culture Center through until January 9.

The competition, themed on “Creativity Enlightens Life,” was co-organized by the district culture bureau, Shanghai Oil Painting and Sculpture Institute, Shanghai Design Association and Shanghai Mass Art Center. It aims to encourage local folk artists and promote tradition arts with creativity and innovation, according to the organizer.

Since its launch in March, the competition has collected over 1,000 pieces of works, including graphic designs, science and technology products, art installations, paintings, sculptures and handicrafts.

The organizing committee also allowed netizens to pick the most popular artwork through a poll on the WeChat platform.

The public vote attracted more than 133 million participants with 270,000 votes within the first week.

The winning artworks and some outstanding works from the contest are on display at the Urban Creative Space of the center. They are separated in six themes — creativity, intelligence, change, excellence, enjoyment and fun — in a bid to inspiring people’s creativity and discovering the beauty of life.

One of the winners, students with the Shanghai Wusong Middle School, incorporated the traditional dyeing of cloth from China’s ethnic minority with LED lamps. Their counterparts from the Baoshan Experimental School jointly created a huge painting, “Pay tribute to Paul Klee,” with discarded stationery from their school mates. The artwork aims to imitate the abstract artistic style of German painter Paul Klee (1879-1940) with recycled pens and rubbers. 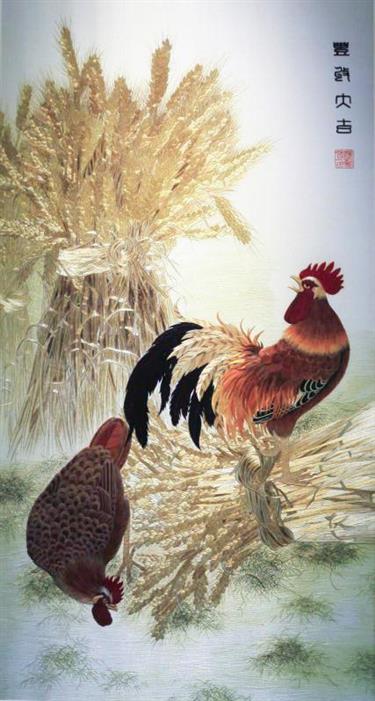 An award winning painting created by Yao Yijia features the theme of a bumper year. The painting is made up of grains and cereals.