Master plan for our global city

Shanghai officially released a detailed master plan yesterday to build itself into an “excellent global city” by 2035 — three weeks after it received the central government’s go-ahead.

The 2017-2035 blueprint is the third of its kind to be approved by the State Council and is described as being entirely consistent with the earlier released 1999-2020 development plan.

The latest plan reflects new requirements by the central government as well as new expectations from city residents amid changing scenarios both at home and abroad, Shanghai Vice Mayor Shi Guanghui told a press conference.

On December 15, the State Council approved in principle the city’s master development plan through 2035, which has set a target to transform Shanghai into an innovative, humanistic and eco-friendly metropolis with global influence.

According to the plan, which also encompasses a longer-term vision through 2050, Shanghai has been positioned as the core city in the Yangtze River Delta urban clusters, an international economic, financial, trade and shipping center, a technology and innovation center as well as an international cultural metropolis.

To achieve these targets, the city will explore new growth models that are suitable for sustainable development in densely populated megacities and will take measures to control construction and population growth, protect the environment and create a safe and friendly metropolis for people to reside. 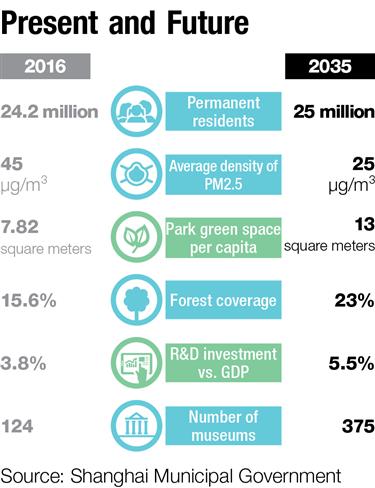 The total land area allocated for construction will be limited to 3,200 square kilometers, which represents a negative growth, according to the plan.

To better serve the Belt and Road initiative as well as the Yangtze River Economic Belt strategy, Shanghai will make proactive efforts in promoting development in great synergy with neighboring cities to build the Shanghai area into a world-class urban cluster.

Meanwhile, the city will boost its urban and rural development under a new framework that mainly consists of one core area (central parts of the city), two axes (Huangpu River and Yan’an Road-Century Avenue), and four supportive wings (Hongqiao, Chuansha, Baoshan and Minhang). 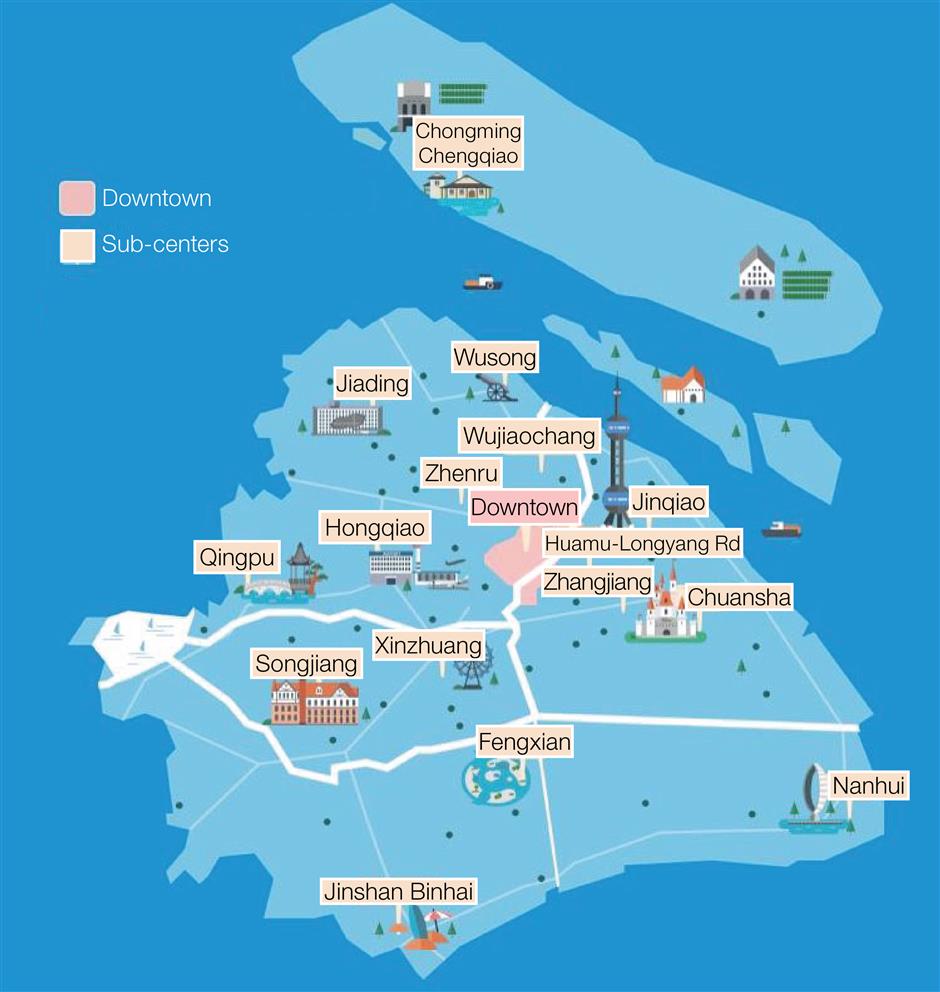 The city aims to develop itself into a technology and innovation center with global influence, with the Zhangjiang national science center playing a core role while Pudong, Hongqiao and Yangshan Deep-Water Port will all be built into international hubs.

To further strengthen its public transport network, the city plans to have about a 1,000-kilometer (currently 666km) Metro system and 1,000km of intercity railways by 2035. Almost every new town with a population of more than 100,000 people will be covered by the rail transit system.

To improve liveability, about 99 percent of community-level public service facilities will be reached by residents within a 15-minute walk.

The city will also accelerate its pace in building a housing system that encourages both house purchases and renting. More efforts will be made to ensure rental supply from multiple sources.

From July to December, the city added a total of around 41,000 rental units in supply, including 30,000 apartments to be built on 29 land parcels sold during the six-month period designated solely for residential leasing purposes, according to Xu Yisong, director of the Shanghai Planning, Land and Resources Administration.

More public open spaces, such as squares and parks, will be provided in the city, and high-quality cultural, educational, sports and wellness facilities will be built. At least one university or college will be located in each new town and sub-center, while every new town should have at least one city-level hospital.

To make the city more ecologically sustainable, forest coverage will rise to 23 percent, and there will be more than 13 square meters of public parks or green land for each resident on average by 2035, according to the plan. A green, low-carbon development model will be fostered to reduce carbon-emission levels and more endeavors will be made to protect the ocean, air, water and soil.

By 2035, average density of PM2.5 — hazardous fine particle air pollution — will be limited to about 25 micrograms per cubic meter, the plan said.