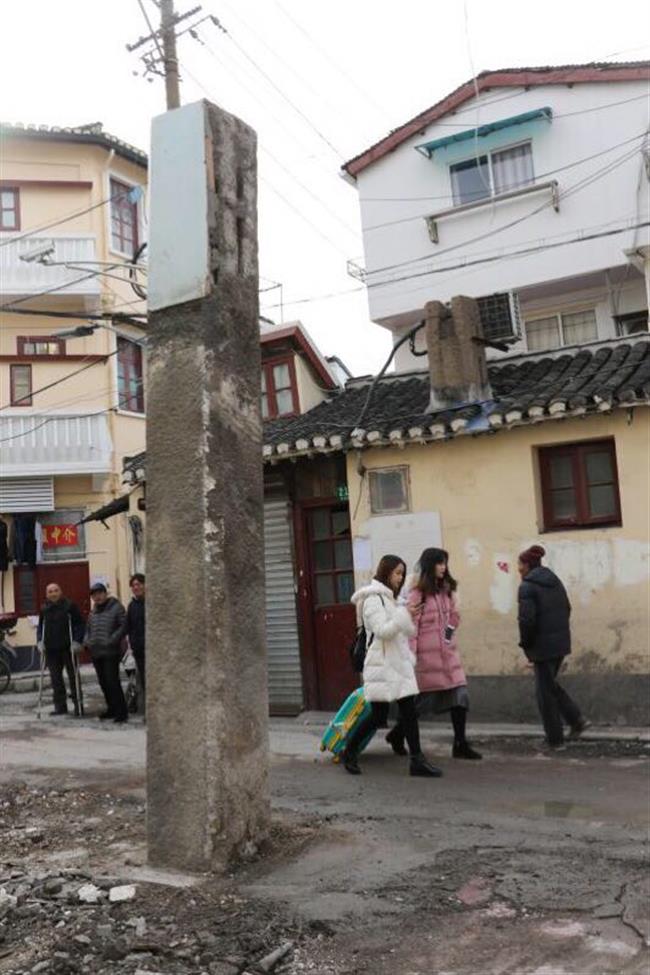 One of the two pillars stands on Guangqi Road S. The pillars are believed to be the relics of Gelaofang, the memorial archway of Xu Guangqi, or the Taiqingfang, where Xu was born, says Xue Liyong, a famous local historian.

Two historic stone pillars have been discovered in downtown, which could be part of a freestanding gateway built some 300 years ago in memory of Xu Guangqi, a Ming Dynasty (1368-1644) scientist and official after whom Xujiahui is named.

Cultural heritage authority and scholars have carried out further studies on the 5-meter-tall standing granite pillars that were discovered during an ongoing road expansion project on Guangqi Road S., one of the oldest streets in Shanghai’s Laochengxiang, or Old Town, in Huangpu District.

Both pillars have been put under protection since preliminary evaluation found they are supportive pillars of an ancient freestanding gateway, said an official with the district’s heritage protection authority. Details on their age and history are still under investigation, the official added.

“The pillars could be the biggest discovery on cultural relics of the city,” said Wang Yi, a researcher with the Shanghai History Museum, who has evaluated them on site.

The two pillars should be the relics of Gelaofang, the memorial archway of Xu Guangqi, or the Taiqingfang, where Xu was born, said Xue Liyong, a local historian and a senior researcher with the museum.

Xu translated and introduced Western science books to China between the 16th and 17th centuries and pioneered a series of scientific innovations. 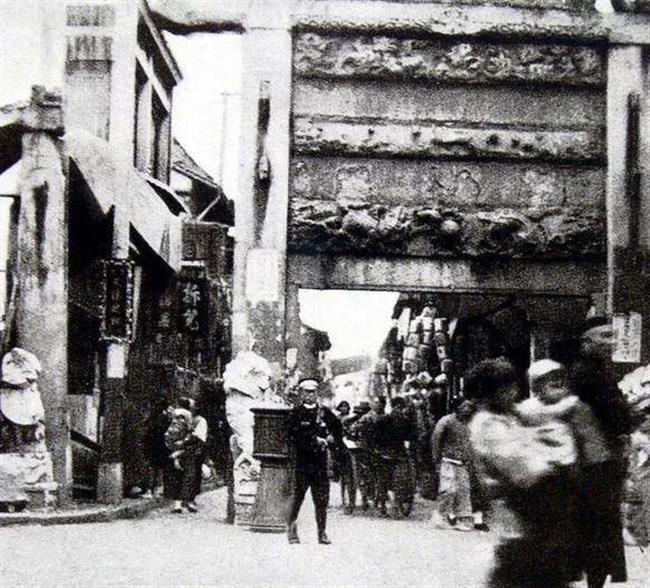 A historical photo of Gelaofang, the memorial archway of Xu Guangqi.

Gelao, or top officials of the Cabinet in Ming Dynasty, is an honorific title of Xu. Construction started in 1634 on the stone gateway after the death of Xu in memory of his achievements, but was suspended after the Ming Dynasty was replaced by the Qing Dynasty.

However, the Qing government resumed the construction after 1662 to win people’s support, according to historical documents.

The Gelaofang archway was said to be demolished in 1933 when the then city government started building the Guangqi Road to commemorate the 300 anniversary of Xu’s death.

“However, the pillars survived to date,” Xue added. 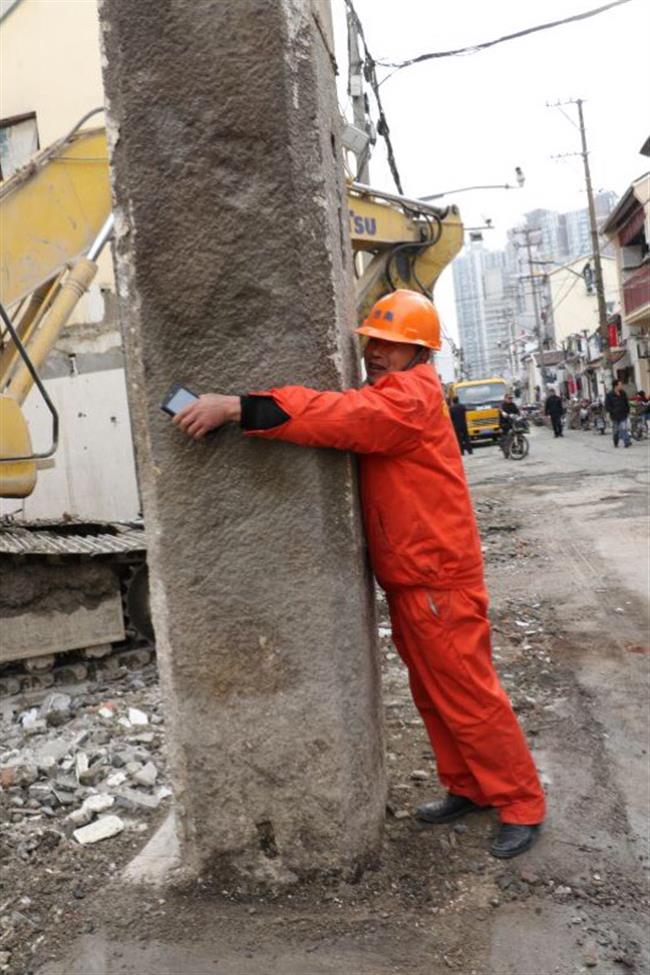 A construction worker tries to size up the historic pillar on Guangxi Road S. in Huangpu District.

The large pillars stand about four meters from each other on both sides of the Guangqi Road S. They were previously surrounded by old residential buildings along the road as part of the building structures, according to a resident living nearby.

The pillars were subjected to mortises required for the construction of the gateway structure. They were also painted in blue color by the owners of the buildings which housed the pillars.

“Both pillars were completely surrounded by the old houses. An air-conditioner was even built on top of one of the pillars,” the resident said. They were discovered after the houses in shabby conditions were demolished for the expansion of the road.

Xue said the pillars could also belong to the Taiqingfang, an even older freestanding gateway built during Ming Dynasty in Xu’s ancestral house. Xu was born in that house in April 1562.

“No matter which gateway the pillars belong to, they should be treated as invaluable cultural relics in the history of the city,” the official said. The cultural heritage authority will work with local subdistricts and experts to decide how to proceed with these cultural relics. 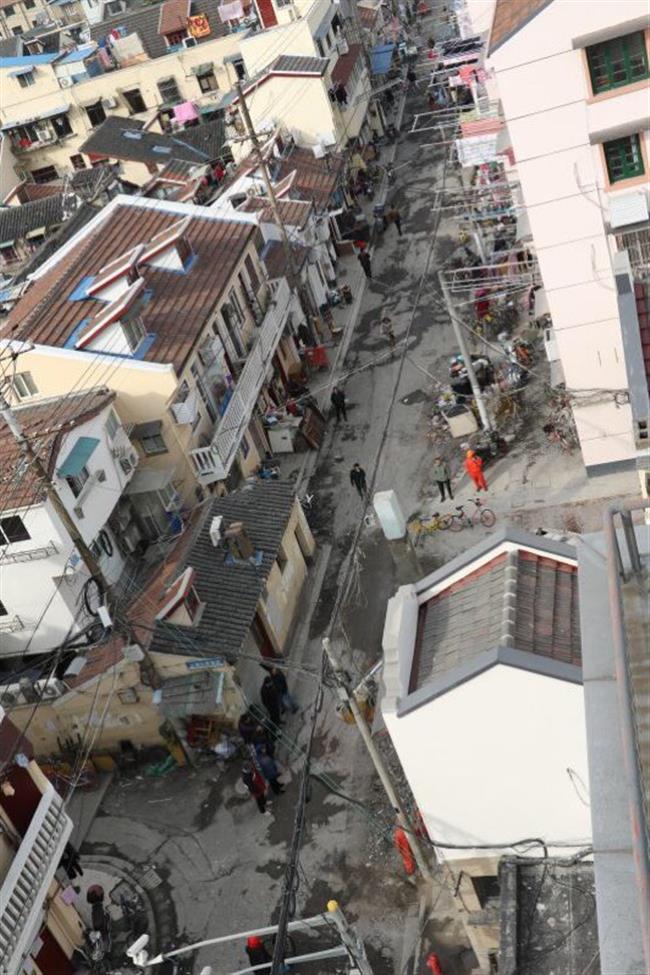 A bird's eye view of the two historic pillars, with one of which still remains wrapped in an old residential house on Guangqi Road S.