A one-time garbage disposal area at the Knowledge and Innovation Community in Yangpu District was the site of happy reapers last autumn after the strip of land between two housing complexes was turned into a 2,000 square-meter vegetable garden.

“After my daughter was born, I wanted to do something to bring urban life closer to nature,” said Wei Min, an architect and council member at Clover Nature School that designed the garden. “I wanted a place where she could have fun and learn to share nice things with others.”

At the end of October, children in the community indeed came together in the veggie patch to share an outdoor experience. They harvested and threshed rice – half the crop went into steamed rice balls, half to the birds. 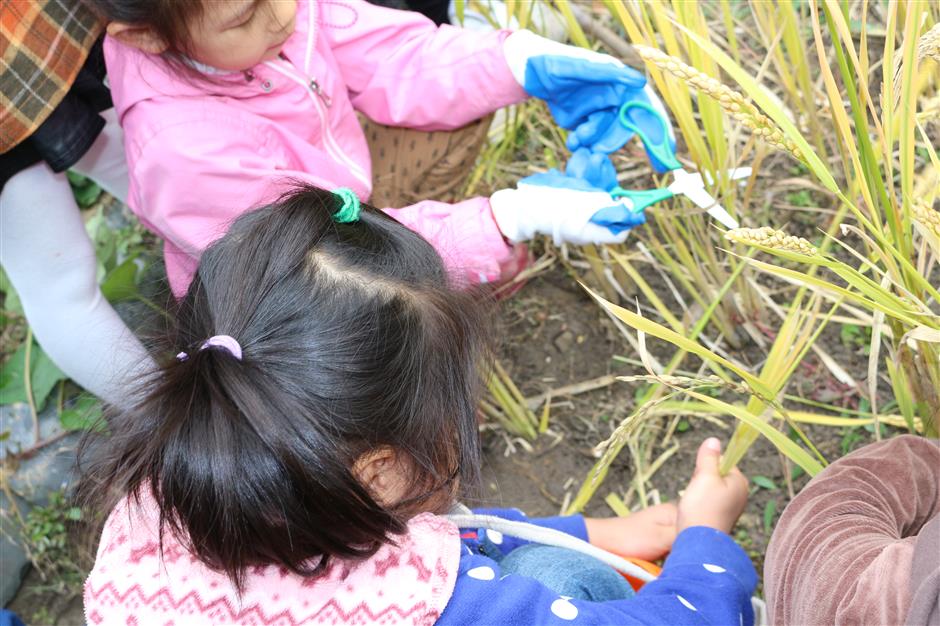 Children trim the leaves of rice crops at the vegetable garden at the Knowledge and Innovation Community in a community event held at the end of October last year.

Then the 20-square-meter rice paddy was planted with broad beans for early spring harvest.

The garden is organic, with community kitchen waste recycled for fertilizer. The result is an enclave of biodiversity where more than 30 kinds of insects have been identified.

Residents and visitors alike enjoy and admire the garden.

“When you no longer see red dragonflies in the pond of fleur-de-lis, you start to lament that summer is gone,” Wei said of the changing seasons that a garden reflects.

She and her team have created about 30 “edible gardens” like this one around Shanghai, mostly in residential communities. 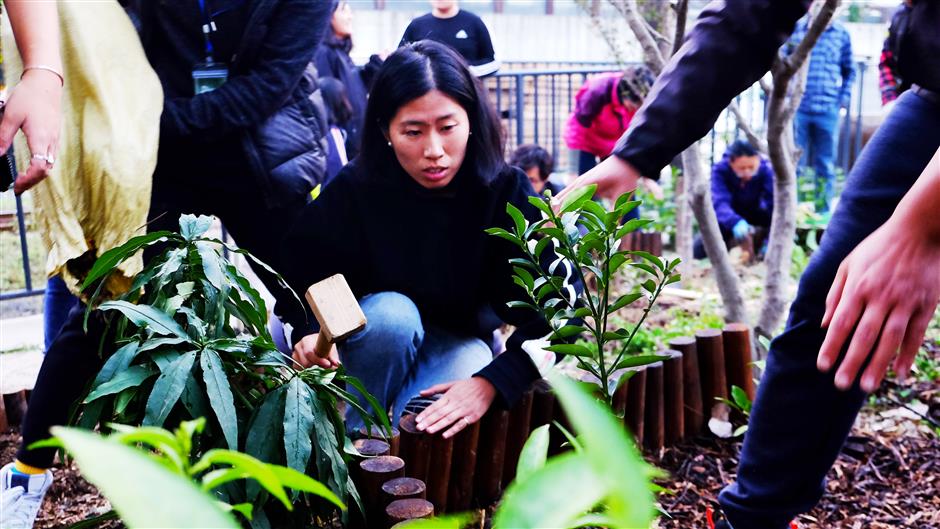 A training session held by Clove Nature School, in cooperation with Shanghai Roots & Shoots, brought architects, environmental designers and plant enthusiasts to the Elite Valley Nature Line Park, one of its largest vegetable gardens in Shanghai, in November last year.

More than just a boost to the environment, the gardens provide an elixir of community spirit.

Another Yangpu garden called Baicaoyuan, or literally “herbal garden,” is a 200-square-meter green strip in the neighborhood’s central square.

Over 20 volunteers from the community plant cucumbers, pumpkins, aubergines, peppers and other vegetables in the springtime. They hold activities to attract residents, young and old, to the project.

One of the volunteers, 72-year-old He Yuwen, said two volunteers are on duty every day to water and weed the rows of vegetables.

“We are all plant enthusiasts, but previously we did that only at home,” he said. “Taking care of a public garden is more complicated because it involves collaboration.” 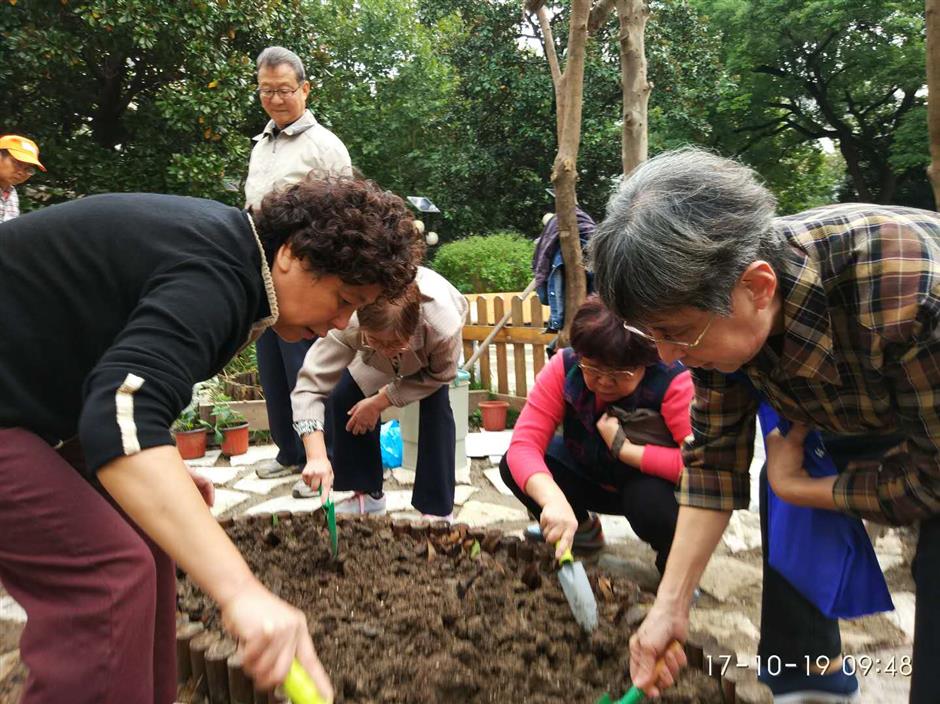 He said some residents have been known to pinch potatoes, kumquats, roses and even earth from the garden which is surrounded by only a 50-centimeter-tall fence. However, such incidents of petty vandalism have become fewer over time, he added.

In summer, butterflies flutter among the leafy greens and flower beds attract selfie-takers.

Li Qingpeng, executive director of Heshundadi Agritech Co, which specializes in sustainable agriculture and runs the garden designed by the Clove Nature School, said harvests are shared among residents.

“The hardest part in running a community garden is attracting enough resident participation to keep costs down,” he said.

One example is Meilong Sancun, a residential complex where an area once strewn with garbage was turned into a veggie patch.

In 2012, the residents received seedlings in yogurt Tetra Paks from the neighborhood committee in a go-green campaign. The campaign led to the creation of a 350-square-meter garden and adjacent greenhouse the next year. 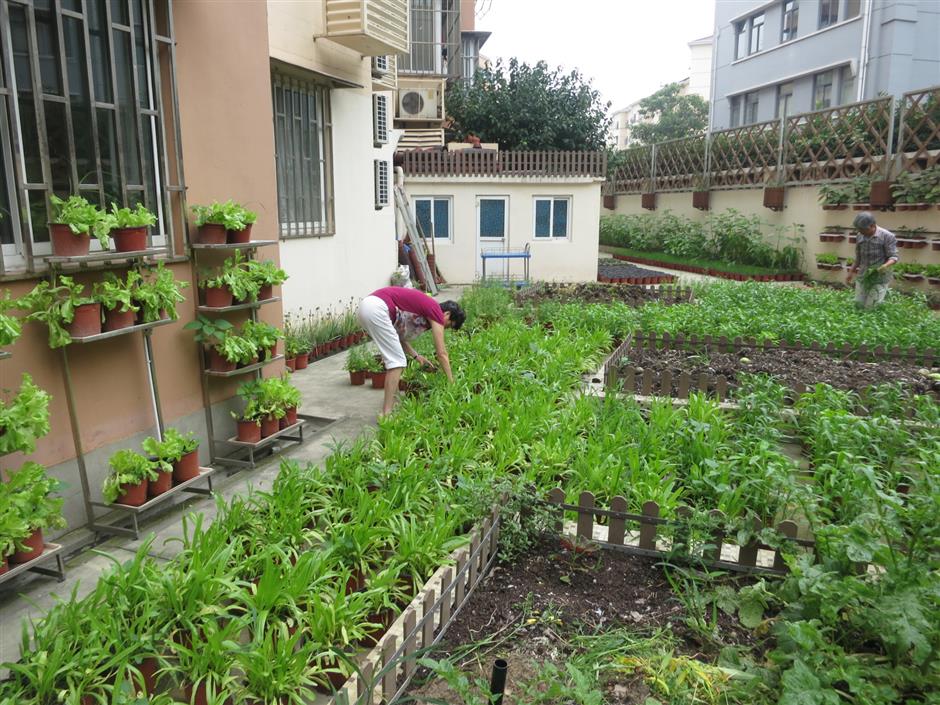 The vegetable garden at Meilong Sancun where plants were placed in dozens of "square foot gardens" which some residents asked to take home and grow them on their balconies. 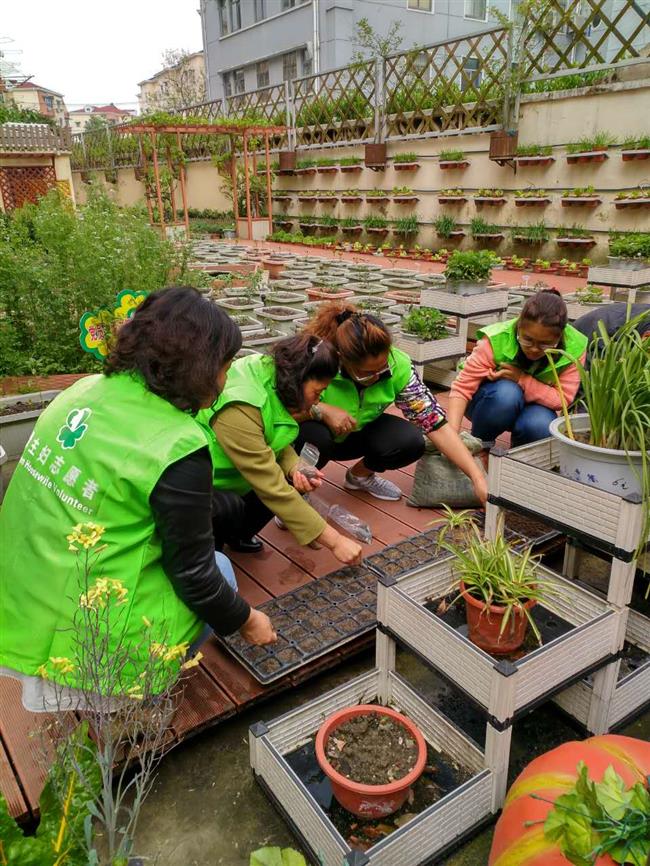 “This project was just a first step for us in making green culture a lifestyle,” said Chen Xinyin, head of the committee.

Meilong Sancun is now an exemplary neighborhood in terms of waste reduction and recycling. The green thumbs have even published a book on community plants and calendars on when to plant. Picture books encourage children to think about nature.

Just a few streets away, a vegetable garden at Hualiyuan – a converted garbage site inspired by the “Green Housewife” – recently doubled its space to about 200 square meters. 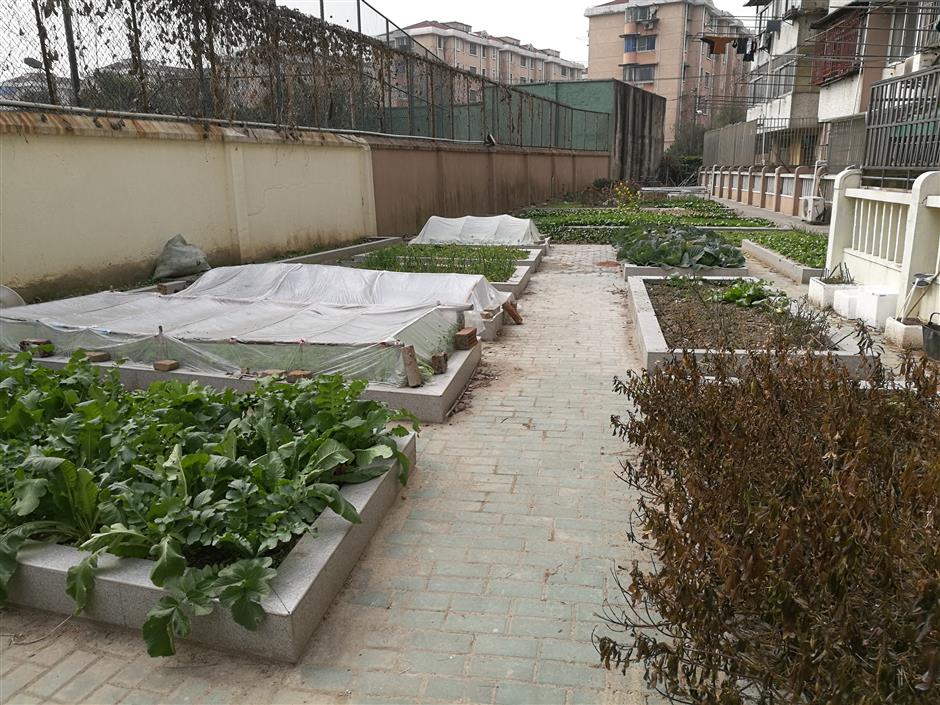 An area at the Hualiyuan community has been tranformed into a vegetable garden.

Cauliflower, oilseed rape and cabbage harvested from the garden are donated to needy residents in the neighborhood, including elderly who live alone, disabled people and couples who have lost an only child.

“A harvest of 1.5 kilograms of cauliflower might be consumed in a few meals, but the caring attitude toward residents carries on,” said Ma Duanna, head of the neighborhood committee.

Elsewhere in Shanghai, “edible gardens” have even taken over public spaces.

At the Century Park in Pudong, a 1,000-square-meter community garden area will reopen for public planting next month after renovation work is completed.