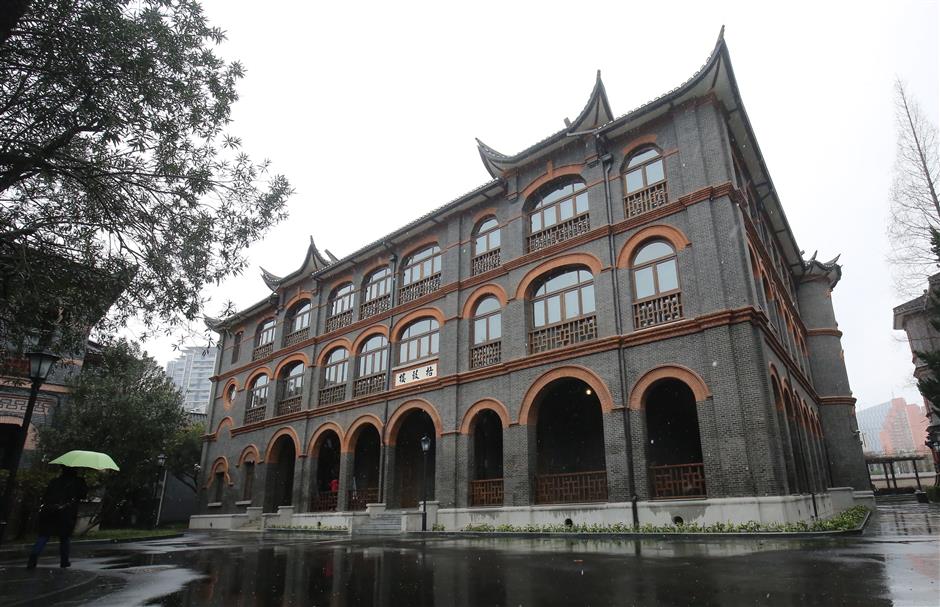 The renovated Gezhi Building, or Science Hall, is seen at East China University of Political Science and Law in Changning District. 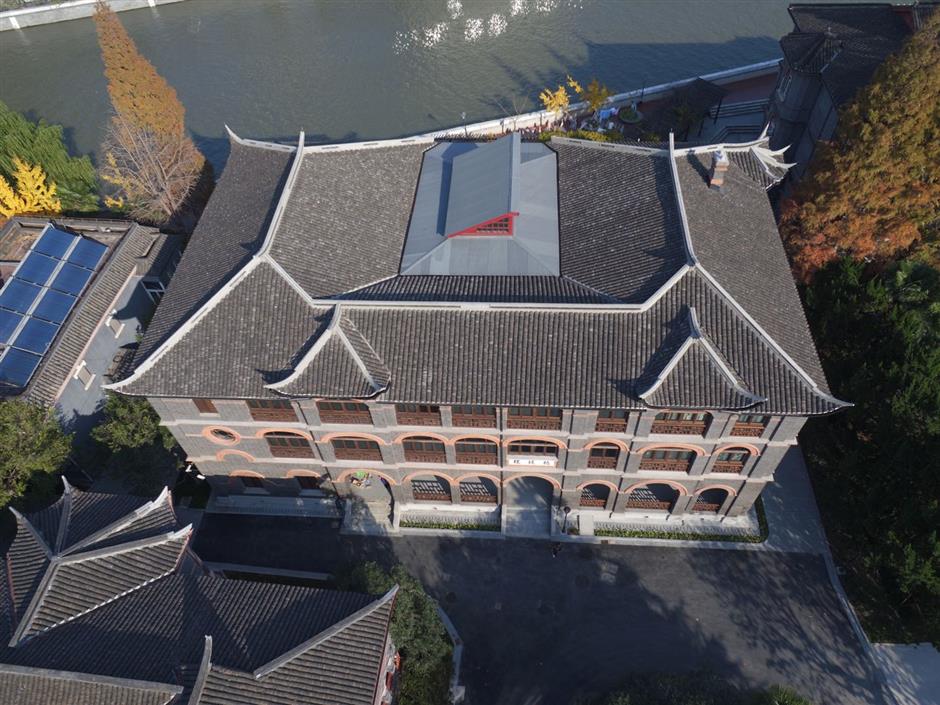 A 110-year-old building at a local university will be put into use soon after a renovation project.

The Gezhi Building, also known as Science Hall, on the campus of East China University of Political Science and Law in Changning District, was one of the first school buildings regarded as a cultural relic to be renovated.

According to the cultural relics protection law, the restoration of such buildings should not change their original.

Zhu Jun, director of the university’s infrastructure department, said the building will be used for high-end research.

Covering an area of 1,898 square meters, the three-floor brick and wood structure was built in 1899 on the site of a villa bought by the university in 1879 for Samuel Isaac Joseph Schereschewsky, founder of St Johns College and Anglican Bishop of Shanghai then, to work and live in.

The construction cost about US$30,000, half of which was raised by its president Francis Lister Hawks Pott in America while the rest was donated by local nobles, students and foreign businessmen.

Among its 60 rooms, those on the first and second floors were used as classrooms and physics laboratories and for theology students while those on the third floor were classrooms for medical students.

The college was one of the first schools in China to teach natural sciences and the building also hosted its science museum, thus the “Science Hall” name.

In 1952, the East China University of Political Science and Law was established on the site of St Johns College and the building was used as offices for its president, academic affairs and other departments.

It was changed into student dormitories in 1998 and renamed the Gezhi Building. The term Gezhi in Chinese means studying the nature of things.

It was registered by the government as an outstanding historical building in 1994 and confirmed as a cultural relic in 2014 together with some other buildings in the university as the “St Johns College historical architectural complex.”

That was when the university began its plan to repair these buildings comprehensively, rather than merely making small refinements as before.

Gezhi Building was the first chosen to be renovated. But the job was not easy as there were only several faded photos but no other details about the building. Even the name of the architect who had designed it could not be found.

“We have no original construction drawings or clean pictures for reference,” said Wu Zhenbang of the Shanghai Zhuzong Group Development Co, which carried out the renovation.

The appearance of the building had also been changed several times throughout its history. The building itself was in bad condition with cracked walls, seeping water and crumbling brickwork. Some of the wooden pillars and beams had been eaten into by white ants.

Under the guidance of the city’s bureau of cultural heritage, the university and the company studied pictures of the building and other buildings built in the same period to work out their final plan.

“The pictures showed the building was obviously designed by foreigners and combined Chinese and western architectural styles, such as the Chinese cornice and western verandas,” he said. “But the details were not clear. For the cornices alone, we made four actual size versions and invited experts to evaluate which one was closest to the original pattern,” Wu told Shanghai Daily.

“It’s an overhauling project and the government fund for cultural relic repair could hardly afford it, so we used our own budget,” said Zhu. 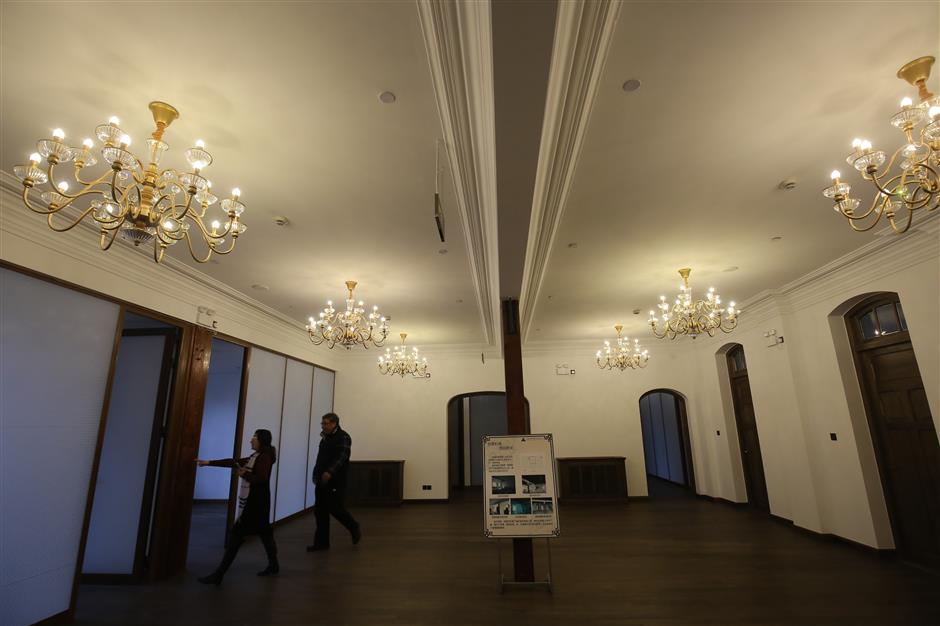 The hall on the second floor regains its large space.

During the 10-month renovation project red and grey coatings on the walls were removed to expose the original plain brick walls.

Walls on the first floor were removed to restore the original style of the veranda, while those on the other two floors will be restored in the future.

There used to be a hall on each floor which was divided into small rooms. Now they are back to their original large open space.

Zheng Shiling, an academician with the Chinese Academy of Sciences, said the building complex bore distinctive characteristics of Chinese buildings in recent history.

“Unlike many other historical buildings that are now incomplete, the whole complex at the university remains complete with preservation both of the structures and the campus culture,” he said. “It has high value to be protected as a cultural relic.”

Min Hui, vice president of the university, said they had another 11 historic buildings on campus and they would use the experience in restoring Gezhi Building in their renovation.

Lin Hong, director of the city’s educational construction management center, said the work also provided preferences for other universities in Shanghai when they repair their own historic buildings.

There are more than 1,000 historic buildings under protection of the city, with 5 percent of them at universities, according to Lin.

Beams in the hall on the third floor are reinforced with steel structure. 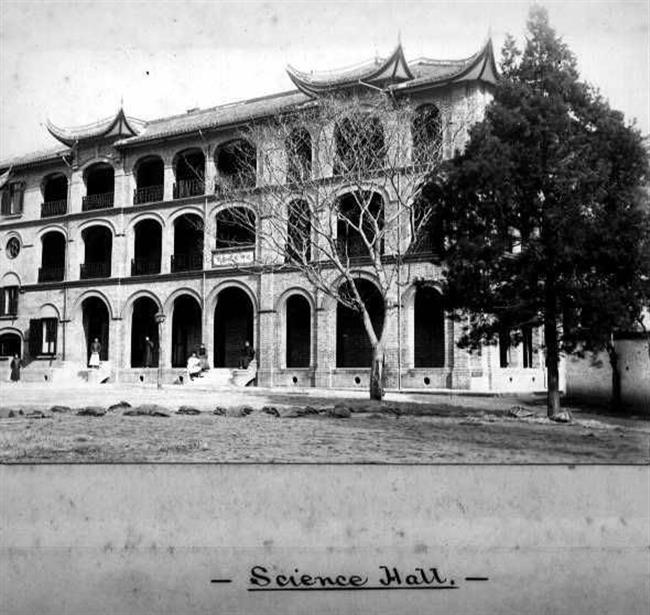