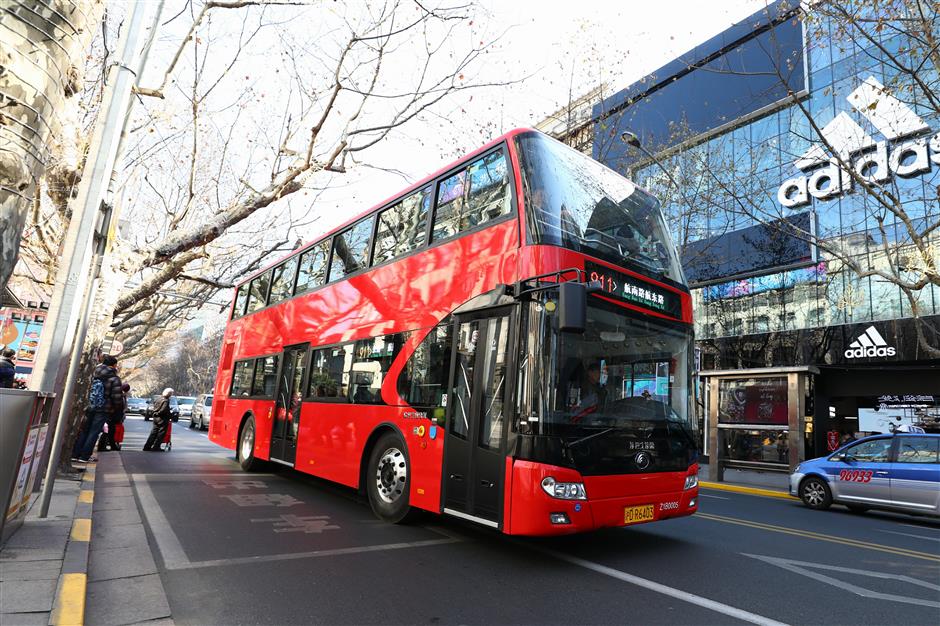 One of the new route No. 911 double decker buses is seen on Huaihai Road on Tuesday.

The double decker buses serving the No. 911 bus route are back on the road — they returned on February 13, nearly a month after the earlier model was retired.

The new double decker buses shuttle between Laoximen and Wukang Road, the same route as the old ones.

The route for the double decker buses is different from the other ordinary 911 public transport buses, which start from Laoximen and terminate at the junction of Hangnan and Hangdong roads in suburban Minhang District.

Bearing in mind safety concerns, the new double decker buses do not have an open top like the earlier models. But the stairs inside are wider and the huge glass windowpane provides a better view for passengers.

“The new bus is so much better than the old ones,” said Yang Jianlin who has been driving double decker buses for 20 years.

Yang said the old buses didn’t have a heating system. On rainy days, the upper deck of the bus would be flooded and water would leak on to the lower deck. And there is improvement that helps the drivers.

“In the past, I had to be extra careful when making a turn as there were blind spots that I couldn’t see from the rearview mirror,” said Yang. That problem is now solved. The new buses are equipped with two more rearview mirrors and an automobile data recorder to cover the blind spots.

Jiang Jinlei, a huge fan of double decker buses, was distraught when he heard that the service would be halted. But he rushed to Laoximen with his camera on Tuesday and was on hand to record the debut of the new buses.

“I boarded the bus in the morning and have shuffled in it three times,” said Jiang. “It is more spacious and safer inside, and more dashing looking from the outside.”

Many children, with their families, enjoyed a ride on the double decker buses on the first day. “I love sitting in the front row on the top deck, I can see everything,” said an excited Minmin, a 4-year-old who so enjoyed the ride that she wouldn’t get off the bus when her granny told her it was their stop.

Zhang Huaijian of Shanghai Ba-shi Co, the bus operator, said three double decker buses have been put into service. The company will put another seven on the streets after the Spring Festival break.

“Now the double decker buses depart about every 20 minutes,” said Zhang. “Hopefully we can reduce the gap to 15 minutes after more buses are put into service.”