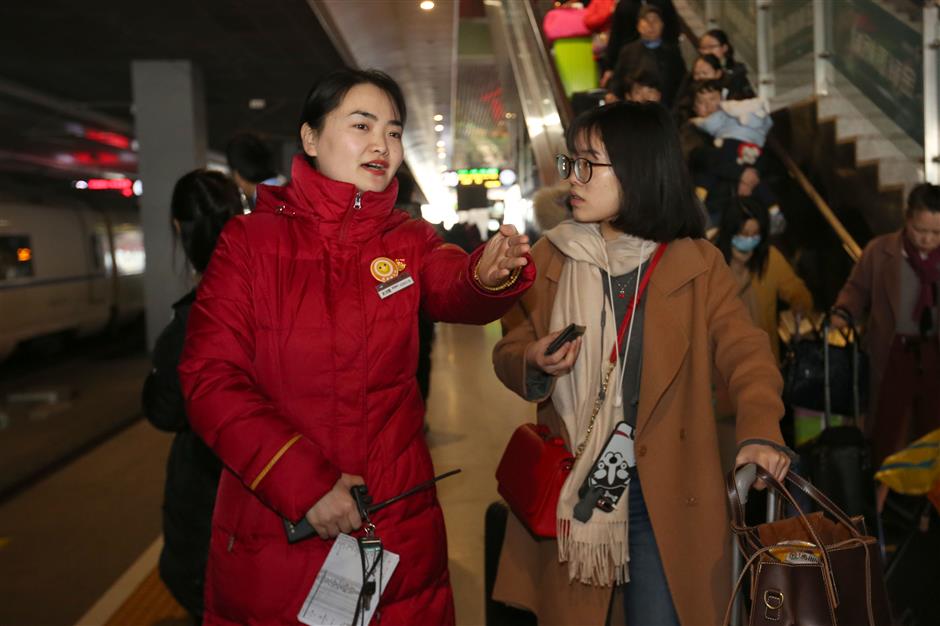 Shi Jiemin was on duty at Hongqiao Railway Station yesterday when a record 298,000 people took off from the station for the Spring Festival holiday.

Shi was the duty officer on a 24-hour shift. Normally, duty officers manage to steal some time for a quick nap during the long shift, but with extra trains added to clear out the holiday crowd, it has become difficult to shut the eyes.

On Friday, Shi was at the station for 33 hours, but did find time to grab couple of hours of sleep.

“I’m going to go home, put on a sleeping eye mask and sleep long,” Shi said as her overtime shift finally came to an end.

The Chinese New Year holiday travel rush is the largest single movement of people in such a short time, anywhere in the world. If that fact is staggering, so is the workload of those who have to ensure that the traveling masses are accommodated as smoothly as possible.

Anything can happen when so many people are on the move. Last Friday, Shi had to rush to the aid of a 2-year-old girl with a high fever after she fainted on a train as it neared the station.

The girl had arrived in Shanghai from Zhejiang Province, accompanied by her grandfather. She was going to spend the holiday with her mother, who couldn’t get time off work to return to her hometown.

Shi received the call from the train crew that the young passenger was running a high temperature. Emergency first-aid measures were put in place, and Shi greeted the train on the platform with an ice pack and medicine.

“Her grandfather insisted that he didn’t want an ambulance,” Shi said. “He wanted the girl’s mother to pick them up, so we had to leave it at that.”

A few days earlier, a woman suffered a miscarriage and started bleeding on the platform. Shi got her into a wheelchair and called an ambulance.

“Most passengers we deal with are anxious and longing to see families and loved ones,” said Shi. “And some of them are physically unwell.”

The station hall was jammed late last week, with people jostling and luggage piled high. It took some navigating for this reporter to follow in Shi’s footsteps as she went about her duties.

Many of those seeking her help were people who couldn’t get a ticket or missed their trains. In trying to sort out problems, Shi is dealing with people at their wits’ end.

“I try to get them on the next available train to their destinations, if possible,” Shi said, who constantly reminds herself that for every harried passenger in Shanghai, there’s someone waiting for them at the other end of the track.

Some 40 volunteers and 60 armed police officers join the railway staff during the peak travel period. Even with their presence, the workload is heavy. Shi figures she walks more than 15,000 steps during every shift.

“Our one and only duty is to keep the passengers safe and comfortable to the best of our abilities,” Shi said.

She has been on duty at Hongqiao Railway Station since it first opened in 2010. Prior to that, she was part of the crew on a Shanghai-Beijing express train, where she met her husband. He now works at Shanghai Railway Station.

“It’s nice that we both understand the job and can support each other,” she said.

Over her 17 years working on the railway, Shi said she has grown accustomed to missing out on family get-togethers during holidays. This year, for the second time in a row, Shi will spend the Chinese New Year’s Eve at work. She and her fellow station attendants will each bring a cooked dish from home for a holiday potluck dinner at the station. But they fully realize it will be a gulped-down meal because there’s no time to dilly-dally when there’s work to be done.

“My son is 4, and most of the time he is with my parents,” said Shi, adding that she doesn’t allow him to visit her at work because the station is too crowded for such a young boy.