More than 4m tourists over the holiday 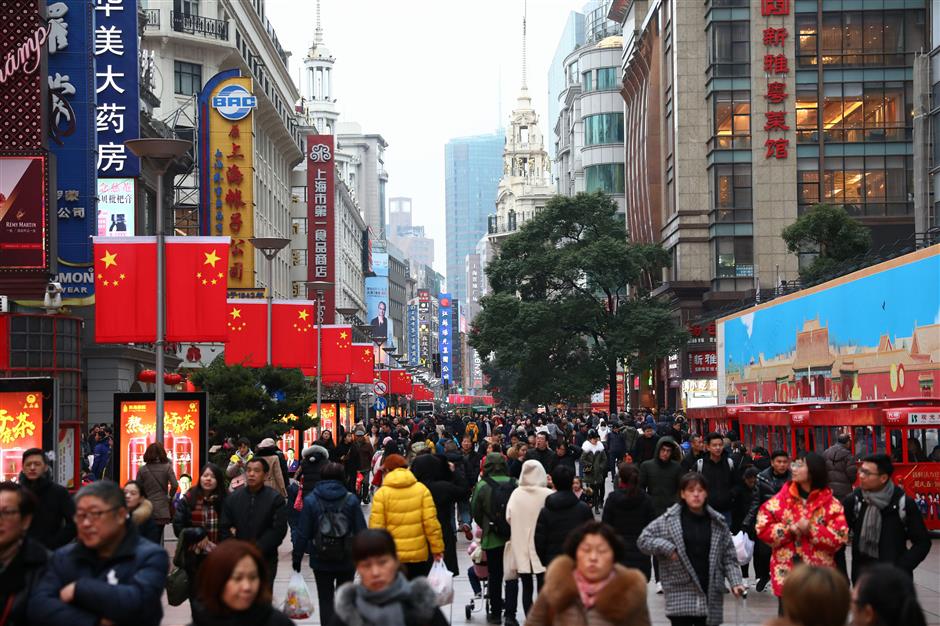 The downtown Nanjing Road Pedestrian Mall is crammed with people yesterday, the last day of the weeklong Spring Festival holiday.

More than 4 million tourists visited the city over the seven-day Spring Festival holiday, with Yuyuan Garden, watertowns, and Shanghai Disney Resort among the most popular attractions.

The 4.43 million total was about the same as last year’s Spring Festival, but tourism revenue — 4.94 billion yuan (US$780 million) — was up 1.5 percent, according to the Shanghai Tourism Administration.

The landmark Yuyuan Garden attraction in Huangpu District held a Spring Festival lantern show which pulled in a record 260,000 tourists on Saturday, the third day of the holiday.

Emergency measures such as guiding visitors to walk over the garden’s zigzag Jiuqu Bridge in just one direction, and rerouting entry and exit flows to deal with the crowds at Yuyuan Garden Station on Metro Line 10 were put in place.

Yuyuan Garden had 1.71 million tourists during the weeklong holiday, according to the administration.

“It was very crowded even though it was raining, and we had to move very slowly and be careful of our steps,” said Yao Lan, a local who visited Yuyuan Garden on Monday morning with her son.

“But overall, it is a place with the strongest Spring Festival flavor in Shanghai for these beautiful red lanterns, colorful dog-shaped lanterns and delicious local snacks,” she added.

Watertowns including Zhujiajiao, Fengjing, Qibao and Xinchang were also favored destinations among locals and visitors for diversified folk culture activities, the administration said.

The number of tourists in Zhujiajiao surpassed its visitor capacity of around 14,000 people at a time on Sunday, forcing operators to prevent further numbers from coming in. 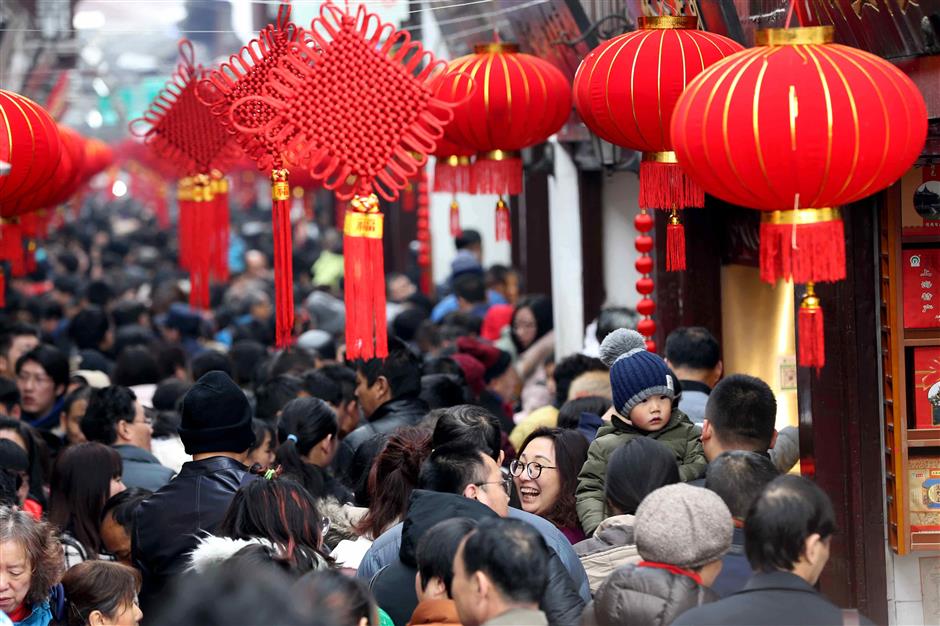 Qibao Town in Minhang District is packed with tourists yesterday.

Shanghai Disney Resort also had to apply the brakes, with ticket sales suspended on Sunday and Monday due to the large numbers of visitors.

Meanwhile, Shanghai International Resort had more than 240,000 tourists through the holiday, according to the administration.

Sightseeing cruise trips along Huangpu River and visits to suburban parks emerged as new popular attractions for locals during the holiday due to the opening of a 45-kilometer stretch of waterfront, the administration said.

A total of 289 cruise trips, carrying 79,000 passengers, ran on the first six days of the holiday, and 72,000 visitors to the city’s suburban parks were recorded during the holiday.

The Oriental Pearl TV Tower received 144,200 visitors, about the same as last year’s Spring Festival holiday, and Shanghai Science and Technology Museum and Shanghai Natural History Museum had more than 240,000 in total, up 6 percent. Shanghai Wildlife Park, however, saw its total for the week drop to nearly 130,000 visitors, down 16 percent.

The village, a watertown, is about 5 kilometers south from Shanghai Disney Resort.

Among the visitors were a local woman surnamed Wan and her family, who took part in hand-painted craft, bakery and ceramic art activities.

“We strolled on countryside paths at night and the sky is studded with twinkling stars. Farms in the village raise chicken, ducks and plant vegetables. It is a very pleasant and relaxing journey for urban dwellers,” Wan said.

More than 300 tourists and local citizens participated in “micro walks” to experience the old garden villas and sample Shanghai food in Xuhui, Jing’an and Huangpu districts during the holiday. The walks offer a new way to experience the city’s lesser known delights, organizers said.

Per capita spending by tourists staying overnight in Shanghai during the holiday was 1,092 yuan, up 7 percent from last year, according to the administration.

There were fewer self-driving tourists from the Yangtze River Delta region due to the damp weather and a weak cold front, the administration added.

Parks across the city received 3.1 million tourists over the holiday. The peak day for visitor numbers was Saturday, the third and sunniest day of the holiday — with 646,000 tourists recorded, according to the Shanghai Greenery and Public Sanitation Bureau.

More than 98,500 tons of domestic garbage were handled for the week from February 14-20, up 19.7 percent from the same period last year, according to the bureau.

In total, 4.9 tons of fireworks garbage were cleaned, a drop of 69 percent from last year. The city has banned all fireworks within the Outer Ring Road since 2016.