The mass return to the big city 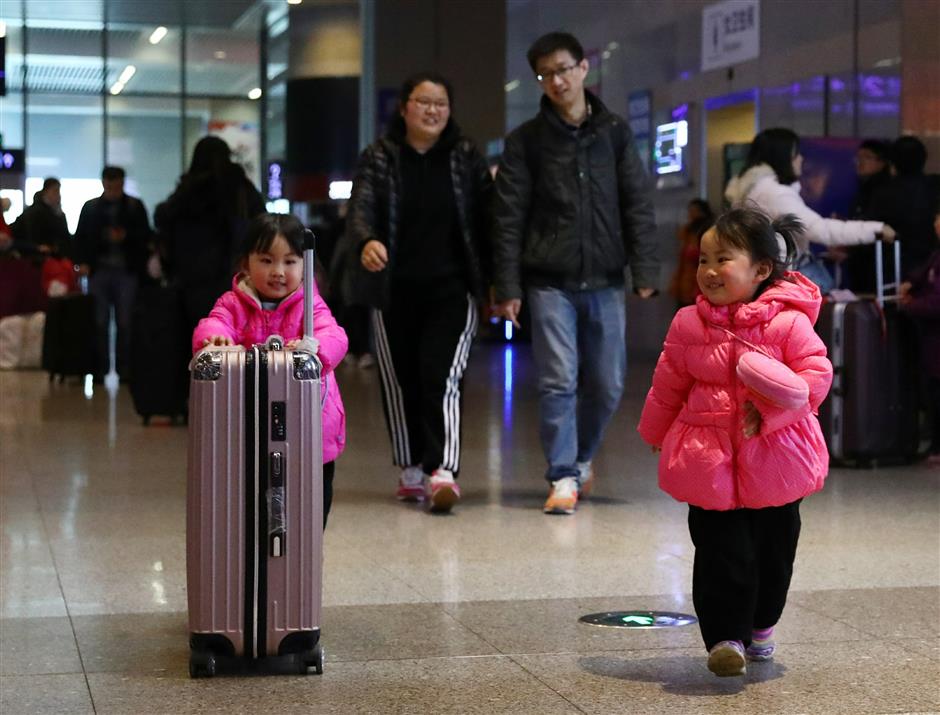 Hongqiao Railway Station looks peaceful yesterday as these youngsters make their way in the arrival hall. But they were fortunate as some 450,000 passengers arrived in Shanghai by train yesterday as the holiday ended.

As the Spring Festival break came to an end, the huge numbers returning to Shanghai meant that for some getting to their city residences has not been easy.

According to Shanghai’s transport commission, about 450,000 passengers arrived in the city by train yesterday, about the same number as on Tuesday.

Bao Zhong went to the arrival hall of Hongqiao Railway Station, clutching flowers, at 3:30pm yesterday to meet his girlfriend from Shaanxi Province.

She had messaged that she had alighted from the train, but Bao couldn’t fathom which door she would be exiting from.

“I specifically booked a train that arrived in the afternoon so that she won’t have to jostle her way out from the horrible crowd at night,” said Bao.

He shuffled between watching the large rail information board and monitoring his smartphone — and whether he succeeded or not in meeting his beloved isn’t known as the Shanghai Daily lost track of him in the crowds. 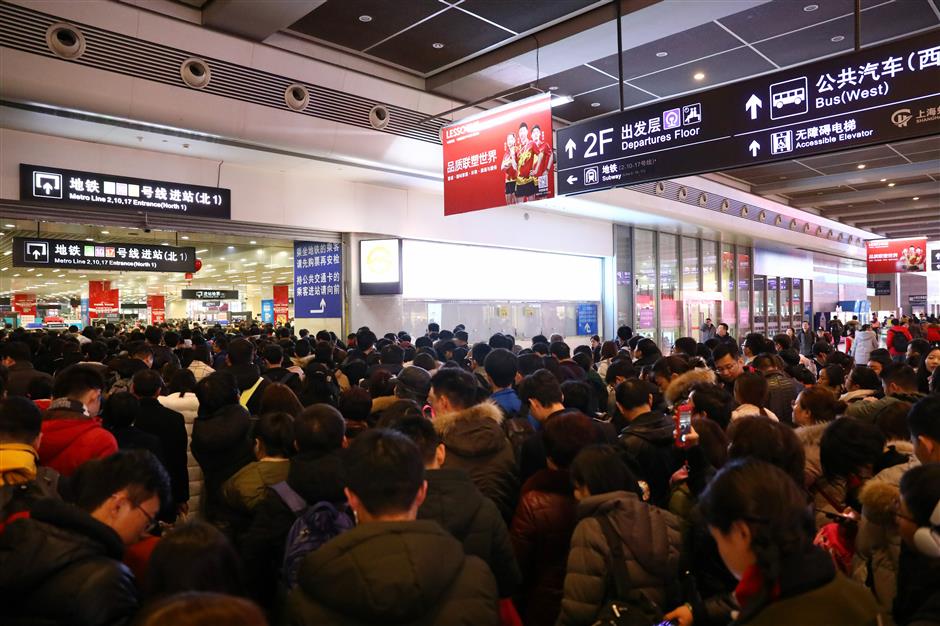 Passengers line up at Hongqiao Railway Metro Station to get through the turnstiles yesterday. 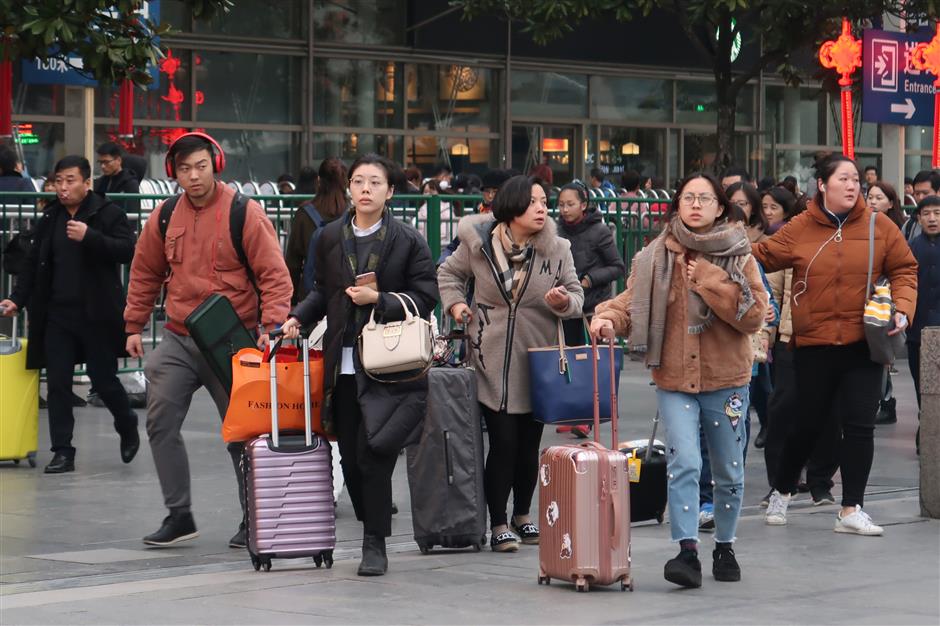 Zhu Hongqiao was another caught up in the big rush back into Shanghai. He bought a ticket on the last train from Wuhan in Hubei Province to Shanghai on Tuesday. “I seldom go home,” said Zhu. “I bought the last one so that I can spend a little more time with my parents.”

He arrived back at Hongqiao Railway Station at 11:40pm, only to find a long queue — “more than 100 meters long” — waiting for a taxi.

A board in the arrival hall warned that it might take more than an hour to get a cab.

Zhu ended up taking Metro Line 2, which launched extra trains after its regular operation to help passengers to get home. Those extra services from Hongqiao Railway Station only stopped at major stations along the line, however.

From yesterday until tomorrow, the late night extra Metro trains on lines 2 and 10 are scheduled to operate till 1am.

Shin Song, also from Hubei Province, said she had to get off at Songhong Road Station since the late service ran straight past her stop Beixinjing Station on Line 2.

“I walked 2 kilometers home in the rain eventually because I couldn’t find a taxi or book a car online,” she said.

Meanwhile since Monday, the city opened 30 extra night bus routes departing from major transportation hubs to help people get home. But many were unaware of the extra services. Zhu told Shanghai Daily he hadn’t even thought about late buses as an option. He got off Metro Line 2 at Zhongshan Park Station and again struggled to find a cab.

At the three major train stations, extra Metro trains on lines 1, 2, 3 and 4 were operating early morning to deal with the large passenger flows returning to Shanghai.

Although the four major taxi firms in the city — Qiangsheng, Dazhong, Haibo and Jinjiang — mobilized about 30,000 taxis to the city’s main transport hubs and tourist sights to help with the passenger flow at the end of the holiday, it still proved difficult to meet the high demand.

According to the statistics from Qiangsheng, from February 15 to 20, 24,509 taxis took more than 70,000 people home from Shanghai Railway Station. “The number in Hongqiao must be bigger,” said Tang Jian, manager of Qiangsheng. “The passenger flow almost doubled compared with last year.”

On the roads, the traffic flow on highways in Shanghai reached 583,100 by 3pm yesterday, according to Shanghai Road Administration Bureau.