Half the Sky
Shot by Zhou Shengjie. Edited by Zhong Youyang and Yang Jian. Special thanks to Andy Boreham.

While most of her colleagues stood cheering along the No. 4 runway at Pudong International Airport, waiting for the successful landing, Le was closely observing the flight from a jet flying alongside.

“I heard the success of the flight through my earphones, but I had to keep calm in order to complete my mission,” she said.

Le is one of the only two women among 41 flight test engineers working at the Commercial Aircraft Corporation of China (COMAC), developer of the C919. Their responsibilities include planning and preparing flight tests, overseeing aircraft buildup and ensuring that sensors and recording systems are installed to capture data parameters.

Sometimes, the engineers travel on test flights to guide pilots in carrying out various experiments and to collect and analyze data in the cabin.

During the C919 maiden flight mission, she served as deputy director of the technical support team.

“I believe female test flight engineers have capabilities equal to those of their male counterparts, and sometimes they even have advantages, such as being more thoughtful and careful,” Le said.

In previous work in Dongying in the eastern province of Shandong, Le compressed the number of test flights by half with meticulous planning, saving millions of yuan in costs.

Le dreamed of flying since she was a child. She liked flying kites and watching through windows whenever people boarded an aircraft. After viewing the US movie “Top Gun,” she resolved to become a pilot.

Her dream has partially come true. The 31-year-old engineer has so far flown more than 300 hours in test flights for the ARJ21, the country’s first domestically developed regional jet.

When most of her female classmates at Fudan University eventually chose work in downtown office buildings, Le applied to work for the engineering department of COMAC in 2009, a year after the Chinese jet maker was founded in Shanghai.

“I had done my research,” she said. “I knew all about the corporation’s training and development programs when I was still a sophomore.”

She majored in aircraft design and engineering, a discipline with few female students.

After designing scaffold for aircraft assembly lines for 18 months, she applied for a training program that was to select the first group of test flight engineers. 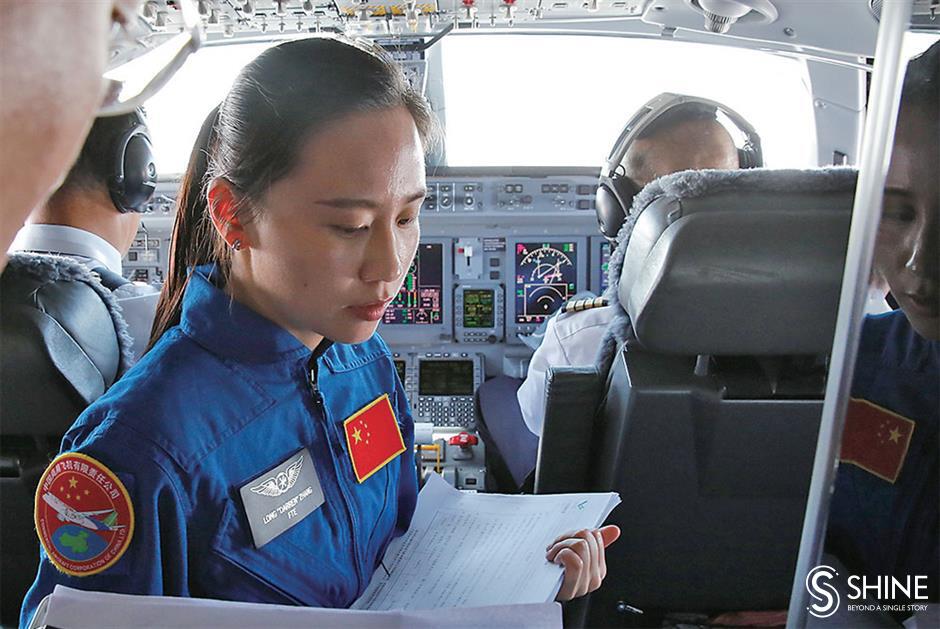 “I was thrilled to have the opportunity to fly on domestically developed aircraft, but my parents worried about the safety of the job,” Le said.

Her mother implored her to act natural when sitting for an interview for the training program so that experts could see her as she was and evaluate whether the job was suitable for her.

A US interviewer present at the session told Le that he believed she could become an excellent test flight engineer, just like his daughter. She passed the interview and exams and went on to study at the National Test Pilot School in the US.

Her first test flight there was not as romantic as “Top Gun.” Her tutor at the US school required Le to experience an aircraft stall and downward hovering in a small two-seater jet, with a parachute on her back. She was told to count the number of hovering circles as the jet was losing altitude.

“I didn’t have any fear, but there was a frisson of excitement,” she said. “I fully trusted the tutor, who was a senior pilot graduated from the Massachusetts Institute of Technology. I then realized how important it is for a qualified flight test engineer to be reliable and professional in order to build trust with other team members.”

After graduating from training, Le was dispatched to Yanliang in the northwestern province of Shaanxi between 2012 and 2015. There she was involved in test flights for the ARJ21. She served as the chief test flight engineer for the third prototype of the jetliner and became familiar with every component of the aircraft.

During that period, she worked six days a week and was given leave to return to Shanghai once every two months.

Her parents became anxious about any flight accident they saw on TV and called Le constantly, concerned for her safety. That was especially true after Malaysia Airlines Flight 370 disappeared during a flight to Beijing four years ago, she said. The aircraft, with 239 people on board, has never been found.

While working in Shaanxi, Le had to brave sub-zero temperatures to carry out various experiments on board the ARJ21.

The 90-seat ARJ21 began commercial operations in June 2016, with the first flight between Shanghai and Chengdu, capital of Sichuan Province. Le later moved back to Shanghai and joined the preparatory team for the maiden flight of the C919.

After the completion of the milestone mission, Le’s lone female colleague, Li Nan, applied to become the first female test pilot for the corporation. Le wanted to do that, too, but her height and short-sightedness disqualified her.

Instead, she was appointed as a league secretary of the test flight center of the corporation last year.

Though Le spends most of her time in an office arranging events or meetings among the center’s young engineers, she is still obsessed with flying. She has applied to get training on a flight simulator during her free time to improve her professional skills.

“I’m always ready to take part in any test flight mission,” she said. “The office job improves my communication skills, and that helps me better prepare for future flying assignments.”