Women getting hooked on rock climbing

SHENG Qing and a small group of fellow climbers carry backpacks weighing 15 kilograms as they hike 40 minutes to Shitou Crag in Lin’an in Zhejiang Province, a 110-meter-high cliff known as one of the best rock-climbing spots near Shanghai.

Since 2003, Sheng and her husband have scaled countless rock faces at home and abroad. To climbers in the know in Shanghai, Sheng Qing is called Moli.

Rock climbing is a sport that tests physical strength, personal willpower and the capacity to observe and analyze. Unlike climbing gyms, where the routes are marked, the way up a cliff in the wild must be determined by the climbers themselves.

“It is the rapture of reaching the top and looking out with a bird’s-eye view over the surroundings below that keeps me going,” said Sheng.

It was indeed considered a more masculine sport in China when Sheng first started climbing. The degrees of difficulty assigned to various climbs have been defined by men. But in recent years, more women are getting into professional climbing.

Though women are no match for men when it comes to physical stamina, they have better flexibility, which often helps them with more tactical manoeuvres on rock faces.

“I want people to cast aside their stereotypes of rock climbing as a man’s sport and just get out and enjoy it,” said Sheng, who often takes beginners on climbing trips.

Two women on the team that climbed Shitou Crag, Yuan Chen and Zhu Chenlei, said they had never scaled an outdoor cliff before. The intensive muscular soreness that resulted didn’t damp their enthusiasm for the sport.

“When I thought I couldn’t go on, Moli tightened the rope around my waist and I felt relief,” said Yuan. “The rocks still beckon me.”

Sheng and climbers like her are inspiring a new generation of women outdoor enthusiasts in China.

One of them is Zhao Anlu, 24. She has been climbing for four years. She said the sport is more than just a lifestyle pursuit. Rather, it has come to reflect her attitude toward life itself.

Sheng Qing climbs Shitou Crag in Lin’an in Zhejiang Province. Shitou Crag is a 110-meter-high cliff and the best rock-climbing spot near Shanghai.

“People like Moli are victims of online trolls at times because they advocate something that some people think girls shouldn’t be doing,” said Zhao.

Zhao used to skateboard. When she started that activity in 2008, there were only three women in Shanghai who had the skill to compete with men.

A few years later, injury and what she called the fickle attitude of the skateboarding community finally sidelined her. She began climbing in a gym in 2014 after recovering from a major injury.

“Like life, there’s despair when you see a goal but can’t reach it,” said Zhao.

“Yet you just don’t want to give up, no matter how many times you fall to the ground.” 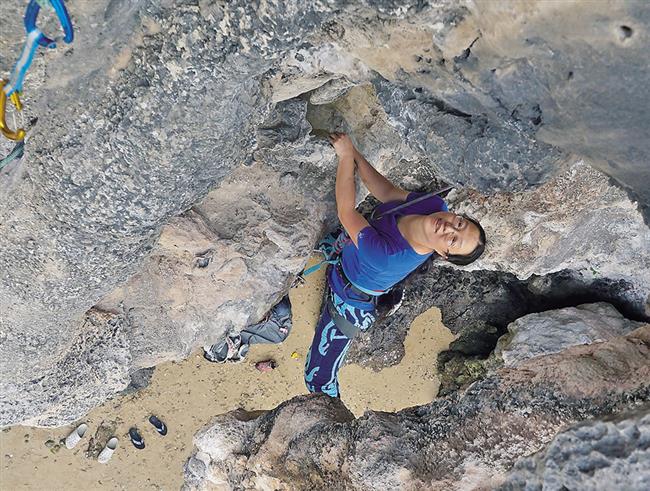 Sheng Qing takes to the rocky mountains in Krabi in Thailand in this 2015 photo. 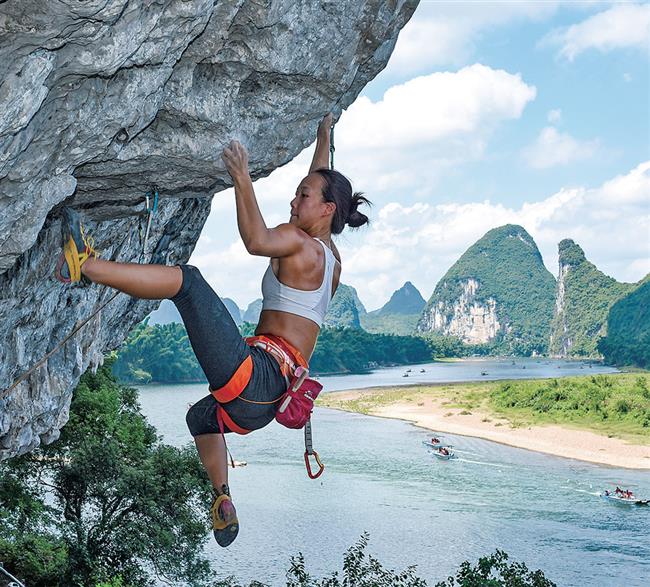 Zhao went to Thailand in 2015 for training. Locals called her “the screaming girl on the beach” because every time she fell, she would scream out in frustration.

Indeed, rock climbing is no cakewalk. It can be painful to the body, especially to joints and fingers.

But most of all, what climbing taught Zhao was trust and humbleness. She once climbed with a woman she had just met a few hours previously.

“Your life hangs on a rope, and you have no choice but to trust your partner who is on the other end,” she said.

Zhao, like Sheng, met her husband on a climb. She tells people she married her best friend and most trustworthy partner.

She now does volunteer coaching at climbing gyms every week.

“I want more people to discover the sport, though they won’t necessarily find love,” she said, with a chuckle. “But they can find universal connections with other people and nature.”