Qian Xiaoyan’s life reads like a travelogue. She is a freelance writer and one of the first 10 Chinese authors for Lonely Planet.

TO Qian Xiaoyan, Hans Christian Andersen’s reflection on travel is more than just a favorite quote. It’s the credo for her life.

“We must embrace our time today,” she said. “There’s nothing to fear.”

Well, almost nothing to fear. In 2012, she narrowly escaped death from pulmonary edema during a trip to Tibet.

“If I hadn’t been admitted to hospital, I would have died on the road,” she said. “It was much harder to go upstairs than to climb the Himalayas.”

Thanks to timely treatment, Qian was back on her feet in seven days.

It seems she was born to travel. As a child, she had to take a two-hour bus trip every day to school.

“When I look back at my childhood, I always think that might have been the start of my interest in traveling,” she said.

But it wasn’t until she was 20 that she actually took what might be called a real journey, when she participated in a one-month school trip to southwestern China’s Sichuan Province.

“We took a train for 44 consecutive hours,” she said. “In the Jiuzhaigou World Heritage site, I saw foreign backpackers for the first time. I was very impressed.” 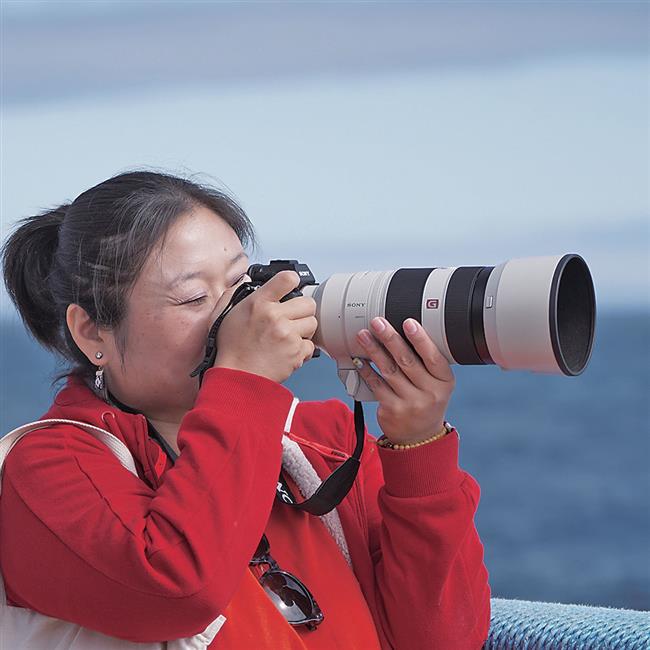 Qian has never minded forfeiting the comforts of home for the sake of adventure. She simply adapts to whatever conditions confront her.

If that means sharing a room in a hostel or sleeping crunched up against other passengers on a bus, so be it. If that means trying the sometimes curious cuisine of other countries, bring it on.

When she visited Scandinavia, Qian said she sampled fermented Baltic Sea herring, which is considered a Nordic delicacy.

“When I opened the can, it smelled like 1,000 people breaking wind together,” she said.

So many travel images fill her memory book — standing under a night sky studded with diamonds at 4,000 meters, walking in an Adelie penguin colony in Antarctica, getting a henna tattoo on her hand in India.

Her visit to the Victoria Falls on the Zambezi River at the border between Zambia and Zimbabwe ranks among the most unforgettable trips.

The falls, she said, have been described as world’s largest sheet of falling water, with numerous rock pools formed by thousands of years of erosion. One of them is perched on the edge of a very sheer drop and one has to swim to reach the pool, she said.

“I can swim, but I had never swum in the wild,” Qian explained. “I was fearful that if I swam in the wrong direction, I would fall into the water below. But my guide encouraged me, so I decided to give it a go. The experience was amazing.”

Summing up the experience, Qian said a traveler has to learn to trust others when on the road.

Qian quit her job in advertising in 2007 to concentrate on travel after her first trip to Europe. She said the decision came after she tried to go to a popular local restaurant in Europe.

“It was closed for the day,” she said. “So I returned the next day and asked the owner why it had been closed. He said simply that he wanted to spend some time with his family. That totally changed my stereotyped image of Westerners as people who don’t care much about their families. It also made me realize that I needed to make some time for myself.”

Going freelance, she became one of the first 10 Chinese authors for Lonely Planet in 2009. So far, she has contributed to more than 20 titles for the travel guide publisher, including Shanghai, Japan and East Africa.

“It’s not an easy job,” Qian said. “Many people think travel writer must be endless fun. But it’s not. A job is a job, and this one can be tough at times.”

Daguai, Shanghai’s famous travel and food writer, is Qian’s close friend. “Women are more considerate and easy-going than men, and therefore she is suitable for her work,” he said.

Qian explained the effort that goes into making detailed itineraries on tight schedules and deciding what is most worth a visit. “I talk to everyone, from taxi drivers to hotel workers, to get an authentic overall picture of a place,” she said.

Qian also works periodically as a tour guide for a high-end tourist group. She has led tours to the island of La Reunion, to Madagascar and to the North Pole, among other destinations gaining popularity among Chinese travelers.

“I use my travel experience to guide groups,” she said. “I read a lot of books to glean information about places that will make a trip more meaningful for tourists. I want members of my tour groups to see beyond the obvious.”