Festival spirits not dampened by drizzles 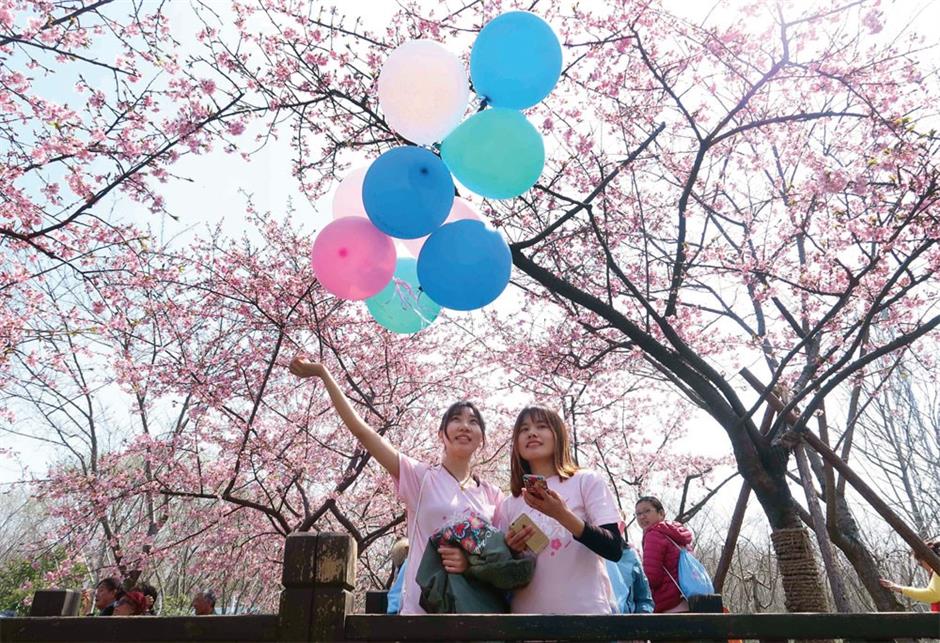 Women fly the balloons while taking a selfie photo under the cherry trees in Gucun Park, where the annual cherry blossom festival is underway.

This year’s festival, which has become one of the most popular attractions in the city, kicked off last Friday and will run through until April 15. The park features 12,000 cherry blossom trees of 82 species, the largest concentration of such trees in the city.

The event, which was initially launched 2011, is also part of the district’s aim to promote its cultures and eco-tourism. A swathe of events have been planned throughout the month-long festival to attract more visitors to participate.

Cherry blossoms can bloom and wither in as little as seven days, but several of the different species can either bloom earlier or later than some of the more precocious trees.

This year, the park’s operators have created some new sightseeing spots along Cherry Blossom Avenue, the main east-west boulevard of the park, with new species of cherry blossom trees. Over 40 red drooping cherry flower trees have been planted along the avenue and are sure to become new attractions for visitors to pose with.

Zhang Zhong, general manager of the park says that “when the cherry flowers fully bloom, the area will look like a massive red cloud.”

Another new attraction, Frog Dock, has also been created for visitors to watch blossoms along a river.

The operators have prepared five attractions near the different entrances to the park for the convenience of visitors.

The neighboring Children’s Carnival, which is featured by the carousel, mini-train, pirate ship and a four-dimensional cinema, has around 500 cherry blossom trees along a river. They include the Yoshino cherry, one of the most popular cherries.

There are also magnolia and crab-apple trees planted among the cherry trees that create elegant flower paths on the riverbank.

A small cherry forest has taken form in the Leisure and Sports Zone. It covers 5,000 square meters of various cherry blossom trees relocated from other major attractions within the park.

The operators relocated these trees in the zone during a rearrangement in 2013, and accidentally created a special mixture of various cherry species.

Early cherry blossoms in the white color dominate the Woods Walk Zone in the southeast of the park. Most of them will bloom by end of the month to create a spectacular white flower sea.

There are over 80 species of cherry blossom trees planted near the No.3 entrance to the park. The garden, covering 50,000 square meters, is designed to let visitors admire the various styles, colors and shapes of different species.

To better serve the large number of visitors, the park operator has prepared a number of cultural activities, such as a photography and poem-writing competition, as well as a public poll to select the most beautiful cherry trees.

“The eight most popular trees” have been marked in the park, which people photograph more than other trees. Through the park’s WeChat account, visitors are invited to vote for this year’s “Cherry Tree Queen.” A lucky draw will be held among the poll’s participants and 30 lucky visitors will win a gift from the park.

Furthermore, a match-making event will push the cherry blossom festival to its climax. Single young visitors can visit a wooden pavilion behind the cherry flower area, where they can take part in games designed to introduce them to new friends.

Other cultural activities, such as traditional Chinese operas, fashion shows and martial arts performances, will be held at the main grassland in the park during the festival. Some cultural heritage masters of Baoshan will teach their traditional skills to visitors.

In one of the most innovative performances, Gu Haohao, director of Shanghai Kunqu Opera Troupe, and the famous Kunqu Opera performer Shen Yili will perform along with ballet dancer Guo Wenjin and pianist Song Siheng.

Moreover, various indoor lectures and seminars will be held in the Hengshan Beijiao Hotel on cherry-related botany, literature, music and painting. Audiences can sip a cherry blossom tea and eat snacks while they listen to the lectures of artists and scholars.

“The events aim to involve traditional Chinese cultures and operas into the popular cherry blossom festival, especially for children,” an official with the district’s culture bureau said.

Meanwhile, the district’s tourism authority has set up a tourism exhibition and experience center at the No.2 entrance of the park. Visitors will experience the government’s ambition to turn the traditional iron-steel base into an eco-tourism hub.

Cherry blossom paintings, hand-drawing maps, mailbox and other decorations have been created at the entrance to the center for visitors to take selfie photos.

Entering the center, visitors will be embraced by pink cherry stickers and balloons, with introductions on the Wusongkou International Cruise Terminal, Paotaiwan Wetland Forest Park, Shanghai Museum of Glass and other nearby attractions in the district.

“Regular activities, themed on cruise liners, creativity and environmental protection, will be held in the center to attract more visitors,” an official with the center said.

The tourism authority has issued a shopping and travel passport for visitors to the cherry blossom festival. Passport holders can enjoy discounts in some shopping malls, hotels, travel agencies and restaurants in Baoshan. Visitors can receive a limited-edition postcard at the center during the festival. A total of 10,000 such postcards about tourism attractions in Baoshan will be issued.

The center has designed one- or two-day tours across the district. Visitors can walk to other attractions near the park, such as Meilan Lake and the Shanghai Museum of Glass, or take shuttle buses to other sites. They can also taste local-style cuisines at nearby restaurants and hotels.