Iceman at the cutting edge of his art 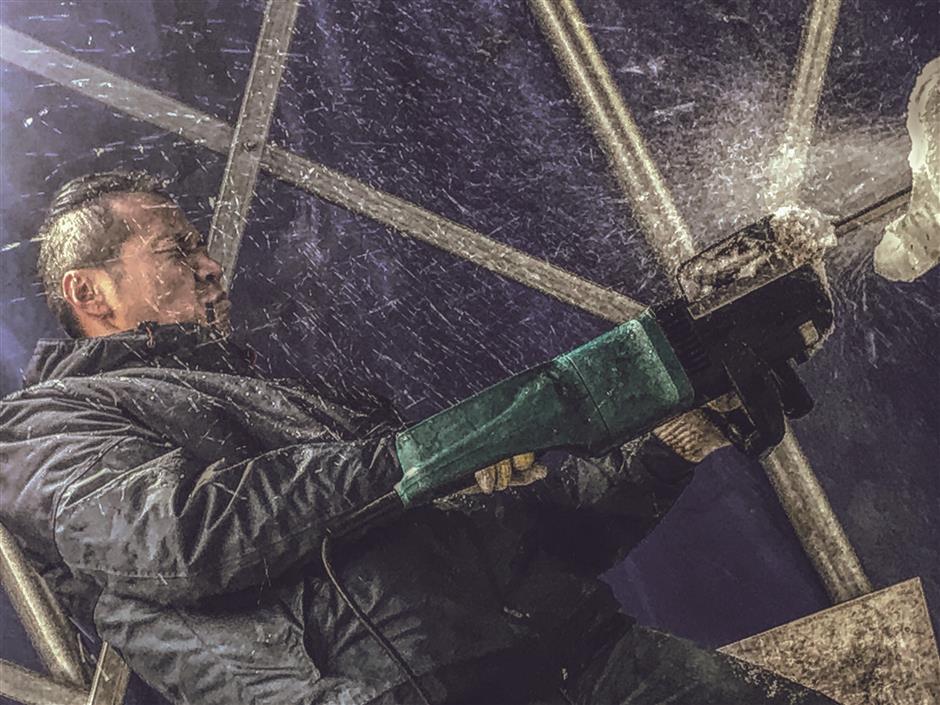 Li Xiaojun creates an ice sculpture using an electrical power tool which causes small pieces of ice to fly into his face.

Ice sculpture is usually seen at a feast, placed at the entrance of an important ceremony or on a table as a decoration, and may represent the noble position of the host in the community.

Li Xiaojun, a 36-year-old Jiading native, however, regards ice sculpture as an artwork.

Recently, he started to operate an ice sculpture studio on his own, devoting himself to further study, the cultivation of more professional ice sculptors and promoting the booming artwork to the public.

“In Japan, ice sculpture exhibition is a popular activity in Tokyo’s Ueno Park with almost 100 master sculptors carving the ice together, while local residents can observe the entire process,” said Li.

“A hundred ice sculptures stand in the center of park as an artwork and residents can enjoy the unique charm of this activity, which is a great way to improve people’s sense of appreciation and attract more people to involve in this arts performance. To them, ice sculpture is an artwork.”

Li’s biggest wish is to launch an ice sculpture exhibition in Shanghai such as the one in Ueno Park, but he knows he still has a long way to go.

Before becoming an outstanding ice sculptor, Li was a cook, especially good at food carving. He showed his talent on carving arts and crafts at a young age, and felt passionate about it.

“Before I went to the school, I borrowed some useless textbooks for arts class and just drew or carved the pictures or figures such as Monkey King on my own. Surprisingly that even though nobody ever taught me how to draw or carve, I can just follow the steps to fulfill the assignment,” he said.

In his last year in middle school, two cooking-themed movies, “The God of Cookery” and “The Chinese Feast,” became a turning point in his life. In the movies, the seasoned skills on food carving and ice sculpture inspired Li to work as a cook.

“I decided to study cooking in the vocational school because of the movies, and painting is a sustainable advantage to be a good chef. I was sure that I would be a good Chinese cuisine cook for no reason,” said Li. “And finally, I did it!”

During his time in the Qunyi Vocational and Technical School, he studied harder than ever.

“I was then a green hand on ice sculpture, but it seemed similar between food carving and ice sculpture. So I was quite confident,” Li said. But he was wrong. 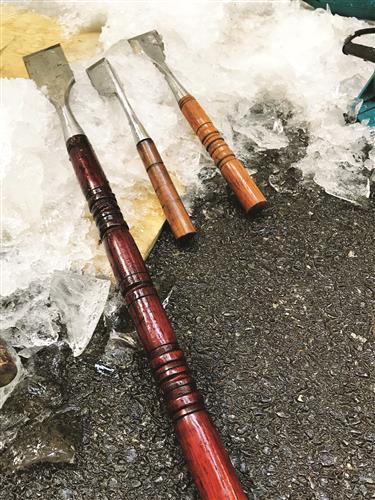 A set of tools of various sizes used for the carving

Rather than becoming dissuaded by failure at his first ice sculpture competition, Li suddenly became obsessed by it. However, ice sculpture in China is not a popular program and lacks seasoned teachers or study courses. Southern areas like Shanghai were in an even worse situation.

That couldn’t stop Li from exploring in ice sculpture realm, and he kept seeking out any ice sculpture lovers to get information and experience from them. That was how he heard the name Mitsuo Shimizu, a prestige Japanese ice sculptor.

“The information came at the right time to me,” Li recalled. “After coping with his 200-page book, I carved and practiced in my spare time after work and took pictures of my assignments every time.”

But carving the shapes from the book is not enough to become a skilled ice sculptor. Li was always looking for instructions. For example, on the ways of using tools which is quite different from carving food.

Li never imagined that a golden opportunity was coming in 2010, the year people around the world came to Shanghai for the World Expo. As an ice sculptor in Dongjiao State Guest Hotel, Li was going to purchase a series of ice carving tools from Japan, and coincidentally, the agent to purchase the batch of tools was Hatsuyoshi Araki, the then executive chief of Okura Garden Hotel and a close friend of Shimizu’s.

Araki was impressed with Li’s photo album of carving works reproduced from Shimizu’s book, so he introduced Shimizu to him for further study. Shimizu welcomes students from all over the world, and Li became his first and only Chinese student.

Under Shimizu’s instruction, Li learnt to carve a variety of figures. He said, he’d never imagined that you can separate a block of ice into several small ones and weld these small ice onto the large block, making the final figure even larger than the original block.

Another common obstacle is the effect of temperature. “We need to carve from outer to the center to protect it from melting,” he said. “That requires you to have a rough idea of the sculpt before you even start the first cut.”

While studying in Japan, Li also noticed the importance of owning a handy carving tool. Japanese tools are well-developed due to the booming ice sculpture industry, and as a result, Li bought a bunch of tools despite the expensive price.

“It is said the Japanese knives can be used at least by three generations so I just accepted the price,” he said.

All these efforts paid off in 2013, when Li ranked number two at the World Pastry Cup Ice Sculpture Category in Lyon, France, which is among the highest culinary competition globally. Li was the first Chinese candidate winning this glory.

Li visits Shimizu every year to gain the latest knowledge and innovations in ice sculpture. Li’s instruction by a master teacher together with his hard work made him the pioneer sculptor in China.

Having been encouraged by so many teachers in his career, Li finally determined to launch his own ice sculpture workshop and planned to move to Jiading’s Huangdu Town for a larger space. So far, there are tens of students ranging from a youngster to a 50-year-old.

Li believes carving ice is not as difficult as it looks. With determination and practice, everyone can create an ice statue. He welcomes more people to join them to enjoy and experience the charm of a brand-new artwork. 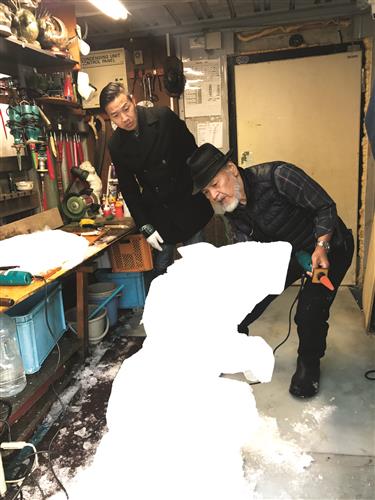