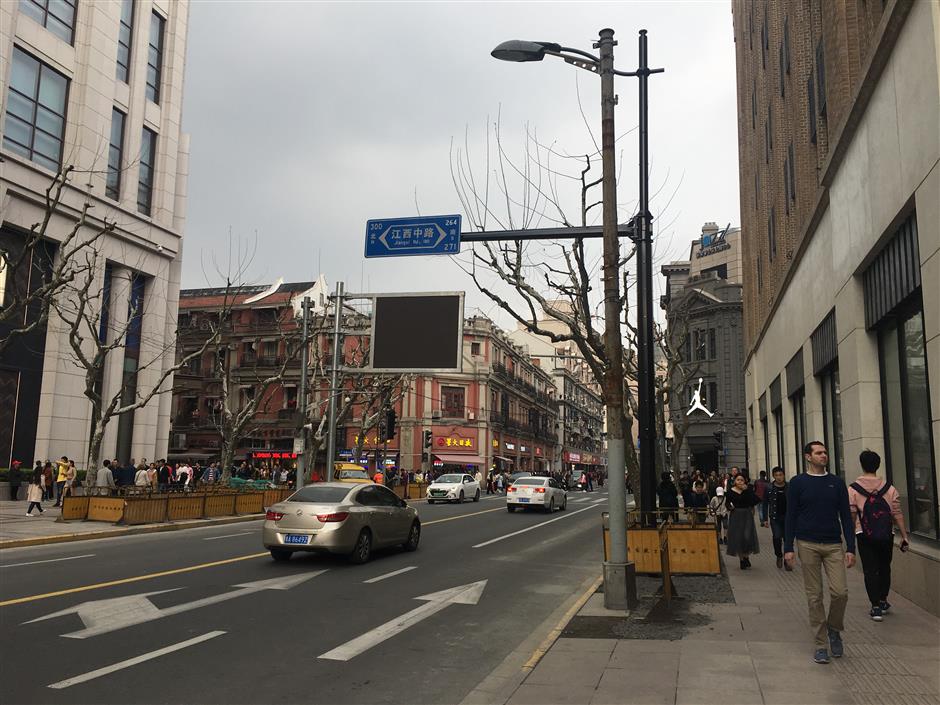 THE first batch of integrated lamp posts have been pitched on Nanjing Road E.

“The new generation poles not only make the roads look tidier but also leave more spaces on the pavements,” Wang said.

It will also help in the city government’s ongoing campaign to remove the overhead cables and bury them.

The hanging cables will run through the new posts. Additional cables have been installed inside so that equipment can be added onto the poles easily in future.

The first batch of 28 such multi-functional lamp posts will be installed along the Nanjing Road E. by early April, while the existing 91 poles along the section between the Bund and Henan Road M. will be removed.

Currently, separate poles of cement or steel for single purpose are being erected of various sizes, colors and material.

The cement poles, which are the most common ones, will support the radial overhead wires that supply electricity, telecommunication and run the electric buses.

About 11 kilometers of road around People’s Square, Xintiandi and Yuyuan Garden will have the new lamp posts installed by the end of the year, said Wang.

The overhead cables in these areas will also be removed by that time.

The 10-meter-tall lamp posts in muted black color will be made of either high-strength steel or alloy and are intended to withstand typhoon, Wang said.

They will be coated with special paint and the prickly small advertisement stickers won’t stick on them, he added.

Another 10 poles will come up on Nanjing Road E. near the Bund and will power the pantograph of the electric buses.

“The narrow pavements and complicated underground pipelines on Nanjing Road have made it a challenging project,” he said.

Workers start work on installing the lamp posts after 10pm every day.

Installing the new lamp posts was also difficult in the old part of the town, Wang said.

Engineers had to keep a close watch during digging to check the position of the existing underground water and gas pipes, he said.

By 2020, nearly all the main roads in downtown Huangpu, stretching 69 kilometers, will have the old poles replaced with the new ones. These posts will also be erected along some small streets.

Citywide, 100 kilometers of overhead cables, mostly within the Inner Ring Road areas, will be removed by the end of the year, while the multi-functional poles will replace the old ones simultaneously.

Shanghai first started to remove the overhead cables in the 1990s, but only about 600 kilometers of cables could be removed in the past two decades due to complicated ownership of the space and limited underground area.