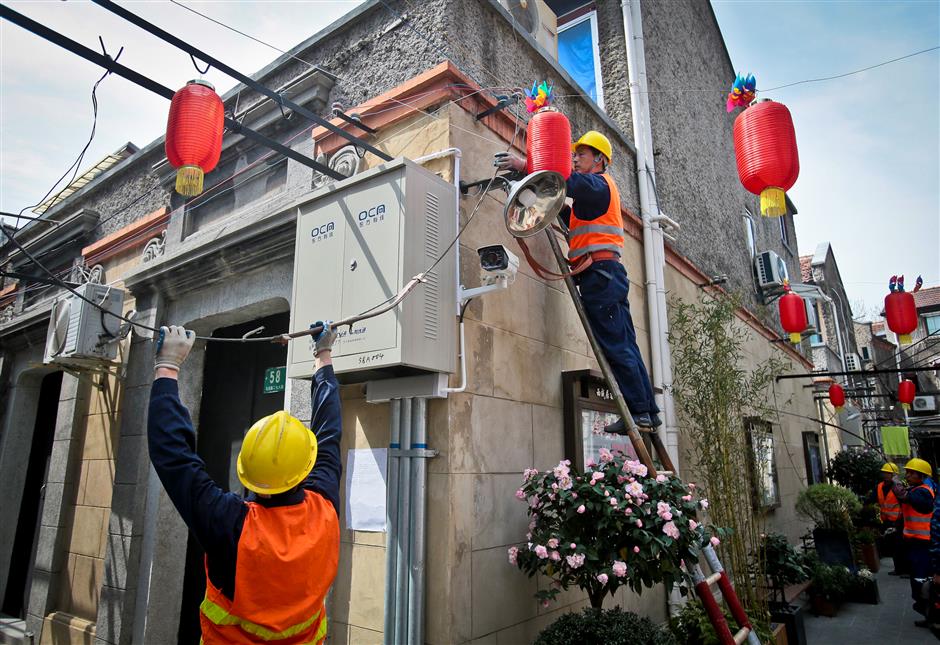 RESIDENTS of Xicheng Lane, a traditional shikumen style neighborhood near Xintiandi, are finally saying farewell to their tangle of overhead cables. They are being removed after new optical cables were installed underground.

Dai Jin, director of the Xincheng neighborhood committee, said the most difficult part of the project was to get the agreement of all the residents.

“Some old people worried that optical cables are radioactive and will consume more electricity as the cables need a new router,” said Dai. “Some others worried planting new cables will jeopardize their interior spaces.”

The committee set up a service station in the lane for residents in case they became disconnected during the work. It also invited experts and social workers to explain to older residents why the work was necessary.

The coils of cables along the outer walls of the buildings had long been a problem in the neighborhood. Xu Lili, who has been living in the lane for over 40 years, said many people hung their clothes on the wires.

“Some cables were just hanging in the air,” said Xu. “Tall people had to bend down to walk pass through them.”

The removal of overhead cables is underway in several shikumen Lanes in Huangpu District. Xicheng Lane will be the first one to complete the process this weekend.

The city’s construction authority said the two sites are pilot projects as a more detailed plan is being discussed.

“The major difficulty we have encountered is the lack of land both underground for pipelines as there are already plenty of other pipes buried, such as water pipes and gas pipes, and above ground for transformer substations,” said Cui Shihua of the city’s construction authority.

“We have been trying to save more space by making substations as small as possible,” Cui said.

“But still it is not easy to find a vacant land in a metropolis like Shanghai.”

On Wukang Road, workers built substations in public greenbelt areas and on top of public toilets.

The campaign will soon be rolled out across the city and about 100 kilometers of overhead cables will be removed by the end of this year. Cui said much of the work would be done during the night to reduce the impact on traffic.

The city plans to get rid of 62 percent of overhead cables in the downtown area within three years.