The first morning of Pujiang Line’s trial operation on Saturday was not busy. Many residents in Pujiang Town in Minhang District took the new line to have a look at the city’s first automated passenger mover, a driverless train.

All motions of the train, including starting, braking, opening and closing of the carriage doors, are automatically controlled.

Shanghai Daily reporter boarded the train around 11am and saw many passengers, mostly children and elderly, scramble for the large windows at the head and tail of the train for the view.

The line starts from Shendu Highway where passengers can change to Line 8. It took about 15 minutes for the four-carriage elevated train to reach its destination at Huizhen Road.

Lin Xin and her 9-year-old son Ziyi boarded the train at Huizhen Road. Her family and friends were going to Pujiang Country Park near Shendu Highway Station.

“It saves us a lot of trouble,” said Lin, who used to drive her family to the park for weekend outings but find it hard to find a parking space. “The kids love the view and high-tech feeling on the train as it goes without a driver.”

Yu Miao, operation director of Pujiang Line, said the APM train allows a smaller radius of turning circle, making it easier to go through residential neighborhoods. But in the meantime, it would make the train a little bit shakier.

A staff member at the platform of Huizhen Road told Shanghai Daily that ideally only one or two officers are needed in an APM train station. “But since we have just started up, each station has six staff members to help out,” said the officer. “The real challenge will come on Monday, the first working day.” 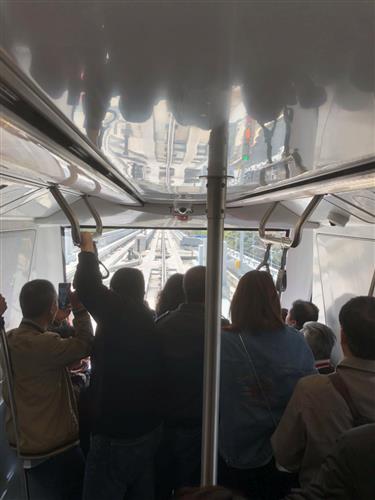 Passengers pack the front of the train of Pujiang Line to have a better view in Shanghai on March 31, 2018.