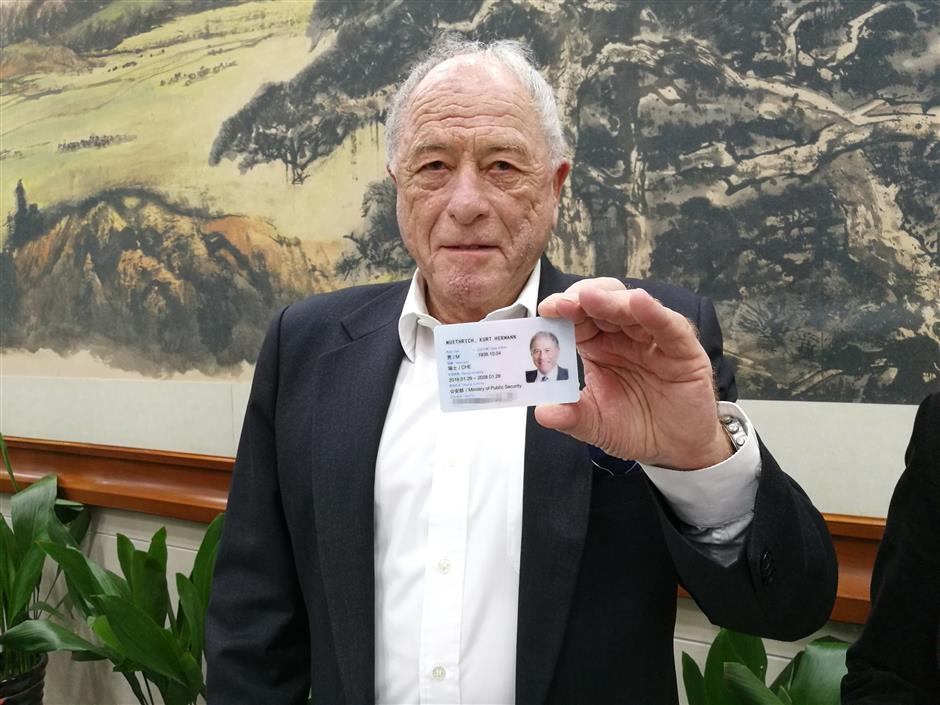 Due to his age, Wuthrich had to renew his residence permit every year, but in July 2015 rules for permanent residency cards, also known as green cards, were relaxed for outstanding foreign professional experts who work in the city. The age cap of 60 for work permits in Shanghai was also removed at that time.

The green card facilitates Wuthrich’s travel arrangements “and saves both him and the university a lot of trouble and energy,” said He Yulin, head of the human resources department of ShanghaiTech University, where Wuthrich is employed.

He received his permanent residence card, along with five others, at a ceremony held by Shanghai Exit-Entry Administration Bureau.

Wuthrich was the first Nobel laureate to receive the Chinese green card, according to Shanghai Public Security Bureau.

He shared the Nobel Prize in Chemistry in 2002 for “his development of nuclear magnetic resonance spectroscopy for determining the three-dimensional structure of biological macromolecules in solution.”

Wuthrich is now leading a team at ShanghaiTech to study the structure of the G-protein coupled receptors, or GPCR, which has huge implications for the pharmaceutical industry.

Wuthrich, who started to work in Shanghai in 2013, called the city one of his homes, which he enjoys and where he has been spending more and more time over the years as work develops. 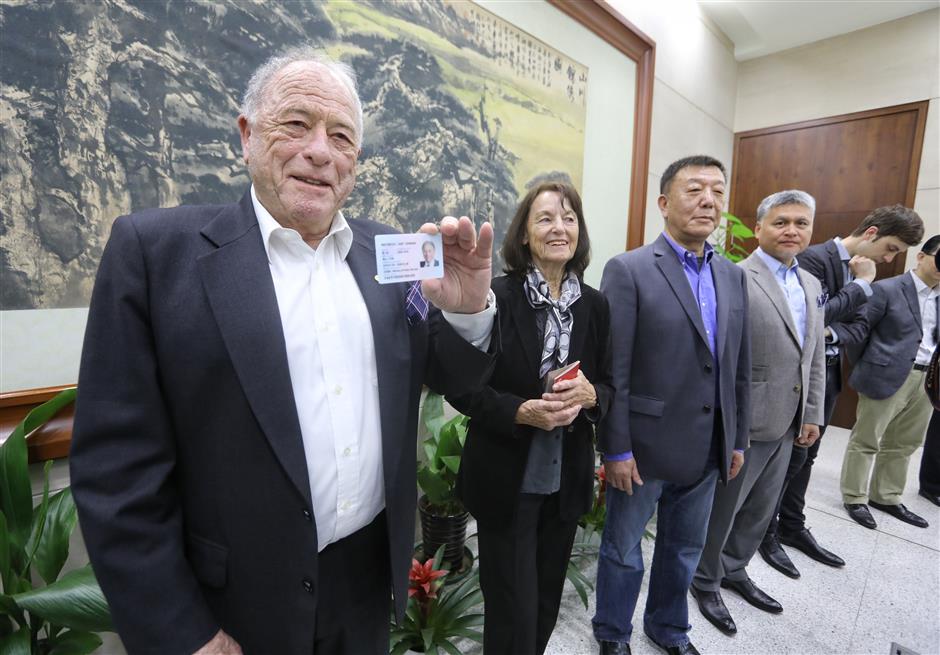 “We spent the past weekend at Century Park where trees are blossoming in the nice warm weather,” he said. “There are a lot of good restaurants and museums here, too.”

At the beginning, he said, “I had no students, and then I got students, machines and the new institute.”

Tudor Stefan Ratiu, professor of the School of Mathematical Sciences at Shanghai Jiao Tong University, was another recipient of the Chinese green card yesterday.

“Shanghai as one of the greatest cities in the world, the quality of the university and the abundant research funding together can attract very good people,” he said, adding that he has invited about 12 researchers from all over the world in the past two years to visit or join his projects.

As a result of visa reforms in Shanghai, qualified green card applications are no longer restricted to top scientists and scholars. Foreign nationals, meeting the required criteria in income and tax paying records or investing a certain amount of money in Shanghai, along with key members of research and development teams led by top scientists and outstanding foreign students are also able to be considered.

Lou Pengying, vice director of Shanghai Exit-Entry Administration Bureau, told Shanghai Daily that the bureau annually issued 400 to 500 green cards to foreign nationals in Shanghai in the past two years, while the total number of green cards issued since 2004 surpasses 4,000. She added that most of the green cards issued after July 2015 were a result of the relaxed rules.

Pascal Fritz, China representative of Vladi Private Islands Co and a young German expat living in Shanghai, applied for the Chinese green card last July on the income and tax criteria and was granted it yesterday.

Fritz worked for an international company in the medical equipment industry in Shanghai for seven years before starting his own business last January.

“China will become the largest market of any industry sooner or later, and the new green card rules greatly benefit entrepreneurs, which is very attractive.”

Holders of the permanent residence card, which is a chip-embedded card the size of a Chinese ID card, don’t have to bring their passports when taking a train or plane in China. It can also be used to access finance, education, hospitals, telecommunications, tax, social insurance, property registration and legal services in China with no other personal documents required.

Foreigners with a permanent residence card will enjoy the same rights as Chinese citizens.

Also yesterday, a new policy was introduced that simplifies the application of residence permits for working purposes.

The policy applies to applicants who are high-level professionals approved by the government or those employed by about 9,000 companies approved by Shanghai Science and Technology Commission as being from high-tech industries or other key sectors.

Qualified applicants can now apply online and get the permits within three working days at the exit-entry bureau’s counters. Previously they had to apply over the counters with required documents and wait five working days.