A gutsy investigator into the causes of death 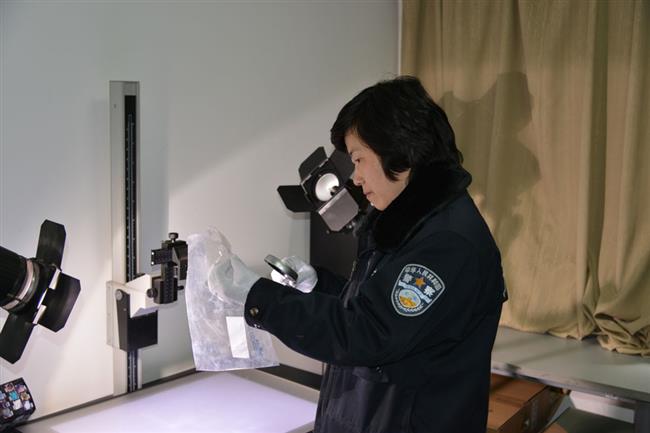 Li Lu checks an evidence in the lab. In over 16 years, she has dealt with 600 to 700 cases, investigating crime scenes and performing autopsies.

WOMEN are commonly seen working in forensic medicine on TV screens, often beautifully made up and wearing glamorous clothes. It’s a far cry from real crime scenes, where women are few and far between.

Li Lu can attest to that. She’s been dealing with dead bodies at crime scenes for 16 years as a forensic medical examiner.

“We don’t have many female forensic examiners because it’s too tough a job for many women,” said Li, 40, deputy director of the Criminal Science Research Institute with Jing’an District police.

“You never know when crimes will take place, and in many cases, they occur in the dead of night,” she explained. “I am on call 24 hours. It’s all in a day’s work to be awakened for a call-out just after I have gone to bed at home.”

Despite her fear of heights, Li has had to climb steep fire engine ladders to reach crime scenes. She has confronted corpses eaten by maggots. She has nearly fainted from carbon monoxide poisoning.

But the rigors and risks of the job don’t daunt her. For Li, her work is a dream come true.

At the age of 16, her father — a traffic policeman in Jing’an District — was killed while on duty.

“My father influenced me,” said Li. “I wanted to wear a police uniform, but I was rejected by the police school. So I decided to become a doctor.”

However, the dream of becoming a police officer never left her. After graduation, she took the civil service exam and was subsequently recruited by the Jing’an police.

The turning point in her life came in April 2002, when the then forensic examiner retired and Li became Shanghai’s first female forensic officer to attend crime scenes. Today, she is one of only two. Other women in forensic science work only in labs.

In her 16 years, Li has worked on 600 to 700 cases, investigating crime scenes and performing autopsies. She defies the stereotype of women as weak and squeamish.

“Men are stronger, but that’s their one and only advantage,” she said. “In many cases, both men and women will be queasy at a crime scene. It’s not a matter of gender. It’s about having grit and guts.” In fact, she said, women bring particular strengths to police work.

“Women are more careful and sensitive,” she said. “Victims’ families are more willing to talk to them.”

A crime scene can reveal many things to a trained eye.

Li recalled the time she was sent to examine the body of a middle-aged woman who had died. Her husband said he found her lying motionless on the sofa after he retuned home and he suspected she died of low blood sugar. It sounded plausible, but something didn’t quite seem right to Li.

“It was on a normal spring day, and the husband was sweating so profusely that he had to dry himself with a towel,” Li said.

Her instincts kicked in. Was the husband responsible for the death? She re-examined the victim’s head and found a laceration between the jaw and neck.

“There was no way that she could have injured herself in such a place,” Li said. “So I grilled the husband until he finally broke down and admitted that he had beaten his wife to death in a family dispute.”

Under her scalpel, all corpses reveal valuable clues to their deaths.

“Unlike doctors, what we do is seek the truth,” she said.

She has learned how to tell the difference between suicide, murder and natural death. She knows how to use rigor mortis to determine time of death. She has to take precautions against the possibility that a dead person may have had AIDS or tuberculosis. Above all, she respects the bodies of the dead.

Li said her most terrible experience came on a scorching summer day, when police were called to a neighborhood where people reported not have seen an elderly resident for days. His apartment was emitting a foul smell.

“As soon as I entered the apartment, I knew the smell came from a corpse,” Li said. “It was an extremely shocking scene. Maggots were crawling everywhere, and part of the body had already been eaten up.”

Despite the dark sides of her job, Li always manages a smile.

At home, she is like any other woman of her age. She likes listening to music, watching TV and helping her child with homework.

“I’m so lucky that my family supports my work,” she said. “Then again, my husband is also a forensic examiner.”