Pedestrians need a foot in the door of urban planning

Visitors look at a long scroll illustrating efforts by people from all over the world to build pedestrian passageways from 100 BC to the present during an exhibition at Shanghai Urban Planning Exhibition Hall. The exhibition runs from April 4 to May 31.

URBAN planners are being prodded to consider feet as well as wheels when designing the elements of how Shanghai moves.

The city’s rapid expansion of infrastructure, which has long addressed vehicular movement, has encroached on pedestrian passageways, making walking frustrating if not sometimes dangerous.

He pointed to Paris, with its iconic pedestrian-friendly areas filled with shops, restaurants and art galleries.

The show, entitled “Passages — Transitional Spaces for the 21st Century City,” opened in Paris in 2016 before going on a world tour. The Shanghai leg of the exhibition looks at solutions to rebalance development to serve cars, bikes and pedestrians.

“The city has long been designing infrastructure based on the demands of vehicles, neglecting the requirements of pedestrians,” Pan Haixiao, a professor with the College of Architecture and Urban Planning at Tongji University and curator of the exhibition, told Shanghai Daily. “Shanghai’s Inner Ring Road, for instance, makes traffic flow faster but is a major obstacle for downtown pedestrians,” he said. In many global metropolises, most urban public space is devoted to highways, railways and subways, while pedestrian passageways have been shrinking or disappeared, he added. 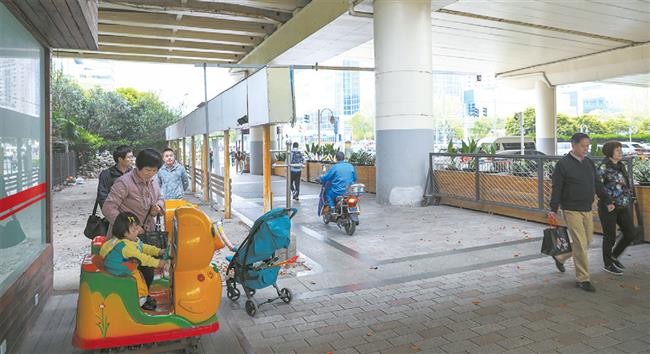 Pan also serves as China chairman of the City on the Move Institute, a French group that has been studying pedestrian spaces in more than 20 cities around the world since 2016. It is collaborating with Tongji University for research on the Shanghai walking environment. A common headache for pedestrians in the city, according to Pan, is that pedestrian passageways, especially near Metro stations, are constantly intersected by vehicle and bicycle lanes.

“It’s not always a quite good experience to walk on some pedestrian ways in Shanghai which are occupied by numerous sharing bicycles,” said Richard Brewer, an expat from Canada. “Sometimes, we have to walk on bicycle lanes that are filled with hurtling motorcycles.”

Pan said some progress is being made to better accommodate those on foot. 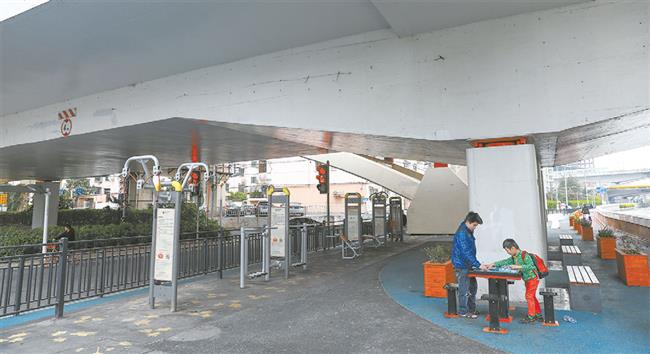 Among the sites where new design approaches are underway are the Yishan Road Metro Station, the Lujiazui financial hub, the former Shanghai World Expo site and the north plaza of the Shanghai Railway Station.

He cited the example of the Yishan Road Station, an interchange for three Metro line. Pan’s team designed pedestrian pathways, skywalks and public plazas near the station to make it more convenient and comfortable for commuters on foot.

The city government has developed 45 kilometers of pedestrian paths along the Huangpu River in downtown. It is now opening more footpaths on both banks of Suzhou Creek, and the initial 3.7 kilometers in the Changning District have already opened to the public.

Pan said he hopes the new exhibition will spur city officials to put pedestrians in the loop of urban planning. Indeed, design officials from the Shanghai Planning, Land and Resources Administration were among the first group of visitors to the exhibition. The first section of the exhibition sheds lights on the problems that people face when trying to get around major cities on foot. The second section looks at possible solutions, and the third highlights innovative ideas implemented in cities such as Barcelona, Toronto and Paris.

The Shanghai administration has invited global designers to come up with ideas for creating pedestrian spaces beneath the city’s elevated roads and subways. The downtown area has about 300 kilometers of elevated roads. Some of the open spaces under the elevated roads have been converted into parking lots, storage areas or greenbelts, but many other areas are serving no purpose and are inaccessible to pedestrians, officials at the administration said.

For starters, the planners are looking at ideas for the areas below the Yan’an Road Elevated Highway in Hongqiao, beneath Metro lines 3 and 4 near Zhongshan Park, and around four bridges over Suzhou Creek.

The 5-meter-high area beneath a 500-meter section of the Yan’an Road Highway, for instance, now serves as the entrance to a park and provides some parking slots. The area along the busy Yan’an Road West attracts few pedestrians.

Designers must create interesting public spaces to serve nearby residents, the administration said. They can suggest bold and innovative ideas, but they cannot affect traffic flows or alter the structures of elevated bridges.

The administration said he has already received more than 100 ideas from global designers or planning institutes.