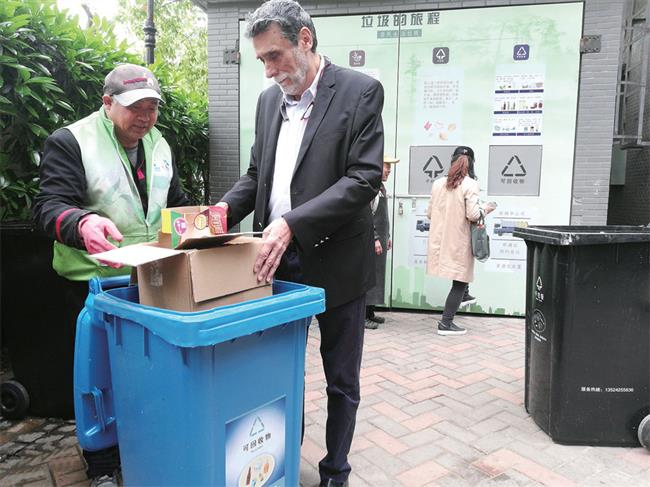 WHEN Ricardo Blazquez returned from an overseas visit to his home in the Huali Jiazu residential community in Changning District, he was surprised and delighted to find that a new trash-sorting project had started on a trial basis.

“It makes a community cleaner, and every community counts in the world when it comes to dealing with the problems of discriminate disposal of trash,” the native Spaniard said. “Garbage increases as consumption increases. Every citizen needs to cooperate in tackling this problem.”

Blazquez, who has been living in the community for over 20 years, said it was difficult at first to master all the sorting instructions of which trash to put where. But most residents, he said, seem to be getting the hang of it.

Huali Jiazu is the first Shanghai residential community with expat households to trial such a garbage-sorting program, which began on March 30. Nearly 20 percent of its residents are from China’s Hong Kong, Macau and Taiwan as well as Japan, South Korea, Europe, the US and other places. Half the residents are renters.

For starters, garbage bins were removed from each floor of the 14 buildings in the complex.

“When we took away more than 230 garbage bins overnight, we had no idea how residents would react,” said Sheng Hong, Party secretary of the Ronghua neighborhood.

An initial survey found that just 60 percent of households in the complex expressed willingness to participate in the sorting initiative.

Neighborhood committee officials and property management staff prepared the groundwork by distributing multilingual brochures about garbage sorting to residents and holding meetings with them to discuss garbage classifications of wet, dry, recyclable and harmful.

There is a permanent garbage dumping spot inside the complex, within a 10-minute walk of every resident, said Jin Weijie, an official of the Ronghua neighborhood. “To encourage more participation, we set up another two temporary spots to reduce walking time to two or three minutes.”

Red boxes for batteries, electronics and other trash needing special disposal have been set up.

Changing old habits is difficult. On the first day after the garbage bins were removed from floors, more than 100 households still dumped trash in hallways. Some households complained that the new garbage system was inconvenient.

“We tried to point out that garbage bins on floors posed potential fire risks,” said He Zhonglei, a property management manager of the complex.

For some reason, foreign residents seemed more eager to participate in trash sorting. 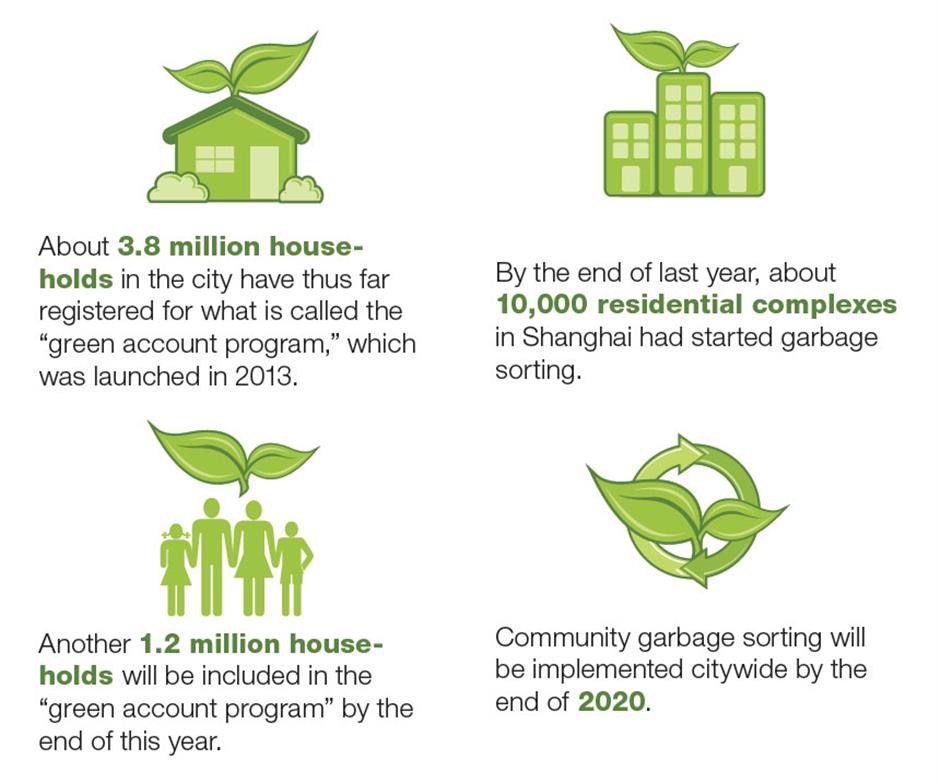 “Foreign residents are very supportive, and some said that the program should have started earlier,” said Jin.

Japanese residents assisted in a Japanese translation of garbage-sorting rules and helped promote the concept among fellow countrymen.

Blazquez said domestic helpers, or ayi, whose cleaning duties including disposing of household garbage, also need to be educated about the new sorting system.

“The difficulties are not in the community but in the home,” he said.

“The most important thing is communication with these housekeepers. You have to explain how to sort the garbage into the right bins. Sometimes they don’t understand or just don’t want to change old habits.”

Volunteers and cleaners are on site 12 hours a day to guide residents on sorting trash. The number of households refusing to cooperate in the project has been dwindling by the week.

“Some of those households say their property management fees should cover the responsibility of collecting garbage thrown in hallways,” said Jin. “It may take some time to change their habits, but we think they eventually will.”

To make garbage disposal more pleasant, the dumping sites will be planted with greenery and kept clean.

“If the trial proves successful, we plan to expand it to other communities,” said Hu Yu’ang, an official with Hongqiao Subdistrict.

Sixteen complexes in the area are scheduled to join in the second half of this year.

About 3.8 million households in the city have thus far registered for what is called the “green account program,” which was launched in 2013. Account holders accrue points when they sort garbage into appropriate bins.

The points are redeemable for items such as milk, soap, toothpaste, phone cards, tickets to tourist attractions and payment of utility bills.

The city’s environmental authorities have partnered with Alipay so that points can also be redeemed for coupons at online supermarkets. Community garbage sorting will be implemented citywide by the end of 2020.