Dayin Bookmall is the first bookstore in Pudong’s Lingang area and is promoting the “sharing book” concept that allows readers to borrow books for a minimal fee.

AS e-reading grows in popularity with more and more young people increasingly hooked online to their smartphones and tablets, it was said that the decline of traditional bookstores was nigh.

However, a recent resurgence of bookstores in the city has proved to the contrary. These bookstores not only sell books but are also places for people to relax with a book in hand and share their knowledge.

Marking the 23rd World Book Day yesterday, the Shanghai Press and Publication Bureau announced that more than 10 new bookstores had opened across the city this year. Some of them are old bookstores that have been renovated while others are new ones.

According to the bureau, more than 20 bookstores had opened last year. The new bookstores, with the support of the government, continue to “update” themselves and catch up with the latest market trend and readers’ taste.

On the Fudan University campus, Zhida Books, a small bookshop that mostly sold textbooks and student materials for 14 years, underwent a rebirth and reemerged as a “new retail” shop — but without staff. It is said to be the country’s first bookstore without any sales staff and is operating with the technical support of Alibaba’s business-to-consumer platform Tmall.

The couple, who own Zhida Books, also runs a popular online bookstore on Tmall. They sought cooperation with the platform and renovated the old store into an innovative unmanned bookstore.

But the couple were split on the kind of store it would be — the husband wanted to make it a store mainly for liberal arts like literature, history and philosophy, but his wife wanted it to be a general store where people can buy all kinds of books and even hold reading events.

The problem was solved by design — the store was divided into two parts and even had different decoration.

Yesterday morning, Zhida Books officially opened its door to the public with an intelligent system supplied by Tmall. After scanning a QR code, readers can enter the white-themed general bookshop. Further down, a “secret zigzag path” takes readers to the liberal arts section with wooden vintage bookshelves.

At the exit a camera identifies the reader — and the book by its RFID code. The gate opens after the payment is made with the smartphone.

The artificial intelligence has thus brought new life to the bookstore that connects online and offline consumers.

Xu Jiong, head of the bureau, said the “upgrade” of Zhida Books is a combination of traditional book-selling and modern technologies.

“We pay attention to the bookstores’ sustainable development,” Xu said. “It’s hard for these stores to profit only by selling books. So we are exploring new modes, such as ‘staffless store.’”

According to Xu, more new bookstores are likely to open later this year.

Longshang Bookstore in the East China University of Science and Technology used to be an old chemical engineering bookstore mainly selling textbooks and other student materials.

After renovation, its ordinary appearance was replaced by a simple but fashionable look — and is sometimes mistaken as a cafe. The interior decoration has been totally changed. The modern design makes it a comfortable place for college students and other visitors to relax and read. Drinks and desserts are also available. Some academic activities of the university will also be held there.

A young Taiwanese lady surnamed Lei, who owns a fashion studio, visited the store with her friend on a warm Sunday afternoon. Lei told Shanghai Daily that she would pass by the store often during the renovation period and waited for it to open the doors to the public.

“It’s very nice to see there is such a wonderful bookstore near my workshop,” Lei said. “Because I need a cup of coffee every day, the bookstore is a good place for me to grab a coffee and relax in the midst of the books.”

A first-year postgraduate student of the college, a woman surnamed Zhao, was busy with her books at the bookstore.

“I couldn’t wait to visit the place after I heard that it had opened,” Zhao, 23, told Shanghai Daily. “It has a good environment for reading and students will like it.” 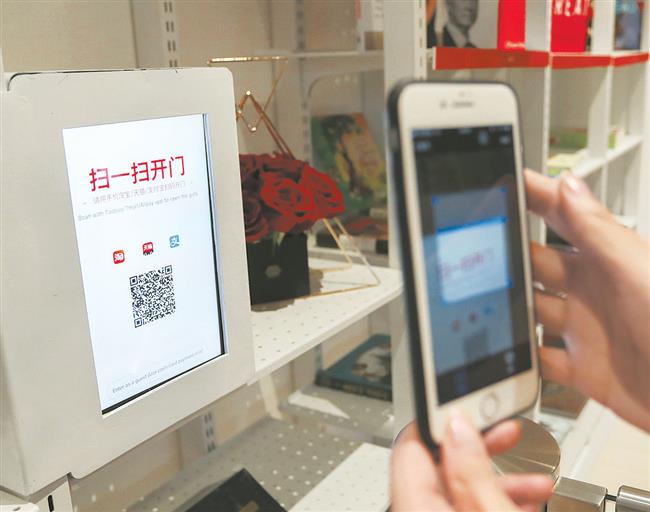 Another first-year postgraduate, a man surnamed Xiang, said although he prefers the convenience of e-books for reading, he felt “very nice” to sit and enjoy some time in the bookstore.

Sinan Books is located in Garden Villa, a three-story European-style villa on Fuxing Road M. that once belonged to the legendary general and patriot Feng Yuxiang. Yesterday, it celebrated the 4th anniversary of “Sinan Book Club.”

Four years ago, several local associations came together to set up the Sinan Book Club and Sinan Book Mart. It was well-received and was popular among local residents with more and more people turning up every Saturday afternoon for talks. Now, a real bookstore, Sinan Books, is up and running.

Writer Sun Ganlu, vice chairman of the Shanghai Writers’ Association and main curator of the Sinan book club and mart, said it is not a simple bookstore but one that combines cultural events and exhibitions. The store has its own book selecting team, consisting of professional from different fields, who search good books for readers.

On the fourth floor there are some old and rare original books.

Sheng Yun, one of the book selectors at Sinan Books, said in the beginning it was not easy to pick books from the hundreds and thousands of original English books, whose content and quality are hard to be determined just by their names. She had to rank books with the reputation of the authors. Sheng said thus there was always a chance that some good books by less well-known authors could be missed.

One day, she came up with the idea of having a “branch” of the London Review Bookshop at the Sinan Books. She visited the original store, sealing a deal that has proved to be a success.

In suburban Lingang area in the Pudong New Area, a new branch of Dayin Bookmall stands near Dishui Lake. It is the largest bookstore in the district — and the first bookstore in Shanghai to promote the concept of “shared books” that allows readers to borrow books for a service fee. Borrowing books in the first week is free and a fee of 1 yuan (16 US cents) per day is charged after that.

He Xuan, general manager of Dayin Bookmall, said generally about 150 to 160 books are borrowed per day. “The shared book concept makes the store not only a place just for selling books but also ensures that they are read by more people. Also, not-so-new books remain in circulation,” said He.

The latest national survey of reading showed that an adult Chinese read 4.66 books on average last year. Reading printed books was at 73 percent.