The Huangpu River greenway, mainly located along the former Expo site on the western bank of the river, offers a unique experience for jogging and cycling, made even better due to the efforts of police to keep all visitors safe.

Not one theft, robbery or fraud has been reported from the 4-kilometer area so far this year, thanks to a bunch of measures introduced since the end of last year to improve public safety at and around the greenway, police told Shanghai Daily on Friday. 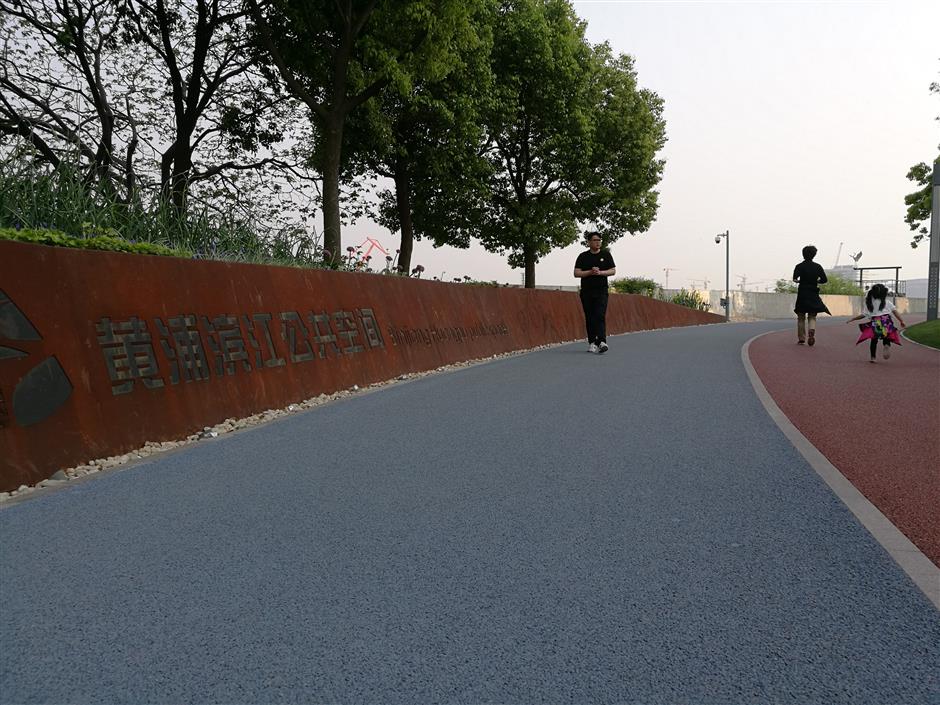 Evening hours see a lot of people taking a stroll, jogging and cycling at the greenway, but there are much fewer people on workday afternoons.

The greenway, as part of the 8.3-kilometer Huangpu riverside project which connects the Bund, the South Bund and the former Expo site, was opened to the public in July last year. It has separate lanes for walking, jogging and cycling.

Zhang Zheming, a police officer of Nanpu Police Station who was assigned to take charge of public safety in the area, said a few safety problems emerged after the opening of the greenway.

“Some bike riders and food deliverymen invaded the walking and jogging lanes, and some walking people took pets with them,” he said, adding that groups of people dancing to loud music also drew some complaints.

On new signs, pets, loudspeakers, roller skating, fishing and camping are clearly marked as prohibited — as well as kites.

“Kite string can easily become tangled on the many lamps along the greenway, and broken string can threaten the safety of those jogging or cycling,” Zhang said. 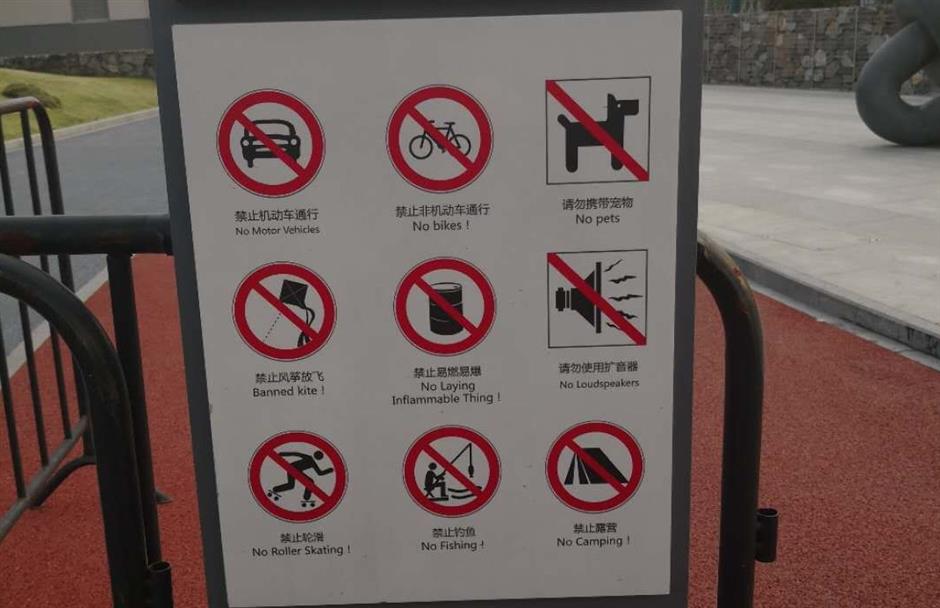 A sign at an entrance to the greenway indicates prohibited objects and activities.

Together with the subdistrict government, police now restrict groups of dancers to a certain spot on the greenway, allowing them in only between 7 and 8pm, with restrictions on loud speaker use.

Security guards from the property management firm of the greenway, at least one found every 100 meters, are told to ensure that all visitors observe the ban.

Zhang said regular training sessions are held for the security guards to inform them of the latest crime trends and instruct them to spot potential crimes.

They’re also told to turn away drunk people or those who take alcohol into the area, although drinking is not clearly stated as banned at the greenway.

“When they see lovebirds sitting around the place, they will come up and remind them to take care of their bags,” Zhang added.

Police have shared their surveillance cameras with the property management firm. The cameras, which cover almost all spots along the greenway, are monitored 24/7 by both police and the firm, with intelligence instantly communicated between the two parties. 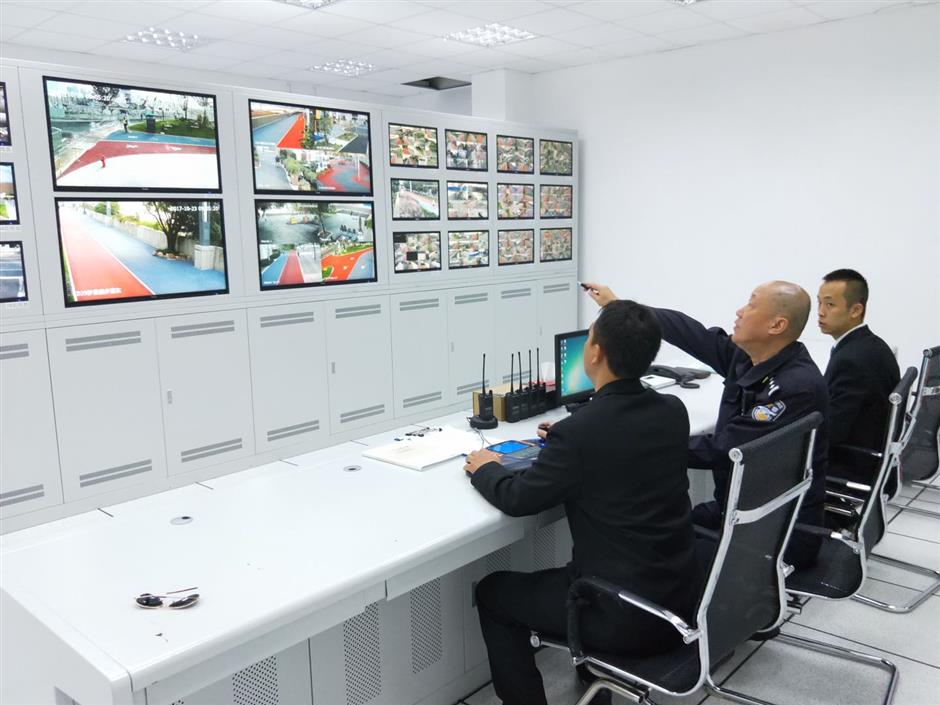 Zhang Zheming (middle) talks to property management staff of the greenway in a surveillance room of the firm.

Meanwhile, all lamp posts along the greenway have been marked with a unique number for people reporting issues to police. 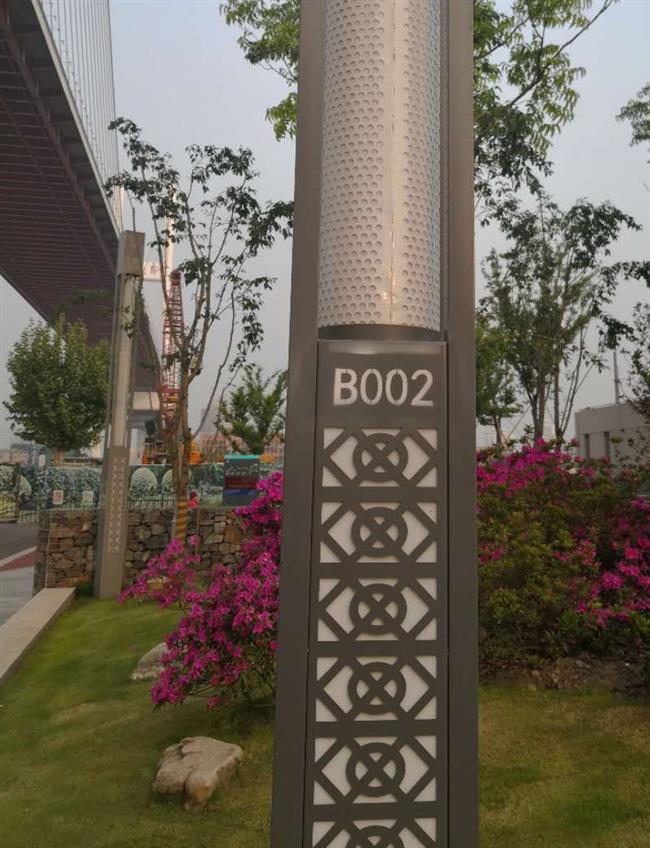 All lamp posts along the greenway are numbered to help those reporting incidents.

Zhang said that in recent months, police have only had to deal with one or two cases of bickering between people and visitors getting lost each month.

On Friday afternoon, a woman surnamed Yang who took her toddler to the greenway told Shanghai Daily that it’s a safer place than some nearby parks for kids to play, because there are no vehicles dashing in and out.

“Also when my boy sneaks off and I don't notice, the security guards would immediately get him back,” said Yang who lives in a nearby residential complex.

A man surnamed Hui, who works nearby and often runs 10 to 15 kilometers on the greenway in the afternoon, called it a safe place where security guards are “more in number than necessary.”

“It takes time for the rules to be understood by all, but people who come here are getting better at knowing them,” he said.