Yachts carrying wind bands cruise along the Huangpu River on May 1, part of the Shanghai Spring International Wind Music Festival. This year the musical feast attracted 177 wind bands from across the world.

Fanfares of pipe tunes loudly echoed across the Huangpu River during the past week as the Shanghai Spring International Wind Music Festival got in the swing from April 28 to May 4.

Hosted by Yangpu District, the musical feast attracted 177 wind bands from both home and abroad. And the gala announced itself in majestic style at the opening ceremony when 173 wind bands from across the country got together at the Fudan Chia Tai Stadium last Sunday night to perform the Chinese national anthem, “March of the Volunteers.” The gathering also set a Guinness China record for the most domestic wind bands to perform the Chinese national anthem at the same time.

Conducted by Yu Hai, president of the wind music society of the Chinese Musicians Association, “March of the Volunteers,” performed by 3,500 musicians, was a salute to the proposition of the national anthem law a year ago.

The warmest applause of the night was reserved for the Jasmine band from Yangzhou Special Education School. Although all of its members are blind, people could feel their infinite love for life and their vision for a better future.

A full play of “Walk toward Rejuvenation” and “Ode to Joy” by all of the bands at the scene brought down the curtain on the first day of celebration. 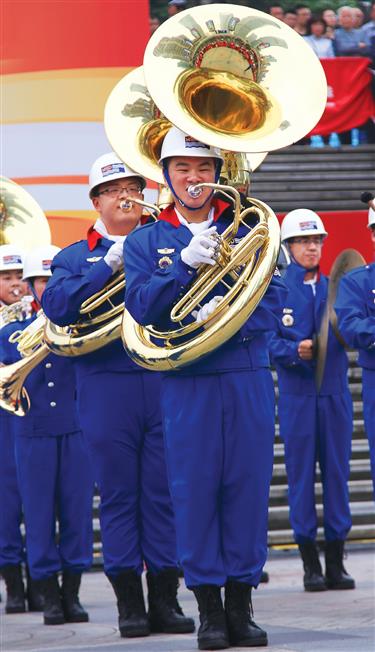 A band performs on the plaza of Oriental Pearl TV Tower.

The Shanghai Spring International Wind Music Festival was inaugurated in 2008 and has been held every year since then. The intentions of the gala are to popularize wind musical knowledge, support musicians, cultivate the market, offer foreign and domestic artists a stage and promote the development of wind music.

It has become a cultural icon of the city and a platform for Yangpu to demonstrate its urban spirit. The previous activities have won wide praise, mainstream media coverage and the enthusiastic participation from the broad masses of its citizens.

More than 50,000 musicians from 842 domestic and foreign bands have performed at the festivals since its inception a decade ago. 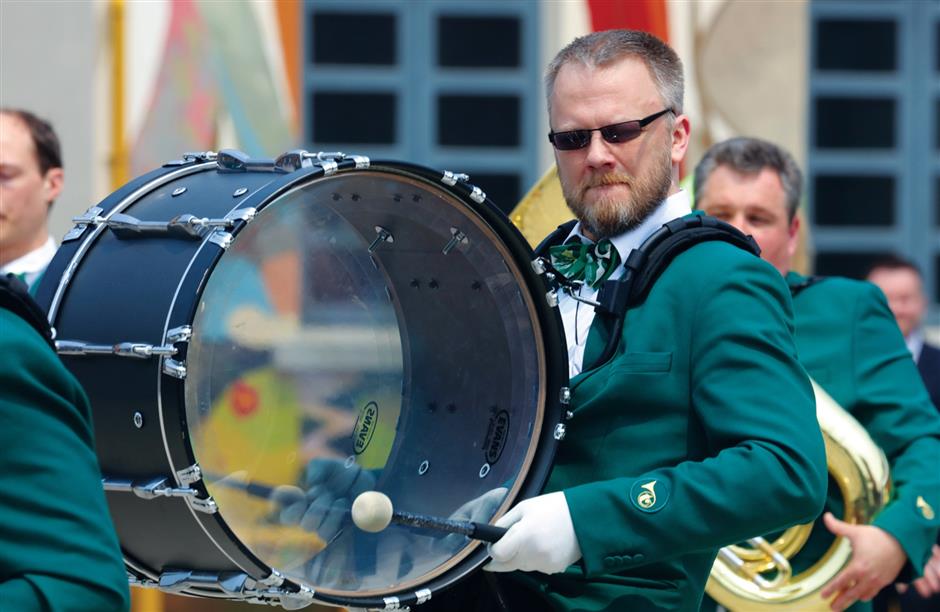 A band performs at the Shanghai International Fashion Center.

This year, the miracle continued with domestic and international bands appearing at famous landmarks all over the city. They performed at the Shanghai International Fashion Center on Sunday, the Oriental Pearl TV Tower Plaza on Monday, on yachts that cruise along the Huangpu River on Tuesday and at the birthplace of “March of the Volunteers” on Wednesday.

Musicians also performed at local campuses, shopping malls, communities and even on people’s doorsteps during the week-long festival.

At Shanghai International Fashion Center, next to the old textile factory houses, were a flourish of trumpets and dancing Lithuanian girls.

Students from Kashiwa Municipal High School performed the popular Chinese folk song “Jasmine Flower.” The clear articulation of the Japanese singers was a result of their continuous practice.

Two days later, six yachts carrying nearly 800 musicians set from Shiliupu Wharf and sailed all the way to the waterfront of Yangpu. Loud bugle sounds attracted myriads of people from across the river. 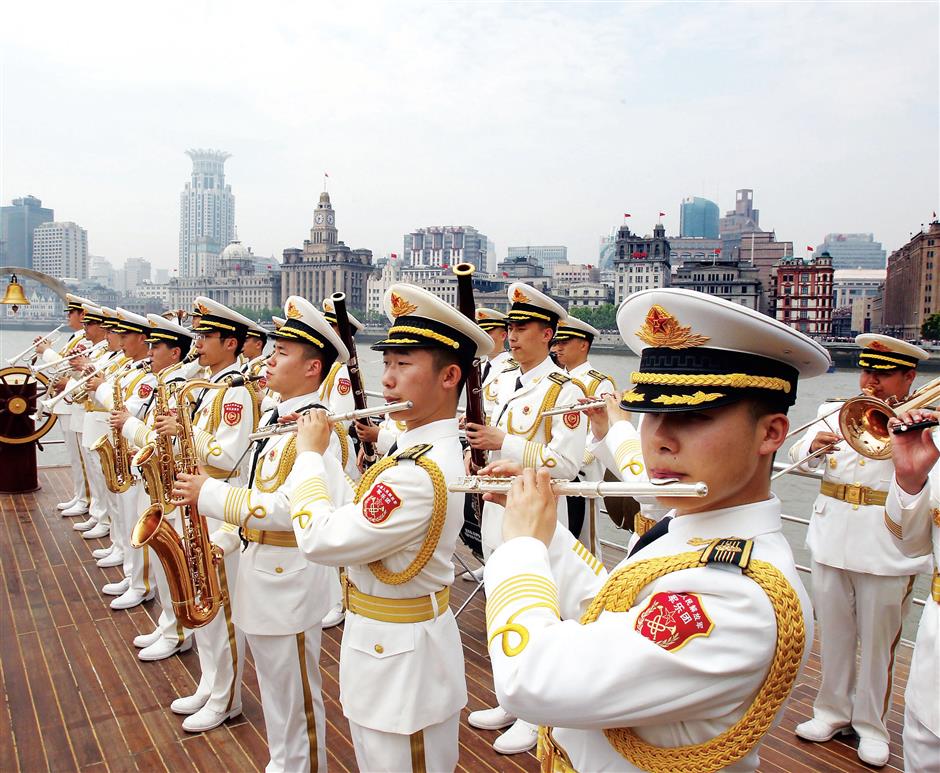 Onboard are 800 musicians including the Military Band of the Chinese People’s Liberation Army.

Other exciting songs, including “Ode to the Motherland,” won warm applause and cheering from the banks.

One of the major tasks of the festival is to carry forward socialist core values and mark the 40th anniversary of China’s reform and opening-up.

The onboard performance along Huangpu River, wind music gala and outdoor concerts during the festival were also part of Yangpu’s efforts to consolidate cultural confidence and inherit classics to unveil the organizer’s resolution to create a world famous brand.

During the wind music carnival, high-level performances were held at landmarks, communities and industrial parks to benefit more people, demonstrate urban spirit and set up a good image of the city as a global culture hub. 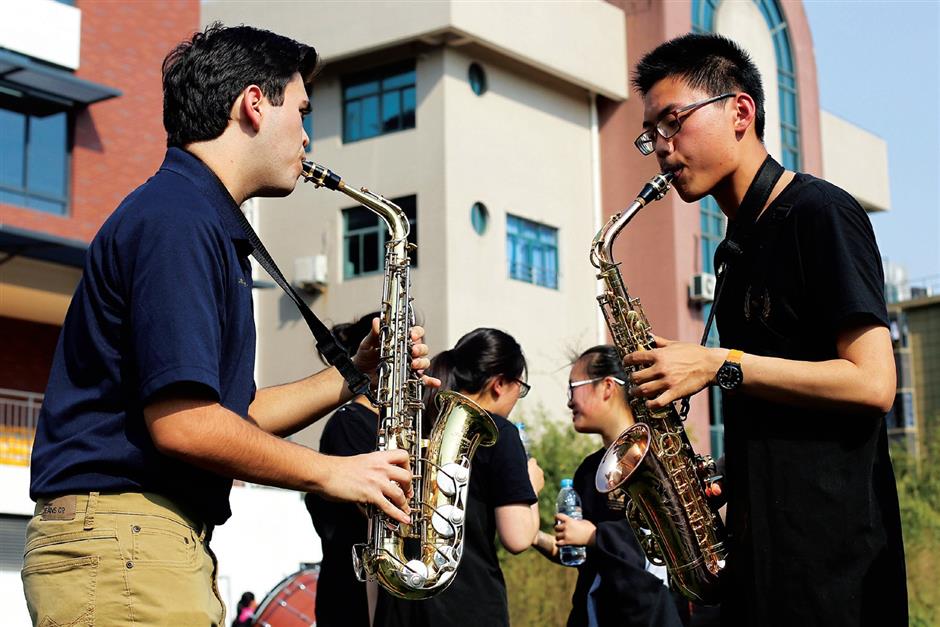 In line with the theme of “Fine Arts on Campus,” organizers worked with the local education authority to introduce the best performances at local universities, high schools and primary schools.

As a routine, activities were divided into two sectors: symphonic wind music and marching wind music. A total of 170 domestic bands from 20 provinces and cities and Macau took part in the festival this year. There were 133 bands last year.

The festival also further developed the mode of Internet plus culture. Strategies such as the airing of advertising video and webcasting were widely adopted during the warm-up, opening and closing ceremonies.