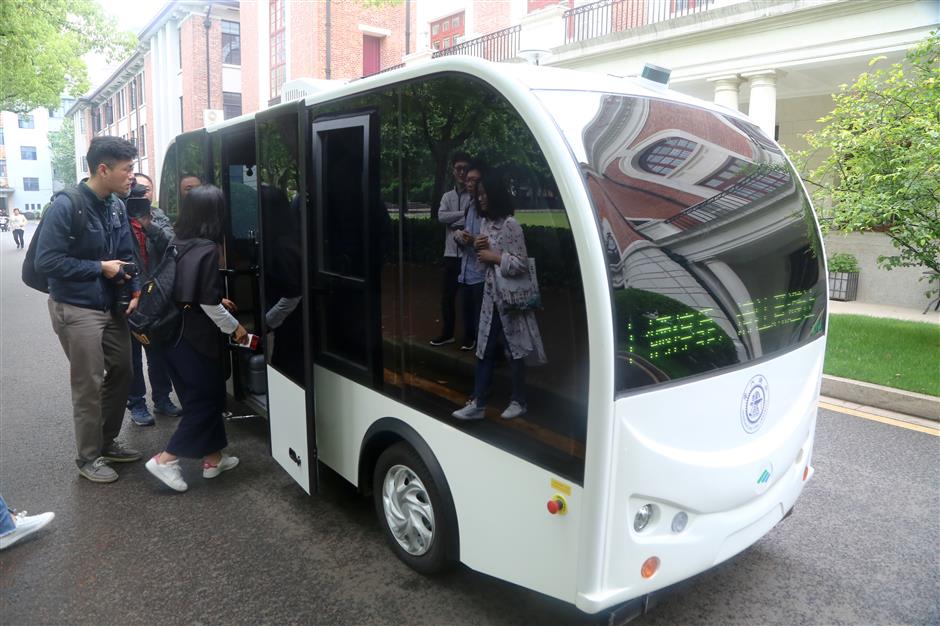 Shanghai Jiao Tong University has launched a trial run of a driverless minibus on its campus in Xuhui district, China Daily reported on Thursday.

The service, for on-campus commuting, uses an eight-seat vehicle developed jointly by the university's Research Institute of Intelligence Vehicles and a company specializing in automatic driving systems research and production, the newspaper said.

Guided by a map stored in the cloud, the bus can pick up passengers and take them to the stop they select by scanning a QR code.

There are currently four stops on the university's Xuhui campus. While on board, passengers can use a touch screen or speak to an interactive voice system to change their destination.

"It's really convenient for us to commute by bus on this expansive campus," Yuan Wei, a doctoral student, told the paper.

A monthlong test run was carried out earlier on the school's Minhang campus.

Since May 2, the three buses have carried more than 1,000 passengers safely at a maximum speed of 15 km per hour, according to Yang Ming, director of the institute.

"We installed sensors on the bus and used a special positioning and navigation system developed by the institute that can detect everything happening around the bus and manage it intelligently to avoid collisions," Yang told the newspaper.

"It's unlike driverless vehicles that rely on a real-time satellite positioning system, which can be affected by the surrounding environment and severe weather.

"The bus is also equipped with a core sensor that allows it to work properly even on rainy and snowy days, when people need the vehicle more than in good weather. A recharge of five to six hours can ensure a full day of operation."

To ensure safety during the trial run, a security officer on the bus can press a stop button if needed, even though he usually doesn't have to do anything, the newspaper reported. An emergency button is also available on the exterior of the bus.