Tender care for the youngest to the oldest

Wang Ke: Beating gender stereotypes and helping newborns get a start on life

Wang Ke, 23, is the only male nurse in the neonatology department at the Pudong branch of the Shanghai First Maternity and Infant Hospital.

“Taking care of newborns requires patience, concentration and dedication,” said Wang. “None of those traits has anything to do with gender.”

Indeed, International Nurses Day on May 12 honors all those who have committed themselves to helping the sick, frail and afflicted.

Neonatology is a sub-specialty of pediatrics that covers medical care of newborn infants, especially those who are born ill or prematurely. It’s a field dominated by female nurses.

Taking care of newborns may conjure up visions of changing diapers and bottle-feeding, but Wang’s work goes far beyond that. He has to deal with babies who have special problems.

For example, a baby born on May 1 was suffering from jaundice, and Wang had to put the infant into an incubator, monitor its condition and keep careful records.

“The only way they express themselves is by crying,” said Wang of his infant charges. “You have to figure out what they want from their crying.”

When the infant in the incubator started crying loudly around 1pm, Wang took her out and lightly touched her lips with a finger to see if the infant would think it’s a mother’s nipple. After confirming that the child was indeed hungry, Wang fed her with a bottle as he held her close to his chest.

“A baby will soon calm down once it is fed and feels someone’s heartbeat,” Wang said.

Before placing the infant back in the incubator, Wang changed her diapers.

“I get used to it,” he said, with a smile. “I often have to change my nurse’s gown twice a day because of baby bowel accidents.”

The infants’ parents come to see how their newborn is getting along during afternoon visiting hours. That may include breastfeeding as part of mother-baby bonding.

“The incubators simulate the temperature and environment of the womb,” said Duan Yi, head nurse of the department. “But we can’t simulate a mother’s smell or voice.”

Wang’s days are busy. He said he was once involved with more than 60 infants on one day alone.

Some infants sent to the ward suffer life-threatening conditions like severe jaundice.

In such cases, Wang said he thinks his gender plays to advantage.

“You have to keep a calm, cool head when explaining situations to emotional parents,” he said. “Sometimes female nurses find that hard.”

In 2017, the hospital saved 96.3 percent of all prematurely delivered babies who weighed less than 1,500 grams. The most serious case involved a newborn who was only 25 weeks old.

“Technically she was still a foetus,” said Duan. “She weighed only 545 grams and her intestinal system was incomplete.”

But after incubation, the infant survived. 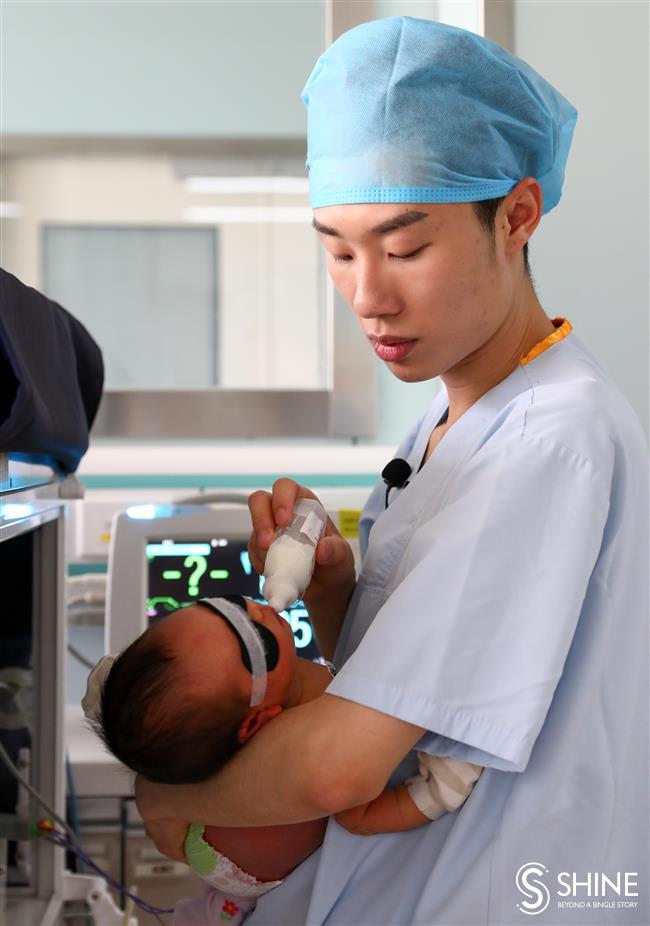 Wang Ke, a male nurse at the Shanghai First Maternity and Infant Hospital, feeds a newborn suffering from jaundice and who has had to start out life in an incubator.

Wang is not qualified to take care of premature infants yet because he has worked in the ward for only 10 months. It will take at least four years before Wang is allowed to handle a premature infant all by himself.

Most of the premature infants have trouble digesting. The only way to keep them alive and growing is intravenous nutrient solution. “I have a lot to learn,” said Wang. “Thankfully, I’m still young.”

Wang’s hospital is famous for its professional nursing. Almost half of the 1,400 staff in the three branches operated by the hospital are nurses.

Nursing was not Wang’s first career choice. In high school, he wanted to become a writer or a news anchor. But he said he finally chose nursing because it sounded like a promising major with good job prospects.

One experience during Wang’s internship changed his view on being a nurse. A dying old man grasped his hand while he was changing an infusion bottle.

“My grandson has finally come,” said the old man, with relief and happiness.

Wang was confused until the man’s family explained that his grandson never once came to visit him in the hospital.

“He mistook me as his grandson and wouldn’t let go of me,” Wang said. “It was heartbreaking.”

Wang said life can be so fragile. Being a nurse offers him the opportunity to ease the burden on patients.

“I’m not saying that I do a noble job, but it’s definitely important and it gives people hope,” he said.

Every infant that leaves an incubator and returns to a mother’s arms makes Wang feel fulfilled.

Duan said new blood like Wang invigorates the nursing staff. He is popular with colleagues because of his upbeat, sometimes humorous personality. He is also a minor celebrity on social media. His account on Douyin (Tik Tok), a popular short video app, has 1,200 followers.

In one short video he uploaded, he played a female role in a Chinese opera wearing his nurse’s gown. The video was viewed more than 400,000 times.

“Work hard and play hard,” Wang said of his philosophy. “Commit yourself to both.” 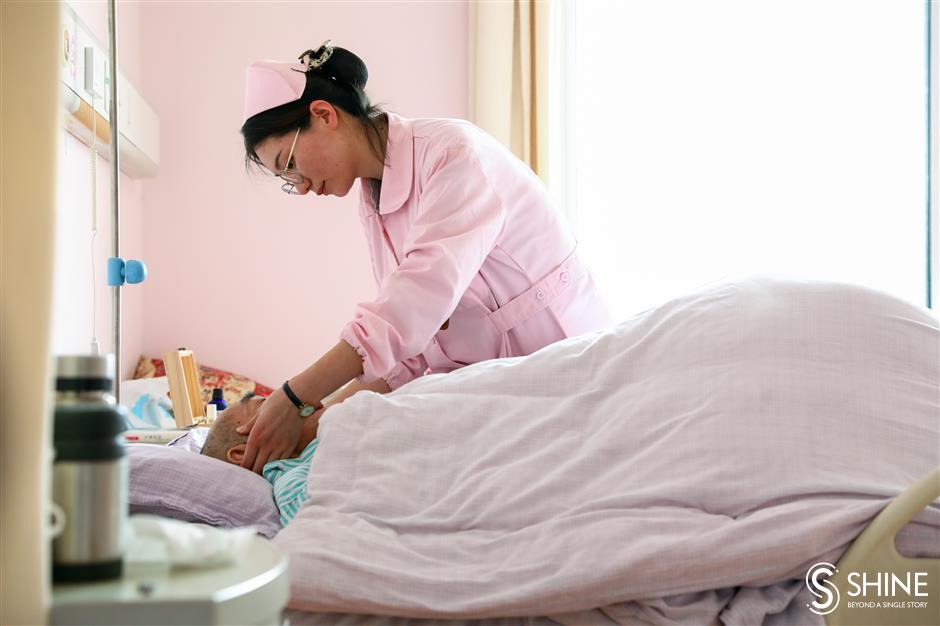 Wu Peipei: Bestowing dignity on those waiting at death’s door

Wu Peipei, 33, works in the “closest place to heaven.” She is a hospice nurse who tends to people in their dying days at Jinshanwei Community Health Service Center.

Hospice care is relatively new in China, but people have gradually come to embrace the concept of making the weeks or days before death as comfortable, dignified and pain-free as possible.

For nurses, palliative care is a hard job infused with sadness. They have to deal with patients who have no hope of recovery and families who are trying to come to terms with the loss of a loved one.

“I’ve been working as a nurse for more than a decade,” Wu told Shanghai Daily. “Two years ago, I started to work with the hospice team.”

She first had to come to grips with the fact that all the patients she sees have their days numbered and may slip away in her presence.

“I try not to dwell on it too much when I’m at work,” Wu said. “But it’s hard not to feel sorrow when you pass by the empty bed of someone who was talking with you just a few days ago, or even yesterday.”

Some 90 percent of patients at the center are suffering from some sort of terminal cancer. Since most receive only the minimum medical treatments required, they have more time to chat with the nurses and form transitory relationships.

Wu has plenty of heartwarming stories amid the heartbreakers. Like the man suffering from terminal cancer whose family never visited him. He was averse to light and always wanted the curtains drawn. His room was as gloomy as his mindset.

But during one conversation, he happened to mention that a special Shanghai cake made in Qibao Old Town in suburban Minhang District was a favorite of his. So the nurses went out and bought him one. It really changed his outlook.

“From then on, every time there was a festival, he would get flowers ordered online for the nurses,” Wu said.

Wu said her job requires calm, patience and kindness. Heart-to-heart talks with patients often lift them from their gloomy prognoses.

“These patients are no one special,” Wu said. “They are the people we all meet in our daily lives. And death awaits us all.”

One patient in Wu’s care is a woman with terminal breast cancer. A “cauliflower-like” lump at the joint of her neck and shoulder festered and stank. The woman was in poor mental condition when she arrived and refused any treatment.

Nurses finally persuaded her to accept a targeted drug that doctors said would relieve some of the symptoms and pain.

“We changed her dressings every day, and the lump actually shrank in size,” Wu said. “The patient developed a more positive attitude about her condition.”

Wu is one of eight hospice nurses at the center. She said such services really provide a public service as well as personal kindness.

“In the past, death was a kind of taboo, seldom talked about,” Wu said. “But now people are beginning to realize how important it is for the dying people to be well looked after before the end day comes.”

Yang Huifeng, head nurse and initiator of the hospice wards at the center, said psychological counseling is also provided for family members of the patients.

“We found that the families, witnessing the demise of loved ones, need support,” she said.

Shanghai has hospice wards in 76 community healthcare centers, with about 800 beds. According to Zhao Fang, department chair of social work at Fudan University, people deserve death with dignity.