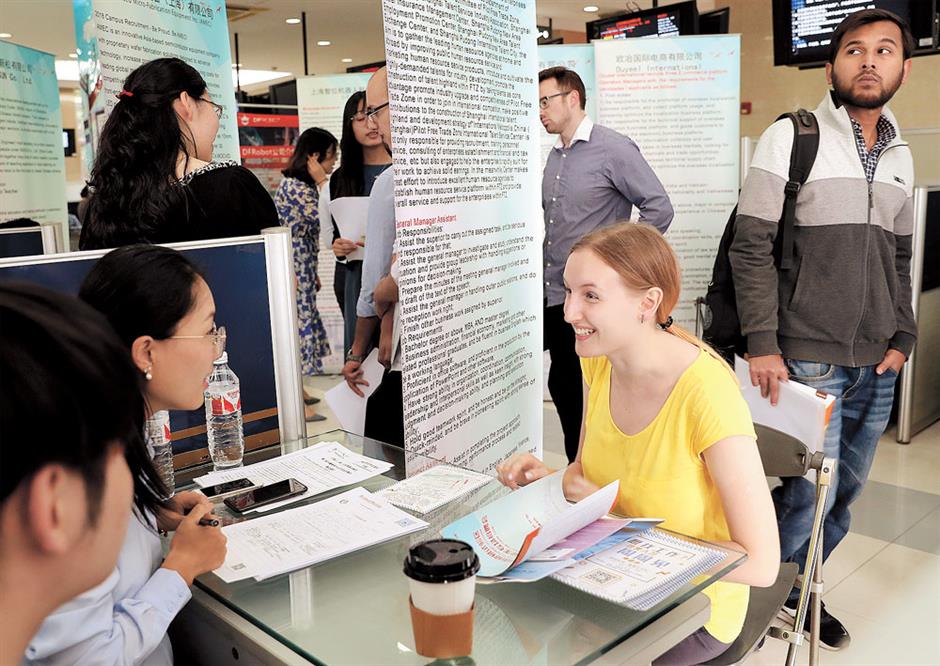 Nearly 150 foreign students attended a job fair yesterday where over 50 enterprises based in Pudong’s pilot Free Trade Zone offered a total of 478 positions in engineering, finance, marketing, education and sales.

The fair is aimed at encouraging foreign graduates from local universities to work or start their own businesses in the city, said the Administration of Overseas Talent of Pudong, which organized the event.

The applicants received a total of 181 job offers on the spot from companies that included state-owned AECC Commercial Aircraft Engine Co, which is behind China’s domestically developed aircraft engine, and local universities such as Shanghai Tech University as well as high-tech, trade, food and education firms based in the FTZ.

The Pudong administration has released a series of policies to support foreign graduates who want to work in the district.

Those with a bachelor’s degree, for instance, can now apply for a work permit in the FTZ. Previously, they had to have at least a master’s.

The students attending the fair came from 14 universities in Shanghai — such as Fudan, Jiao Tong and Tongji universities — as well as neighboring provinces.

Most of the applicants have studied at Chinese universities for over half a year and speak fluent Mandarin.

“The salaries are higher with better job opportunities in Shanghai than in many German cities,” said Steve Hilger, a graduate from Dresden who studied at East China Normal University.

“I plan to work for a global company here for a year, especially one that has business with Pakistan under the Belt and Road,” he said.

Anna Khorokhordina, a Russian post-graduate from East China Normal University, plans to work here for around three years or longer as a springboard for her future career.

“Positions at local companies like translator, secretary and investment analyst are all attractive to me,” said Khorokhordina, who acquired a master’s in international relations.

Many employers say foreign graduates have a language advantage, but must still have the right skills that are in demand.

“Most of the candidates are fluent in English, but it is still difficult to find professionals with sales skills,” said Trey Archer, sales manager with financial consultancy Z-Ben Advisors.

The government started the annual recruitment fair for foreign graduates in the FTZ in 2016 and more than 500 job hopefuls took part in the first two years — more than half of whom received job offers on the spot, the administration said.