Changning is intending to extend services to overseas talent in Shanghai’s neighboring provinces.

Foreign experts in Jiangsu, Zhejiang and Anhui whose employers have offices in Changning are expected to be able to benefit from the same privileges as those overseas talent in the district later this year.

Although the Hongqiao One-Stop Service Center of Overseas Talents is among the best of its kind throughout the country, Changning will set up five sub-centers and a number of counters in local communities to better serve expat workers on their doorsteps.

The sub-centers at Chengjiaqiao Community and ShanghaiMart will be available for enquiries, while the one at Gubei Civic Center will accept applications for Shanghai Residence Permits and Foreigner Work Permits from August.

Applicants for services at the Hongqiao center are only required to visit the counter at 999 Jinzhong Road once.

Changning was among the first in Shanghai, as well as the country, to pilot the Foreigner Work Permit when it was introduced in December 2016.

By the end of February, the center had issued 4,950 Foreigner Work Permits and served more than 17,500 applicants needing entry or exit paperwork.

Its services will be further expanded to become China’s most functional and efficient foreign professional service center.

This includes verification of their identities and those of their relatives, or children’s enrollment in local schools.

It will extend its services to foreign affairs and top-notch overseas talent included in “the Recruitment Program of Global Experts” (known as “the Thousand Talents Plan”).

Attracting the top-notch talent A top-level applicant with all the correct qualifications will get his or her Foreigner Work Permit in just one day at the Hongqiao service center. Moreover, Nobel Laureates, winners of the Turing Award or Magnolia Award and other first-tier talent, and their families, will enjoy privileges offered by Changning. 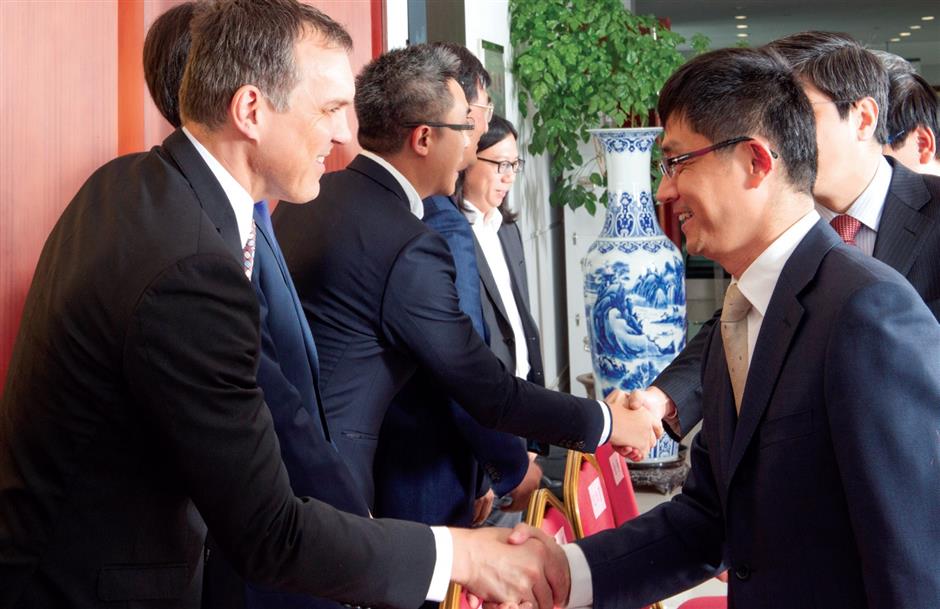 Kreibaum, who heads Clariant’s regional headquarters in Changning’s Linkong area, was twice honored with the Magnolia Award and wanted to apply for Shanghai permanent residency.

At the same time, his company was in urgent need of overseas talent and interns. But he and his colleagues were not familiar with the policy and the application process.

Officials from Changning and the city’s talent service center then provided services to both Kreibaum and Clariant (Shanghai), and his application for permanent residency was accepted, while his company was schooled on how to introduce overseas talent and interns.

Kreibaum and other foreign talent may also enjoy housing subsidies of up to 500,000 yuan (US$78,000), schooling for their kids, high-end health care and the most important, a public affairs specialist to help them deal with flight upgrades, legal advice to foreign exchange settlement and personal finances.

Tongren Hospital and Changning Maternity & Infant Health Hospital are two public hospitals which accept most foreign medical insurance plans, as do a number of private clinics and hospitals based in Changning.

Since top-notch talent as well as enterprises employing people from overseas can enjoy tailored services by the Changning government, others may seek help from agencies as the district human resources and social security bureau will outsource the services.

Changning also welcomes foreign entrepreneurs to start their businesses here. For those to launch their projects in the district, they and their team members would soon be granted Foreigner Work Permits.

Many overseas startups possess latest technologies, good ideas and competitive projects. Dozens of overseas startups express their intention to develop in Changning every year and there are very good ones among them.

A Sino-France internship program has been launched in Changning and the French Consulate General in Shanghai started working with the Changning authority for a breakthrough in the Foreigner Work Permit issuance to benefit overseas startups.

Changning has worked out a plan and is waiting for approval by the State Administration of Foreign Experts Affairs.

Moreover, the foreign expert bureau of Changning and the Hongqiao service center try their best to optimize services for foreign professionals.

The Changning-headquartered China Eastern Airlines buys aircraft and heavy equipment from manufacturers, such as Airbus. Airbus usually dispatches its engineers to support the after-service for four or five years.

Airbus has no offices in Changning and their engineers are not recruited by local firms. Hence, the engineers cannot get Foreigner Work Permits in line with the current rule.

Changning foreign expert bureau launched a “green channel” for Airbus engineers and set a precedent for the treatment of the same situation in the future, which was approved by Shanghai Administration of Foreign Experts Affairs. 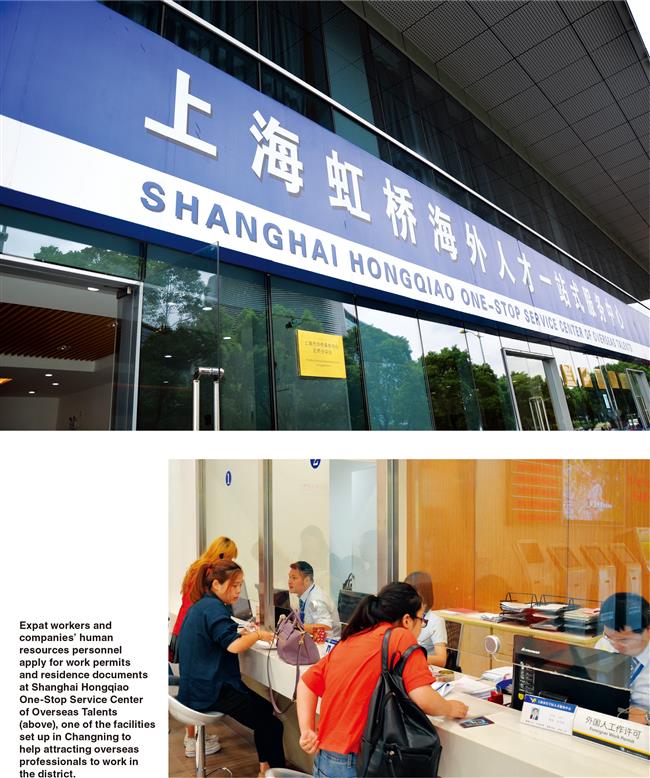 Expat workers and companies’ human resources personnel apply for work permits and residence documents at Shanghai Hongqiao One-Stop Service Center of Overseas Talents (above), one of the facilities set up in Changning to help attracting overseas professionals to work in the district.

The bureau explores institutional innovation when fulfilling its duties. It is expected to offer more tailored services for overseas exhibitors, government agencies and individuals during the upcoming China International Import Expo which will be held in November this year in Shanghai.

Around 70,000 residents from abroad are living in Changning, accounting for almost 30 percent of the city’s total foreign population.

One third of the consulates-general in Shanghai are in the district, while more than half of the diplomats and foreign consular officials also reside here.

Many of the expats cite Changning’s quality buildings, high level urban development, convenient transport and green landscapes for their deep affection for the district.

As well as enjoying the first grade infrastructure and convenient lifestyle, it is also hoped the district would build its own soccer and basketball teams, corp de ballet and symphony orchestra and offer foreigners more work and training opportunities.

Expats who work or live in Changning are deeply impressed by its well-developed transport, commercial facilities, attractive views and cleanliness.

Many foreign-funded companies have, or plan to, set up their regional headquarters in the area to enhance ties with local business.

The city is now sparing no effort to offer a variety of conveniences to overseas talent.

It canceled the 60-year-old age limit to apply or get work and residence permits for high-level foreign professionals in 2015.

If the applicants are recognized as “foreign talent” by the authorities, they could be issued permits lasting five years. And they can also apply for permanent residence permits after working for three years, if they are backed by their employers.