Shanghai Mayor Ying Yong led a delegation to visit Israel from June 5 to 7. During the trip, Ying successively met Eli Cohen, minister of the Ministry of Economy and Industry of Israel; Ofir Akunis, minister of Israel’s Ministry of Science, Technology and Space; Ami Appelbaum, chairman of Israel Innovation Authority; and Yona Yahav, mayor of Haifa.

Ying said the cooperation between Shanghai and Israel has great potential and Israel is known as a nation of innovation and it has so many innovation companies, especially in the applied technology industry. Whereas Shanghai has the advantages in technological personnel, technologies, capital and markets, so the two can deepen their cooperation in industries of communication technologies, artificial intelligence, biomedicine, integrated circuit and some others.

Cohen said technology industry is Israel’s strong suit and it has a comparable number of technological start-ups to that of the whole Europe. Shanghai and Israel can take advantages of their complementary advantages to strengthen their cooperation.

Akunis said Israel’s Ministry of Science, Technology and Space and Ministry of Economy and Industry are willing to jointly build a laboratory and the Sino-Israel Innovation Center.

Appelbaum said Israel Innovation Authority dedicates to the commercialization of Israel’s technological research findings and it wishes to strengthen the cooperation with Shanghai’s scientists, universities and start-up technology firms.

While meeting Yahav, Ying said Shanghai and Haifa established twin city tie 25 years ago and the two have carried out extensive cooperation ever since. Shanghai wishes to deepen the cooperation in trade, technology, port, and cultural industries with Haifa and enhance their twin city tie.

Later, Ying and Yahav also attended the signing ceremony of Shanghai International Port Co’s terminal project at port of Haifa. Ying said Shanghai is accelerating its construction of the international shipping center and Haifa is Israel’s biggest port city, so Shanghai hopes the terminal project can be a demonstration project for the two cities’ cooperation, promoting more in-depth cooperation. 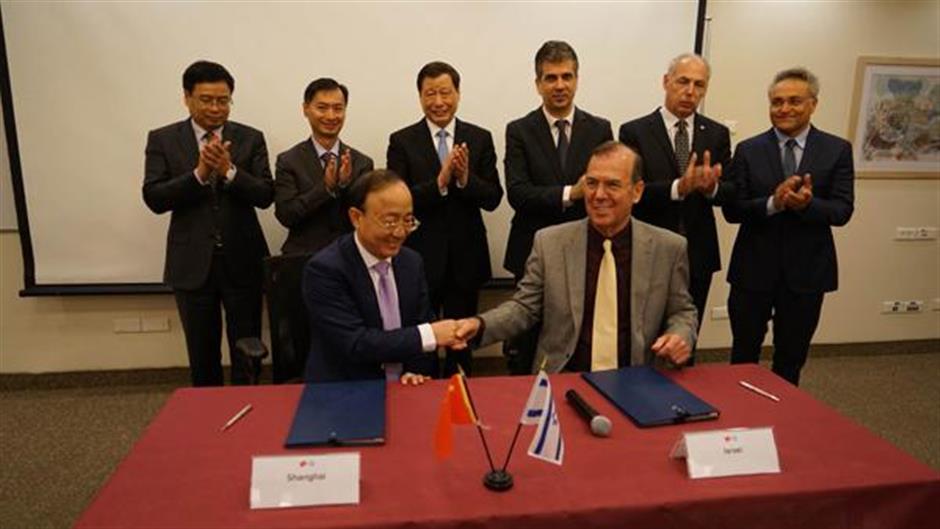 Shanghai Mayor Ying Yong(third from left) and  Eli Cohen(third from right), minister of the Ministry of Economy and Industry of Israel, attend the signing ceremony of Shanghai International Port Co’s terminal project at port of Haifa.